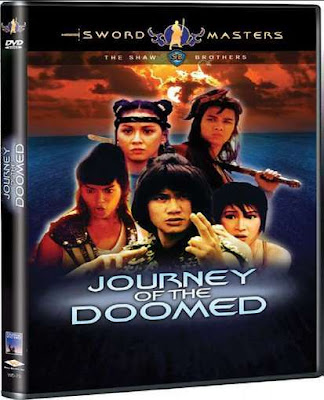 This chopsocky opus isn’t quite as wack-a-doodle as 1993’s EAGLE SHOOTING HEROES, but it puts forth the same basic “making-up-as-we-go-along” vibe. Despite having a number of kung-fu fights, its theme of young lovers who fall victim to the plotting of rival familes gives it more resonance with drama than with adventure. However, it’s still “Bad Kung Fu Drama” worthy of its own entry in the oeuvre of Leonard Pinth-Garnell. As it happens, I recently screened King Hu’s 1969 A TOUCH OF ZEN, another dramatic kung-fu flick which has (and deserves) a stronger reputation for its execution of an Asian Romeo-and-Juliet theme. Any comparison to ZEN would “doom” the JOURNEY to obscurity.

The “rival families” here aren’t the families of the young lovers themselves, however. Poor girl Shiuh-erh, working in a Chinese brothel in some unspecified medieval era, is revealed to be the bastard child of the late Emperor. This makes her a suitable pawn for two contending princes, one of whom wants to marry her while the other wants to kill her. Both princes (who never figure into the main action otherwise) send out their kung-fu-skilled knights to collect/kill Shiuh-erh. Two female knights seek out the brothel and slaughter all the half-naked lady prostitutes, though Shiuh-erh escapes into the wilderness. There she meets her “Romeo,” a good-natured ferryman (Tung Wai, whose character name eluded me). He takes the girl under his protection, but against one's expectations he's no Jackie Chan hiding his kung-fu light under a bushel. The hero really is just an average schmuck who can’t possibly oppose the highly trained knights.

Tung does have one advantage: he happens to be the brother of one of the female knights trying to kill Shiuh-erh. To protect her brother the lady-knight tries to shield Shiuh-erh. The other female knight finds out, and the two knights fight and kill each other as Tung escapes with Shiuh-erh. In what may the film's only interesting dramatic moment, the brother evinces heartfelt guilt over having caused his sister's death with his Good Samaritanism and resents Shiuh-erh for having brought him to this pass. Of course, both matters are forgotten once the two star-crossed fugitives fall in love.

Other agents from both princes continue to pursue the couple, and the film goes off the tracks trying to elaborate some of the background of these peripheral characters, as when we learn that a female knight on one side had a thing for a male knight on the other side. The romance between Tung and Shiuh-erh finally heats up when they take refuge in a seemingly uninhabited shack, though they later find that they’ve invaded the domicile of a mute hermit-woman. The film goes even further astray here, in that the female hermit (who’s the same age as Shiuh-erh) is tossed out as possible fodder for a three-way romantic conflict. Said conflict never develops, so one wonders why the writers created the hermit-character at all.
The whole thing resolves in a big fight between the two opposing knight-factions. The two young lovers get trapped in a burning building and perish in each other’s arms, the victims of both the machinations of high and low strata of society. The End.

Though the acting is marginally better than one sees in many chopsockies, the meandering storyline sabotages the actors’ efforts. Additionally, despite the presence of long-time fighting-diva Kara Hui, most of the fights lack even average professional choreography. Perhaps the director felt more comfortable with sex than violence, for there are a fair number of softcore scenes here. But none of those scenes, including the aforementioned “slaughter-of-the-not-so-innocents,” are as memorable as even one of the many balls-to-the-walls setups from a comparable work like 1990’s NAKED KILLER.

The film is largely of interest to me as a study in my AUM theory. As with another of the chopsockies I reviewed earlier, BRUCE LEE’S WAYS OF KUNG FU, the film falls into the uncanny-category I termed “outré outfits skills and weapons.” However, in WAYS the weird weapons commanded by that film’s villains are important to showing how bad-ass they are. In JOURNEY, there are two usages of an odd power or weapon, which together take up many two or three minutes of screen-time. In the first relevant scene, one of the male knights captures his female knight-enemy and bends her to his will using “kung-fu hypnotism” (illustrated by a comical-looking animated effect). In the second scene, the female knight immobilizes Brother with an odd weapon that sprays wax in his face, which his allies then have to peel off.
That these oddball phenomena are too humble to constitute “marvels” should go without saying. But they take up so little screen-time that I almost want to regard them in a special category of “the marginal metaphenomal,” in which the metaphenomena, whether uncanny or marvelous, barely participate in the main narrative. However, in order to keep my system consistent, I have to say that even minor effects-- a wax-spraying weapon, kung-fu hypnotism-- do transport this mostly forgettable film into the category of “the uncanny.”

This is not a categorizing problem confined to Asian martial-arts films. In my review of MADAME SIN, I mentioned that superspy films in a given series (such as James Bond) oscillate from one phenomenality to the other. MOONRAKER is clearly marvelous. FOR YOUR EYES ONLY is atypical. LIVE AND LET DIE is uncanny largely because of its fake-voodoo plotline, but even without the voodoo the film would still qualify as “uncanny” due to some of Bond’s low-level hardware, like a miniature circular saw in his wristwatch.

I should also note that in some works the element of “hypnotism” can become far more central: this includes narratives as different as the 1946 B-film THE STRANGE MISTER GREGORY and Nathaniel Hawthorne’s classic novel BLITHEDALE ROMANCE. So this film intersects somewhat with a category to which I’ve not yet examined in depth: “enthralling hypnotism and stage magic.”

ADDENDUM 8-29-2020: According to my later precepts, I have reclassified this film as a subcombative drama because the lovers are the main characters, and they don't have combative status.
Posted by Gene Phillips at 12:56 PM
Email ThisBlogThis!Share to TwitterShare to FacebookShare to Pinterest
Labels: diabolical devices (u), enthralling hypnotism and illusionism (u), outre outfits (u), the uncanny