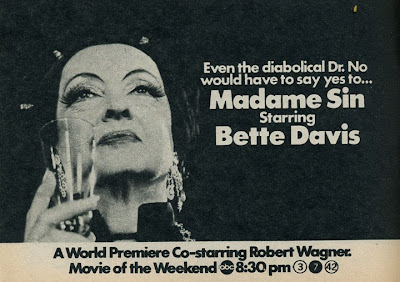 
Thanks to the generosity of a CHFB poster, I was able to get a look at this TV-movie, which I last saw on commercial television thirty years ago. It’s invariably described as a pilot for a prospective teleseries, but one wonders how stoned a network executive of the time would have had to have been, to greenlight a series in which Bette Davis, herself just a few years shy of the age of seventy, played a Eurasian-seeming criminal mastermind. Had the series come to pass, one assumes it would have turned out something like the 1950s teleseries THE ADVENTURES OF FU MANCHU, with the cunning criminal essaying a bizarre scheme each week that would ultimately be defeated by the forces of righteousness. It may be that the fearsome devil-doctor inspired this telefilm in more ways than one, as the last of the Harry Alan Towers series of cheap-but-lively Fu Manchu films had appeared on theater screens three years before MADAME SIN showed up.

Like the Towers films, MADAME SIN tries to suggest the visual scope of the James Bond films while camoflaguing the paucity of actual resources. In the hands of director David Greene, who shot SIN in England and Scotland, this means a lot of long shots of English scenery to give a sense of grandeur. But whereas most incarnations of Fu Manchu give the villain dozens of henchmen, Davis’s Madame Sin gets just a trifling handful of helpers—mostly Denholm Elliott, who bankrolls her schemes, and a small handful of male and female assistants. But like Fu Manchu she has a talent for suborning good guys to her service, which brings her to enlist disaffected agent Robert Wagner in her quest to purloin a nuclear submarine, for sale to the usual foreign powers.

Davis does have one other important similarity to Fu Manchu: the use of science-fictional weaponry. Umberto Eco fallaciously labeled the Bond films as “science fiction,” but films in the super-spy subgenre actually vary greatly as to what kinds of science-fictional toys they use. Some plunge fully into the arena of the “marvelous” (MOONRAKER, OUR MAN FLINT) while others merely employ a few gadgets (LIVE AND LET DIE) and so fit better into my category of “the uncanny.” Were it not for the type of weaponry employed by Madame Sin’s agents—an assortment of weapons able to stun victims with sound-waves—SIN would fit more neatly into the “uncanny” category. For all that I know, Greene and his cohorts may have written in the use of sonics just to avoid the expense of conventional fake-firearms. But even if the sound-guns are Madame Sin’s only super-weapons, they do give the story a needed boost.

The telefilm’s greatest weakness is that Madame Sin, though thankfully played straight by Bette Davis, simply doesn’t sustain much interest. She comes from nowhere and her desire to steal national monuments and the like doesn’t mean much. The only interpersonal relationship here is that in the distant past the Madame had some relationship with Wagner’s late father, who was also a spy of some sort. Thus part of her reason for suborning Wagner is to attempt a relationship of some sort with his son, thus putting the dominant sentiment of SIN right in line with Davis’s repertoire of “women’s weepie” pictures. We are spared any overt romantic overtures from Davis to Wagner, but she does end up repeating her history with his father by executing Wagner for betrayal. Thus the dominant function here falls within the sphere of Oedipal psychology, though once Wagner is dead “queen bee” Davis is quite ready to move on to her next conquest.

Perhaps needless to say, since the narrative tells us us nothing about Madame Sin's background, none of the sociological underpinnings present in the Fu Manchu novels and films is present here.
Posted by Gene Phillips at 1:51 PM
Email ThisBlogThis!Share to TwitterShare to FacebookShare to Pinterest
Labels: combative adventures, the marvelous