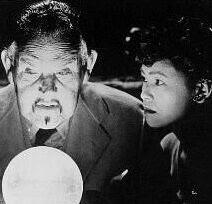 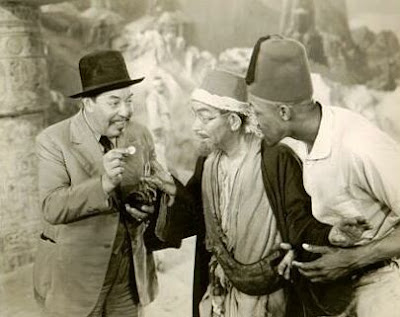 In contrast to my earlier review of CHARLIE CHAN IN HONOLULU, which I judged to be "atypical," here are two Chan-flicks-- one starring Warner Oland, the other Sidney Toler-- which fall into my category of "the uncanny."

EGYPT, one of Oland's films for 20th-Century Fox, is one of the better films involving a detective investigating a death supposedly caused by a curse-- in this case, an archaeologist who may have died due to the curse of the Goddess Sekhmet, after the man profanes an Egyptian tomb. Twice Chan and the archeaological party witness odd manifestations of the goddess: a beam of light from a mummy-coffin, or a strange glittering figure in darkness. The archeologist's son puts it down to the fact that Egypt is a land of "decay and death," but Chan naturally ferrets out a very human murderer. In addition to impersonating Sekhmet, the murderer also knocks off his victim with a complicated device: an ampule of poison gas, placed within the victim's violin in such a way that it will shatter when the violin hits a certain note. I should note that even if the film included no impersonations of a supernatural figure, this complicated device would move the film into the realm of "the uncanny" just by virtue of its farfetched nature.

The sociological mythology of the Earl Derr Biggers books comes through a little more in EGYPT, especially in the sequences that involved the son and daughter of the deceased archeaologist. Both seem upper-class types who are affronted at their father's having dragged them to this primitive land, which is a good correlate for European attitudes toward North Africa in that time. Naturally in 1935 no one would have questioned the right of Europeans to take away the treasures of ancient Egypt, but perhaps one can read a certain Euro-guilt in the fear of Egyptian curses as a whole. Interestingly, though Steppin Fetchit appears in his usual role of comedy relief, the script establishes that he came to Egypt because a fortuneteller told him that his ancestor came from Egypt-- a concept which a later generation of African-Americans would pursue in more earnest. And though Fetchit also must conform to the stereotype of the "black scaredycat," always concerned with "hants" and the like, one sequence does give Fetchit a little more heft, albeit still in terms of stereotypes. At one point the lights go off, and Fetchit finds himself struggling with what he thinks is some "hant," though it's only one of the white guys in the archeological mission. The lights come on, and Fetchit is at least poised to defend himself with a huge straight-razor! Again, the scene is still comic and plays with a routine stereotype, but it's a slight improvement over dozens of more demeaning "scaredycat black" schticks.

BLACK MAGIC is for the most part an average Monogram Chan, and in contrast to EGYPT its black comedy relief, the redoubtable Mantan Moreland, doesn't come across so well, lacking the wit he shows in other Chan outings. But MAGIC has one distinction in that it's one of the few films to seriously put Chan's life at peril. The film's "uncanny" motif centers around the power of a mysterious hypnotist-- later revealed to have been a stage magician in the past-- to cause people to walk off the tops of buildings. In the film's best scene Toler's Chan is victimized by the hypnotist, who puts Charlie under by shining two beams of light around the detective's eyes-- a much more visual concept than swinging a watch, to be sure. Chan comes very close to taking the big plunge himself, but squeaks out of it at the proverbial last minute.

As a side-note, this time out Chan is accompanied by a "number one" daughter instead of a son, played by an actress who shares the same name as her character, Frances Chan. Sadly, though she's just as determined as any Chan-son to emulate her famous pop, the young girl doesn't really do anything of note. (Frances appeared two years before in CHARLIE CHAN'S GREATEST CASE, where she was billed as "youngest Chan daughter.")
Posted by Gene Phillips at 2:46 PM
Email ThisBlogThis!Share to TwitterShare to FacebookShare to Pinterest
Labels: enthralling hypnotism and illusionism (u), phantasmal figurations (u), the uncanny