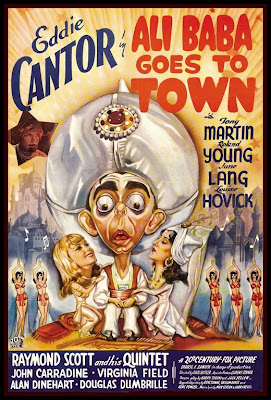 Prior to this my only entry for the trope "delirious dreams and fallacious figments" has been BLACK SWAN, because its protagonist's insanity caused her to have hallucinatory waking nightmares. However, the much lighter-themed ALI BABA GOES TO TOWN deals with dreams of a different sort, in which almost the entire story takes place in the protagonist's head.

BABA stars Cantor as a goony movie-fan journeying to Hollywood to collect autographs. That's really all the viewer ever knows about him, because his main function is to become an extra on the set of a Hollywood "Arabian Nights" fantasy, where he promptly falls asleep and dreams himself in ancient Bagdad. As in Twain's CONNECTICUT YANKEE Cantor quickly becomes revered as a sorcerer by the local sultan (Roland Young) and his people, while rousing animosity from evil conspirators Gypsy Rose Lee and Douglass Dumbrille.

The film's pace is lively but I suspect most of the jokes will prove tough sledding for contemporary viewers, particularly some hard-to-follow rimshots at the then-current politics of the New Deal. Similarly, some viewers will look askance at the political incorrectness of this particular "clash of cultures:" as in Twain's YANKEE, the first thing Cantor wants to do when he encounters another culture is to remake it in terms of his own. In one of the script's wittier twists, Cantor's attempt to get the sultan to become a popularly-elected president backfires when the people try to elect Cantor instead of the sultan. Winning the election, then, means that he loses his life, probably by being "berled in erl" (boiled in oil.)

And yes, Cantor does don blackface, but for what it's worth, it's part of a musical number in which everyone else in the number is really black, which calls some attention to the artificiality of blackface. Cantor did at least one other movie (whose title I can't remember) in which he donned partial blackface in the presence of real blacks, who look at him like he's the world's biggest ass. Finally, though some would object to the "language" of Cantor's black performers-- consisting of nonsense-riffs from Cab Calloway-- I found it pretty harmless, and think it at least *possible* that some black people of the time might've found that funny.

The best scene in BABA appears at the end, when Cantor has to fight Dumbrille aboard a flying carpet. Despite the expected use of rear-projection, it's still an exciting scene, during which Cantor injured himself and was voted an "honorary stunt man."
Posted by Gene Phillips at 3:36 PM
Email ThisBlogThis!Share to TwitterShare to FacebookShare to Pinterest
Labels: delirious dreams and fallacious figments (u), the uncanny