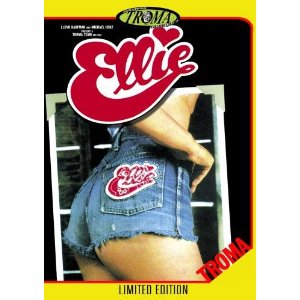 This line from the theme song playing over the credits of Peter Wittman's ELLIE (1984) is probably the height of the film's cleverness.  That, and the base idea of taking the rough plot of the Greek myth-tale of ELECTRA and updating it for the purpose of a cornpone comedy.
Most of the time this blog won't cover films which are obviously naturalistic in terms of their phenomenality.  For the most part the only time I'll cover them will be if there seems to be some doubt as to their nature; for instance, I view the phenomenality of Hitchcock's FRENZY as naturalistic, but it often does get listed in fantasy-films books alongside Hitchcock films that do deserve to be there, like PSYCHO.  No one would ever mistake ELLIE for a fantasy-film.  However, a fair number of hillbilly-horror films do create a sense of the uncanny, as seen in my review of CABIN FEVER. So I elected to use ELLIE as an example of the "weird families and societies" trope in its naturalistic mode.

In myth Electra's story revolves around her attempt to revenge her fatherAgamemnon, slain by her mother Clytemnestra and her lover Aesgistus.  Because Electra makes known her hostility to Clytemnestra, in some versions (like the Euripides play named after the heroine), Electra is married off to a low-class farmer so that she will bear no noble children to seek revenge; however, the farmer allows the marriage to remain in name only.  Electra doesn't have to wait for kids, though, because her grown brother Orestes returns, and the rest of the play concerns her persuading Orestes to kill the murderers of Agamemnon.

Wittman's ELLIE (which actually sports a pretty diverse cast of familiar faces, such as George Gobel and Pat Paulsen) is "Electra" told without an Orestes.  "Black widow" murderess Cora (Shelley Winters) persuades Ellie's aged widower-father to marry her, even though Cora comes with a pretty heavy retinue-- three grown sons and a "brother" who is actually not a relation, but Cora's secret lover.  The four men all pant like so many dogs after the virginal daughter of their new "dad," but the widower barely has time to register a protest before Cora dumps him in a lake and sits on him until he drowns.  (Agamemnon never had to tolerate that kind of abuse!)  Ellie accuses Cora and her sons of murder but the incompetent sheriff (Paulsen) is sweet on Cora and refuses to take action.

Ellie then uses her charms to lure all four men to their respective deaths.  Most of Ellie's plots are pretty ordinary, with one exception that justifies my assigning this film the trope of "bizarre crimes" in its naturalistic mode.  Having directly or indirectly offed the three sons of Cora, Cora's lover Art (the "Aegisthus" figure) faces her off with the intention of killing her.  As Ellie happens to know that Old Art has hisself a real bad heart, she talks him into taking her virginity before she dies-- which leads to a "heart-pounding" conclusion where she lives and he dies.

The conclusion is probably the oddest aspect of the film.  Ellie and Cora scrap a little when Cora tries to kill the heroine with a shotgun.  Yet Cora, already a murderess several times over, is spared by the film's script, in what seems like a riff on the Euripides ELECTRA.  In short, Cora is forced to marry a man she deems beneath her-- the amorous sheriff-- just as Electra was forced to marry a low farmer.  I gather that means that the filmmakers considered marriage to Pat Paulsen a punishment worse than death.

As for the "weird families" trope, Cora's traveling entourage of three sons and a lover is probably swiped from a similar role Winters played in 1970's BLOODY MAMA.  The three brothers lusting after their "sister" gives the film a quasi-incestuous tone, though oddly the script has one of them killed not by Ellie, but by a trap set by Cora for Ellie: a poisonous snake that bites the fellow to death just as he's preparing to rape the heroine.  So in this farcical rewriting, the evil mother and virtuous daughter both live; it's just the menfolk who get chopped off at the knees.