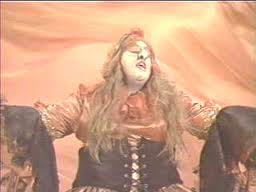 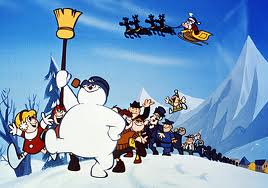 LEGEND OF FROSTY THE SNOWMAN is the former.  Since the original children’s song/story tells a very tale of a snowman coming to life and enchanting some kids out their dull routine, this feature-length extrapolation naturally attempts to pad out the original story into a tale with more conflict and theme.


MARY POPPINS centered on the actions of a well-meaning paterfamilias who attempted to force his family into a life of rigid conformity, only to have his eyes opened by the gentle influence of a supernatural nanny.  In LEGEND, a similar paterfamilias, Mayor Tinkerton, uses his authority to compel a whole town into obeying his arbitrary rules.  Later it comes out that the mayor was one of a group of kids who witnessed the original advent of Frosty the Snowman.  Tinkerton lost faith in Frosty’s magic when Frosty disappeared and didn’t come back as promised.  As an adult he overcompensated by becoming an anal-retentive rulemaker.  In contrast to POPPINS, LEGEND comes up with a villain to blame for the transformation: a bad kid stole Frosty’s magical hat and locked it away so that the snowman couldn’t come back.  Later the bad kid grows up to be Mayor’s second-in-command, Principal Pankley, at which point he finally reaps the benefits of his perfidy by usurping the mayor's position.  Thus the mayor’s son and his crew of grade-school friends have to learn how to “fight the power” and free the magical snowman.

LEGEND is, unfortunately, a lot like the laws in the mayor’s town: efficient but not very lively.  The narrator gets the best line as he observes the mayor’s confusion when his well-ordered town breaks down: “It’s when you don’t have all the answers that there’s room for something wonderful to happen.”  But the writers and animators don’t have any concept as to how to make Frosty’s return seem wonderful.  The movie’s heart is in the right place; its head simply doesn’t know what to do about it
.
PUFNSTUF, a feature-film version of a live-action kids’ TV show, comes a little closer to creating a sense of wonder, if only because it isn’t shackled to any particular theme. I’m not familiar with the TV show, but I assume that the feature film pretty much recapitulates the show’s first episodes, as PUFNSTUF starts from square one.  English boy Jimmy (Jack Wild) feels tormented by his feelings of being different from American schoolkids, so he wanders off and finds a magical talking flute who becomes his new best pal.  The flute, Freddy by name, leads Jimmy to a magical land called the Living Island, inhabited by talking trees, owls, clocks, and a big two-legged dragon named Pufnstuf, who’s the mayor of the community.

(Try though I did, I couldn’t find any marijuana jokes in the film.  No one but the villain ever complains of hunger, and she wants to feast on Pufnstuf.)

Just like Dorothy’s first visit to Oz, Jimmy’s appearance on the Living Island provokes the appearance of said villain: Witchiepoo (Billie Hayes).  Witchiepoo, anticipating a big witches’ conclave with the “Boss Witch” in attendance, is willing to kill Jimmy and all the beings of the Island so that she can possess the magic flute and impress all of her witchy friends.  Her first foray is repelled, so she resorts to chicanery to get the flute, and from then on the flute goes back and forth like a bone fought over by two dogs.

None the whimsicalities in PUFNSTUF’s world possess the deeper symbolic resonance of any versions of Oz, but they’re diverting, at least.  The standout scenes take place during the longish climax in which Jimmy must masquerade as a witch to gain entry to Witchiepoo’s party.  There are some amusing bits—Boss Witch (Martha Raye) has for an assistant a talking rat in a Gestapo uniform, and she says things like “for Satan’s sake.” (I’m aware that bonafide modern witches don’t worship Satan, but I can’t imagine any of them taking offense at this batch of  “happy harpies.”)  Ultimately Jimmy and his friends save Pufnstuf by invoking the powers of good—which, in contrast to the world of Oz, seem suspiciously absent.  One of the Island-critters observes that witches are frightened by both angels and good fairies, leading me to note that the film is nothing if not even-handed in this mingling of Christian and pagan presences.  Jimmy and his friends decide to masquerade as angels.  They drive away the witches, save Pufnstuf and the flute, and frustrate Witchiepoo for the time being-- until the next go-round.

Possibly the oddest thing in PUFNSTUF is not any of the talking critters, but the fact that one of the minor witch-characters, Witch Hazel (Mama Cass Elliott), performs a song for the other, supposedly evil witches—a song entitled "Different" that speaks perfectly to Jimmy’s sense of being different. All of which comes much closer to getting across the Importance of Being Different than one ever gets from the mediocre FROSTY flick.


Posted by Gene Phillips at 11:05 AM
Email ThisBlogThis!Share to TwitterShare to FacebookShare to Pinterest
Labels: the marvelous