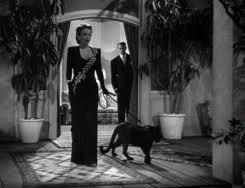 In my reviews of two other films in the repertoire of producer Val Lewton, SEVENTH VICTIM and GHOST SHIP, I've noted a motif I called the "Jane Eyre" myth, in which one character must supplant another in order to gain romantic happiness. I find the same myth present in Lewton's CAT PEOPLE, but not in the equally-feline subject of this review, LEOPARD MAN, though I do think there's a strong related motif, in which feelings of envy are passed from character to character like a supernatural curse. Since LEOPARD MAN is purportedly a reasonably faithful adaptation of the Cornell Woolrich novel BLACK ALIBI, it may be that the novel's close but not identical thematic focus were what interested Val Lewton in the property.

The opening scenes of LEOPARD MAN fairly drip with one kind of envy or another. In the fictional Mexican city of Ciudad Real (a "fake city" name for Mexico City), we first see two women backstage at a club, one a cigarette-girl, the other Kiki Walker (Jean Brooks), a singer-performer at the club. There's a moment of envy expressed by the cigarette-girl as to Kiki's superior position in the pecking-order, but the two ladies join in dissing a third woman; the Mexican castanet-shaker Clo-Clo (Margo), because she's popular with the club-patrons due to her exoticism. As the cigarette-girl leaves, in comes Jerry Manning, who's decided to take a rash action to help Kiki upstage Clo-Clo. Minutes later, while Clo-Clo is still performing on stage, Kiki, clad in black as the illo shows above, enters the club with a black leopard on a leash.

Unfortunately for Kiki and Jerry, Clo-Clo reacts badly to being upstaged: she clacks her castanets so loudly that she frightens the leopard. The animal breaks free of Kiki and vanishes into the city. Jerry, who has hired the leopard from a local animal trainer (the first person to be called a "leopard man"), is duly remorseful for having brought about a danger to the public, but he puts off paying the wrangler for his animal in the hope that the creature may be recaptured. However, the creature, confused by its freedom amid the lights and noise of the city, goes berserk and kills a lone girl, at which point the local cops start looking for it a lot more assiduously.

Lewton had gained some repute for "stalking scenes" of the type seen in CAT PEOPLE and SEVENTH VICTIM, and the one with the lone girl is the best here. Interestingly, shortly after the leopard gets loose, a fortune-teller draws the ace of spades for Clo-Clo, but after she greets the young girl in the street, it's as if she passes her fate on to the girl. Later yet another girl is killed while trying to hold an assignation with her lover. The fortune-teller's next prophecy involves Clo-Clo getting money from an older man, which does come true, but it doesn't do the performer any good, for her deferred fate finally catches up with her.

Given the film's title, I doubt that any viewer in 1943 expected the film to be purely about the depredations of a leopard on the loose, even before Jerry suspects that there's some human agency behind some of the killings. The animal trainer, having passed out once during the second killing, wonders if he's committed some horrible act, and asks the sheriff to lock him up-- which, as any good filmgoer should realize, is the filmmakers' way of exonerating him when the third murder takes place.

The script doesn't provide many other suspects, so there's no big surprise when the "leopard killer" turns out to be Jerry's confidante Dr. Galbraith, who was once a "zoologist" before he unaccountably ended up running a small museum in Ciudad Real. Galbraith happens to have seen the "broken" and "mangled" body of the leopard's first and only victim, which inspires him to become a serial killer, though one sane enough to attempt leaving clues to incriminate the leopard. In truth, Galbraith actually shoots the leopard in the country and leaves it there, making it possible for Jerry to destroy that alibi. It further comes out that Galbraith's thinks of the leopard as something of a totem of violence, invoking the Aztecs' similar thoughts on the jaguar. Jerry, accompanied by the bereaved boyfriend of the second victim, overtakes the killer, and the boyfriend saves the city the expense of a trial.

I found the moral compass of SEVENTH VICTIM fuzzy, but I admire the moral theme of LEOPARD MAN. Although Jerry and Kiki might be accused of having been rash in trying to play the publicity game, they're both clearly conscience-stricken by the damage they've (literally) unleashed. To some extent, Jerry's quest to unveil a human agent has the added effect of exonerating him from some of the fatalities, though it could be argue that he's still responsible for bringing Galbraith's insanity to the surface. Still, the two Americans don't dodge their responsibilities and do their utmost to correct the situation.

As I've detailed elsewhere, all of my ten tropes are capable of having either "naturalistic" or "uncanny" manifestations. If the leopard as presented in LEOPARD MAN had been the sole menace, this would have been a purely naturalistic manifestation of the "astounding animal" trope, for there's never any suggestion that the leopard is anything more than an animal. However, Galbraith participates in "uncanny" versions of both the "perilous psycho" and "bizarre crimes" tropes. However, with respect to the "phantasmal figuration" trope, this would be a "naturalistic" manifestation, because the criminal is covering his actions with the appearance of normality, rather than (say) pretending to be a ghost, smiling or otherwise.
Posted by Gene Phillips at 3:40 PM
Email ThisBlogThis!Share to TwitterShare to FacebookShare to Pinterest
Labels: astounding animals (n), bizarre crimes (u), perilous psychos (u), phantasmal figurations (n), the uncanny