ODYSSEUS: VOYAGE TO THE UNDERWORLD (2008) 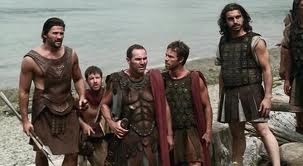 
The Sci-Fi Channel has certainly aired many made-for-video/cable flicks that are worse than ODYSSEUS: VOYAGE TO THE UNDERWORLD.  But I suppose this item-- which I caught in a rerun buried in the wee hours-- annoys me because it's so indifferent to being bad, or (even worse) to being boring.

I recognize that this film probably came about not because someone was burning to tell the untold tale of Odysseus meeting Penelope, Queen of the Dead, but because some producer put up the needed money and someone else found that the studio could film something, anything, cheaply at such-and-such a location in Romania.  I have nothing against "desperation film-making," where the filmmakers are essentially throwing everything possible at the audience to keep them in their seats.  What I dislike are filmmakers who throw things in a desultory manner, not even trying to "hit" anyone.

The Italian muscleman films of the 1950s and 1960s were probably made for roughly similar reasons.  Got some togas left over from THE ROBE?  Let's do HERCULES.  Got some 16th Scottish costumes lying around?  Let's put archaic hero Maciste in Scotland to fight witches (Maciste in Hell, 1962).  But though there were some dull *peplums* as well, at least they usually tried to get their basic mythology right.

Quick summation of the VOYAGE: thanks to the song of the sirens, Odysseus and his men (including the ODYSSEY's author Homer) end up stranded on an island filled with marauding harpies.  They meet a strange woman who will help them get off the island if they take her with them.  The only problem is, when no one's looking she turns into a gigantic smoke monster and...

Oops. Sorry; that was the plotline for the last season of LOST.

I assume that the writers may have started out trying to figure out a new story for Odysseus (played gamely here by Arnold Vosloo), and realized that the most logical thing would be to have him encounter yet another dangerous female on an island, in imitation of the original's encounter with Circe and Calypso.  Odysseus and his men are a trifle suspicious of the nameless woman (identified in the caption-crawl as "Persephone" even before her name is given).  But they have nothing to go on until Athena, patron of heroes, sends a vision to Odysseus, informing him that the woman is the Queen of the Dead, exiled to the island because she wanted to take over the rule of the world from Zeus.  The writers don't trouble to explain how she's going to do this, any more than the LOST writers cared to explain what their smoky villain was going to do once he got loose.

Said writers, however, do explain what's keeping Persephone penned up on the island.  It's nothing less than the Golden Fleece, woved together with the coat of the Nemean Lion--

Oops again.  It's actually a doodad called "the Hellfire Cross," which sounds like something the writers pulled out of some 20th-century horror movie they'd written.  But this is what I mean by the filmmakers' inability to play by even the fuzzy rules set by the old peplum.  Homer can claim that this "cross" was constructed by Hephaestus and charged up by Zeus, but the problem remains: why would Greek gods be fiddling around with any sort of cross?  In similar fashion, all through this dialogue varies between portentous archaism and modern-sounding discourse, including, of all things, a paraphrase of Nietzsche's maxim that "what does not kill me makes me stronger."

Anyway, Athena isn't content to tell Odysseus to keep clear of Persephone; she also wants him to stab the goddess with the cross, because for some reason the gods need a mortal to do the dirty deed.  Persephone finds out soon enough that her pawns are getting ideas of their own, and she tries an interesting strategy: masquerading as Odysseus' long-unseen wife Penelope.  Though Odysseus sees through the charade he has sex with her anyway.  Following their intimacy, Persephone, not needing the average pregnancy-test, declares that she now has Odysseus' newest boy-child in her womb, and tries to use the fetus as a bargaining-chip.  This could have been an intersting moral problem even within the context of a fast-paced adventure, but the script drops the ball and concludes the film with the usual predictable face-off.

The most I can say for this film was that it was more fun to dis it than to watch it.

Posted by Gene Phillips at 10:39 AM
Email ThisBlogThis!Share to TwitterShare to FacebookShare to Pinterest
Labels: combative adventures, the marvelous