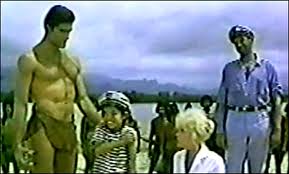 These two films comprise the last entries in Tarzan's long career as a serially-produced cinematic attraction.  After this, his appearances would become increasingly sporadic, and subject to interpretations as wildly apart as those of John Derek and the Disney Corporation.

Often, long-running serials die with a whimper rather than a bang.  RIVER and JUNGLE BOY are no exceptions.  Both are modest, reasonably watchable entertainments, but there's considerably less sociological myth-content than was typical of earlier films in the series, even in lesser works like TARZAN GOES TO INDIA.

RIVER is the last of Tarzan's globe-hopping episodes in the series, taking the ape-man to Brazil.  As with India, Brazil boasts a fascinating culture that might have made for considerable sociological tensions, but the script by Bob Barbash (veteran of mostly TV shows) simply slots in a generic devil-cult like that of the leopard-men in 1946's TARZAN AND THE LEOPARD WOMAN.  The cult's leader Barcuna is played by Afro-American Rafer Johnson, but since Brazil does have Black African elements in its culture, his presence isn't quite as eyebrow-raising as the apperance of Woody Strode in the Thailand of TARZAN'S THREE CHALLENGES.  Mike Henry's Tarzan has a reasonably good end battle with Barcuna.

Sadly, too much of the film is devoted to cute kid Pepe (Manuel Padilla Jr.) and his scalawag-mentor, raffish boat-captain Sam Bishop.  Kids had been evident in the Tarzan films for several years, but RIVER and JUNGLE BOY seem to bend over backwards to make the stories kid-friendly.  Pepe, outcast from his own Brazilian tribe for the crime of being an orphan, is taken in by kindly if devious Captain Bishop.  There may be an imperialistic metaphor in there somewhere, particularly when Pepe is called upon to demonstrate the efficacy of modern medicine to his tribe so that beneficent Doctor Phillips (Diana Millay) can do her job.  There's one decent joke here, though, in that Pepe, having learned the white man's ways very well, won't do the job for altruism, but requires some folding green from Captain Bishop for the service!

JUNGLE BOY is even thinner plotwise, as photojournalist Myrna (Alizia Gur) enlists Tarzan's help to look for yet another white foundling-boy lost in the African jungle.  It's modestly appropriate that at least the last of the serial Tarzan-tales returns him to his African home, even if, as was always the case, it's an Africa constructed out of pulp-stories.  Tarzan's search for the lost kid is complicated because the kid has gone missing in an area dominated by a tribe hostile to incursions.  On top of that, Tarzan shows up just as two royal brothers are contesting one another's right to the tribal throne.  Tarzan manages to get on the bad side of the villainous one, again played by Rafer Johnson, and he and the "jungle boy" end up helping the good brother, played by Rafer's brother Edward.  Tarzan has a somewhat better fight with the villain this time but in the film's best moment, the "good brother" is allowed to mete out justice.

Thus ends the long-running Tarzan series.  Neither of the last two films is especially good, but it must be admitted that they could have been much worse-- as evidenced by both John Derek AND the Disney Corporation!
Posted by Gene Phillips at 3:14 PM
Email ThisBlogThis!Share to TwitterShare to FacebookShare to Pinterest
Labels: combative adventures, outre outfits (u), superlative skills (u), the uncanny