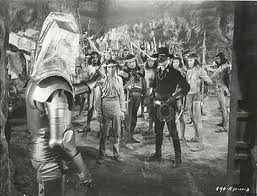 ZORRO'S FIGHTING LEGION is one of several serials on which John English and William Witney shared co-director credit.  It's a good solid adventure-romp with a colorful villain: Don Del Oro, seen above facing off against the titular hero.  It never quite scales the heights of great serial-adventure which the duo attained with ADVENTURES OF CAPTAIN MARVEL and THE DRUMS OF FU MANCHU, however.

Like a lot of serials, LEGION has a good setup and a lively finale; it's all the episodes in between which cause the serial to sag in the middle when viewed as a whole.  The best serials are those in which at least some of the "middle" episodes are bracing in their own right, allowing the audience to suspend their knowledge that (a) the hero's not going to die in the middle of the story, and (b) the hero's not likely (if ever) to die at the end either.  Of LEGION'S 12 episodes, only once did I find one of the hero's perils bracing: trapped in a burning room, with snipers outside ready to riddle him if he tries escape through the main door, Zorro manages to use his whip to swing through a high window to safety.

The aforementioned setup is a little more political than in most serials.  In the time of Juarez's Mexico, the fragile country seeks to shore up its reputation for fiscal soundness by shipping gold shipments from the San Mendolito mine to Mexico City.  When Yaqui Indians begin raiding the shipments, Zorro takes a vacation from his home in Old California and investigates.  He and his "legion" (a group of similarly-masked vigilantes) learn that the Indians are being commanded by a mysterious man in golden armor, representing himself as "Don Del Oro," the reborn "gold god" of the Yaquis.  One wonders why a Native American god doesn't have a Native American name, but rather a Spanish one.

Modern viewers, sympathetic to the treatment of Native Americans throughout history, may be tempted to sympathize with the Yaquis' desire to reclaim their ancestral lands from the descendants of Spanish invaders.  Naturally this is an aspect of real-world ethics that LEGION simply can't address.  The most one can project is that in theory the Juarez rule of Mexico, had it lasted, probably would have been better for the Yaquis than the overlordship of Don Del Oro, who is, as the climax unsurprisingly reveals, a white guy.

Reed Hadley makes a fine Zorro, with a number of above-average swordfight-scenes.  An interesting side-note is that female lead Sheila Darcy, though she doesn't get to do much of anything here, would play a version of the famed Dragon Lady in her next serial, TERRY AND THE PIRATES.
Posted by Gene Phillips at 12:01 PM
Email ThisBlogThis!Share to TwitterShare to FacebookShare to Pinterest
Labels: combative adventures, outre outfits (u), the uncanny