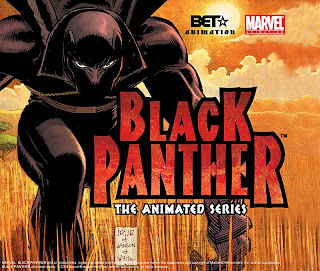 The DVD collection of the short-lived BLACK PANTHER teleseries-- produced in concert between Marvel Productions and the BET channel--  accurately adapts Reginald Hudlin's graphic novel (a collection of the first six issues of volume four of the BP feature).  It's watchable but not especially compelling.

Given that the animation takes the "motion comic" approach, the chief virtue of the visuals is that they mirror the strength of the pencilwork of comics-artist John Romita Jr.  Hudlin is credited with the adaptation of his comics-script, although he adds a few elements not present in the original GN, such as a guest appearance by the superheroine Storm (whom the Black Panther later married in Marvel comics-continuity).

The greatest strength of the Hudlin comic-turned-teleseries is its attempt, however imperfect, to center the fantastic cosmos of the heroic Panther and his wondrous African realm Wakanda within the sphere of real-world political concerns.  The original Black Panther backstory created by Stan Lee and Jack Kirby in the 1960s, while admirable on many levels, essentially rewrites innumerable Tarzan film-tales in which the ape-man repels invaders from his pristine African paradise.  Lee and Kirby's main innovation was to posit a black hero being every bit as heroic against invaders as Tarzan and his many jungle-kindred.

Hudlin, in part following the lead of other raconteurs  who followed in the footsteps of Lee and Kirby, re-imagines Wakanda as a realm apart from the dirty politics governing the rest of the world, including the borderline-corrupt United States of America.  At one point a Wakandan emissary deprecates most of the rest of the world for its lack of "spirituality," implicitly in comparison to Wakanda itself.  Hudlin never really defines that alleged spirituality, though: rather, Wakanda's main strength is its ability to repel the attacks of the modern mechanized world.  It's a badass version of Shangri-La.

Some reviewers complained that the series was too overburdened with references to Marvel continuity, particularly with a wide number of characters borrowed or modified from Marvel Universe comics.  I wouldn't mind seeing a Panther divorced of his Marvel origins but there's nothing intrinsically wrong with one intimately tied to the rest of Marvel (and there was no way Marvel was going to promote anything else, of course).  On occasion it's interesting to see certain figures, like Captain America, interpreted through a lens of political oppositionalism.

In any case, the plot's pretty straightforward: various Marvel villains-- the Juggernaut, Batroc, the Radioactive Man-- are organized to attack Wakanda by the Black Panther's foremost villain, Ulysses Klaw.  Klaw is given a more ideological slant here-- he's the descendant of a colonial family that helped found South Africa (which to say, an instant and unqualified villain in this ideology).  The Panther and his aides find various ways to stop the villains and even manage to send the United States packing from an ill-advised attempt at intervention.

It's all very ideologically fulfilling, but its chief fault is not the intrusion of Marvel characters.  Rather, in contrast to the many-faceted character of the Black Panther as presented by Lee, Kirby, and many other Marvel creators, Hudlin's Panther is just like his country: a tough badass-- and nothing more.  This Panther touches all the "right" bases-- he's respectful to his mother, he tells an awestruck young kid that he's just a man, not a god.  But it's weak tea next to the more nuanced portraits of Don McGregor and Christopher Priest.

Apart from some nice voice work-- though not by Stan Lee, who has an absolutely HORRIBLE bit part-- there's nothing here that isn't seen to better effect in the GN.


Posted by Gene Phillips at 4:12 PM
Email ThisBlogThis!Share to TwitterShare to FacebookShare to Pinterest
Labels: combative adventures, the marvelous