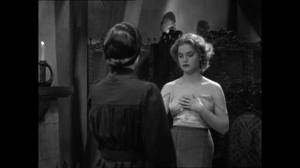 This straight-faced statement proves ironic, in that according to David Skal's THE MONSTER SHOW Universal Studios' original plan for the film would have brought Dracula back from the dead, to be essayed once more by Bela Lugosi.  However, the film censorship office had so many problems with the original script, Universal eventually decided to start over with a new script that allowed the master vampire to remain dead and emphasized instead his daughter's quest to escape her father's evil legacy.

The question as to how a 500-year old dead man sired a child is never addressed, but the film repeatedly positions the character-- who uses the possibly phony name of "Countess Marya Zaleska"-- as being the Count's genuine daughter, not just a metaphorical one created by Dracula.  Late in the film Van Helsing says:

"Dracula had many victims, Sir Basil, into whose veins he infused his own tainted blood, making them creatures like himself."

So far so good.  Since Zaleska (Gloria Holden) makes oblique mention of having had a mother as well, perhaps Dracula sired a daughter when he was still a living human, and later infused her with his "tainted blood."

However, toward the film's end, Van Helsing (Edward Van Sloan), the only person who places Dracula's age at "500 years," states that Zaleska died "one hundred years ago."  So it would seem that in this film's universe, being dead doesn't cut off a vampire's reproductive abilities.  As an alternative, one might also explain away the incongruity via some sort of Satanic magic, for though 1931's DRACULA doesn't evoke Stoker's notion of the vampire as a Satanic worshipper, Zaleska in DAUGHTER makes that association explicit.

The film picks up at the point where the 1931 film ended, as two London bobbies come across the crypt where Dracula has slain Renfield and the professor has staked the vampire in his coffin. Van Helsing and the bodies are both taken to Scotland Yard. The professor admits having killed the man he calls a vampire.  Commissioner Humphrey is not converted by Van Helsing's vampire tales, so Van Helsing calls in a former student, psychiatrist Jeffrey Garth (Otto Kruger), to help his legal defense, though both Humphrey and Garth protest that the professors needs a lawyer far more.  No one, including Van Helsing, considers the possibility of getting sympathetic statements from any of the people Van Helsing liberated from the vampire in the earlier picture.

To Van Helsing's good fortune, Countess Zaleska, having heard of her father's demise, arrives in London and disposes of the *corpus delicti.* Using her hypnotic talents and the help of her faithful non-vampire servant Sandor, the vampiress steals the body of her father from Scotland Yard.  In a deserted clearing Zaleska and Sandor burn Dracula's body, as Zaleska reads rites of exorcism consigning her father back to hell with his "dark, unholy master."  Later, in a rented art-studio Zaleska tells Sandor that she feels free of her father's evil influence at last.  Sandor, to whom Zaleska has promised vampiric immmortality at some future date, expresses extreme skepticism that she can just stop being a vampire.  Later, Sandor is proved right: Zaleska goes trolling in the London fog and mesmerizes a man, who later dies of blood-loss.

Garth, equally confused by his old mentor's fairy stories and by the connivances of his jealous secretary Janet (with whom he shares a combative-yet-loving relationship), meets Zaleska at a party.  He finds her fascinating, much to Janet's displeasure.  Zaleska for her part is intrigued when Garth claims that one can overcome any psychological dependence by using psychological resistance therapy.  Zaleska tests his theory, inviting a sweet young girl into her art-studio for the alleged purpose of sketching her. Zaleska hopes she can resist the blood-lust with the girl (perhaps *because* it's a female?). Zaleska fails the test, and yet another mysterious victim of blood-loss shows up at a London hospital.

Because the woman still lives but cannot seem to emerge from a paralyzed state, the hospital calls in Garth.  Garth fails to prevent the girl from passing away, but his sight of the vampire bites on her neck sways him to believe in his mentor's stories.

Zaleska, feeling that her father's influence pursues her from the grave, tries to persuade Garth to return with her to Transylvania.  He refuses.  Zaleska and Sandor kidnap Janet and  fly back to the Dracula Castle.  Garth, belatedly realizing his love for Janet, follows.  In the meantime Sandor has become irritated at Zaleska's pursuit of Garth and her refusal to make Sandor one of the undead.  Sandor tries to kill Garth with an arrow when he arrives, but misses.  Slightly later, Zaleska tells Garth that she will release Janet unharmed if he will consent to become one of the undead.  He consents in what some might consider a male version of the concluding sacrifice in NOSFERATU.  However, before Zaleska can give Garth his first vampiric kiss, Sandor shoots her dead with an arrow, effectively "staking" her (possibly the first time in fiction that an arrow was drafted for vampire-killing duties).  Sandor also tries to kill Garth but a cavalry arrives to shoot Sandor first.  Garth is reunited with Janet and Van Helsing makes his remark about Zaleska's previousdeath. This seems odd, for back in London he seemed to have no specific knowledge of her existence.

DAUGHTER, though a much moodier film than the original DRACULA, is distinguished by a thoughtful script with unusually strong moments of comedy relief, particularly the verbal sparring between Janet and Garth.  Lambert Hillyer's direction follows some of the pacing of the Browning film, but he shows himself able to move the action along at a good clip whenever necessary.  The vampiric lore borrowed from both Stoker and Browning is internally consistent, though it's interesting that whereas Stoker's very old vampires do collapse into dust when killed, here neither Dracula nor his daughter decompose.  Of course, had Dracula turned to dust, the writers would have had to find a different plot-direction altogether.

The dominant myth-function here is naturally psychological in nature, rebuking psychology's own positivistic premises and subscribing more to an Old World notion of inescapable sin and the wages of sin.  In some academic circles, DRACULA'S DAUGHTER has acquired the aura of a vintage lesbian film because of Zaleska's attacks on two women.  I don't question that the filmmakers probably played to such titillating images, but Zaleska as written has zero interest in Janet, and as I said earlier, her invitation to the other young woman is a test of her own will NOT to seduce and destroy the girl, which test Zaleska fails.  At the same time, her preoccupation with Garth doesn't seem like hot hetero passion, either.  She seems to incline toward him as a talisman that she feels will dispel her father's power, although he's entirely inadequate to suppress her vampiric nature.  It would probably be fair to say that the daughter of Dracula does conjure forth all polymorphous pleasures, but then, in keeping with the mores of the time, defers them as being linked to death and therefore fundamentally unpleasurable.

Posted by Gene Phillips at 2:23 PM
Email ThisBlogThis!Share to TwitterShare to FacebookShare to Pinterest
Labels: the marvelous