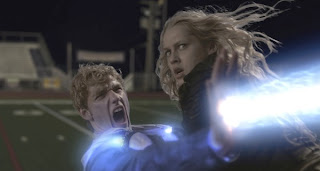 
I've not read the "Lorien Legacies" books that spawned this Dreamworks picture (first to be distributed by Disney's Touchstone-- cue "strange bedfellows" maxim), but I'm guessing from what I've read elsewhere that the film probably does the original justice.  FOUR is not a particularly inventive picture, following in the wake of many many teen-centered stories about young people trying to pass in ordinary societies despite possessing extraordinary powers

However, it does have one strength: it picks one simple story and follows it through with a minimum of complication.  This puts it ahead of other "power-teen" films in which the scenarios attempt to out-X the X-men in terms of dizzying continuities, as with (for example) 2008's JUMPER and 2009's PUSH.

The hero is the son of alien parents, both of whom have died, and his only parental figure is another alien who attempts to keep him safe, concealing him amid the humans of Earth, whom they both fortunately resemble.  Unfortunately, the young man has certain powers-- termed "legacies" to make them sound less like superhero attributes-- that are blossoming with his adolescence. At the picture's start, he blows his last Earth-cover-ID by letting other teens witness his abilities, so the guardian has to set his young charge up in another location.  The bulk of the story then follows young "John Smith" (the alien teen's choice for a new name) as he and guardian "Henri" try to keep low and avoid a hostile group of alien bounty hunters, the Mogadorians.

Naturally, the first thing John Smith does in his new locale is to butt heads with the local bullies and get cozy with a nosy Earth-girl-- one given to posting scandalous news on her website.  John also meets and befriends a young nerd named Sam who believes-- correctly, as it turns out-- that his father was kidnapped by aliens.  Sam gets the best line in the film: "My life is an episode of the X-Files."  John's carelessness brings down the wrath of the bounty hunters.  Henri dies but John meets another of his kind who in effect takes Henri's place: a young kick-ass female who calls herself "Number Six."  The teens trounce their attackers in some strong FX-scenes that, compared to other films in this subgenre, are relatively easy to follow.  John, expecting trouble to find him again, leaves his girlfriend and hits the road once more, this time with both Sam and Number Six in tow, thus leaving open the possibility of Sam locating his lost dad.

Given that this is all very well-traveled material, there might have been a justifiable temptation to camp it up.  Thankfully, the four principal actors all play it straight, and the script, while never provocative, supplies good bits of business for them.  Teresa Palmer as Number Six shows an intensity that's preferable to John Smith's maunderings.  It might have been a more inventive story had it been built around her, but the filmmakers did reasonably well with what they had.

Posted by Gene Phillips at 4:40 PM
Email ThisBlogThis!Share to TwitterShare to FacebookShare to Pinterest
Labels: combative adventures, the marvelous