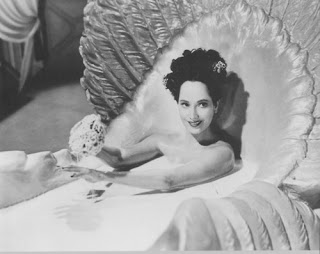 The only good lines from Universal's 1946 romantic drama NIGHT IN PARADISE (quoted from memory, but essentially accurate) appear when Princess Delarai (Merle Oberon) and Leonides, chancellor to the court of King Croesus, plot to destroy a mutual enemy by making it appear that he's tried to get it on with Delarai, which will bring down the wrath of Croesus on the enemy's head:

LEONIDES: Now, remember, when we break in, we must find you and Aesop irretrievably enmeshed!
DELARAI: (offended) "Irretrievably?"
LEONIDES: Well-- "enmeshed," anyway.

I couldn't find out anything about the source for PARASIDE, a novel by one  George Sidney Hellman, but I imagine that whatever Universal took from the novel was heavily worked over to reflect the studio's formulas for the  subgenre sometimes called "costume romance."  To my knowledge this is the only work in this subgenre set in the Greek world of Aesop and Croesus. PARADISE essentially rewrites this tale from Plutarch:

Plutarch  tells us that Aesop had come to Delphi on a diplomatic mission from King Croesus of Lydia, that he insulted the Delphians, was sentenced to death on a trumped-up charge of temple theft, and was thrown from a cliff-- Wikipedia entry for Aesop.


The film PARADISE somehow manages to enswathe this story-nugget in a bewildering "mesh" of storylines, none of which are ever all that compelling, though I give points to director Arthur Lubin (best known to horror-fans for 1943's PHANTOM OF THE OPERA) and the novel's two adapters for being a good deal more ambitious than the standard romance of this type.

As with many romances, the central conflict revolves around the attempt of a young man to win a young woman away from an older and undeserving tyrant.  Oberon's character Delarai of Persia is sent to become the bride of gold-loving sovereign Croesus (Thomas Gomez). As Lydia is a great power in the Aegean, Croesus extracts tribute from several nearby vassal states, but by doing so he sows the seeds of his own destruction.

The first sowing comes via ancient-looking, hunchbacked Aesop (Turhan Bey), who journeys to Lydia as the ambassador of the isle of Samos.  He makes the attempt to convince Croesus that he would prosper less by tribute than by forging a treaty of mutual respect and affirmation with the fiercely independent island.  Unsurprisingly, Croesus doesn't fancy the idea of getting LESS gold, and orders Aesop's execution.  To Aesop's fortune, Delarai is impressed with the aged storyteller's famous fables, and she persuades Croesus to let the ambassador live.  Aesop doesn't exactly give Delarai much credit, though, as he finds fault with her for planning to make a political marriage.  She naturally goes off in a royal huff.

The other sowing comes when Croesus sets up a scheme to bilk a fellow ruler, Atossa of Phrygia (Gale Sondergaard).  For some time Atossa has been trying to get in Croesus' good graces for the possibility of a union of royal houses: it's not clear whether she actually loves the Lydian King or whether she too just wants to marry her power to his. Croesus' statements to his chamberlain make clear that he has zero interest in the older woman.  To his misfortune, Atossa simultaneously finds out about both the swindle and the king's plans to marry a younger woman.  Since Atossa happens to be versed in the dark arts of Phyrgia, she lays plans to bewitch the greedy monarch.

Her first few sendings-- mostly mysterious voices-- soon have Croesus climbing the walls in fear.  He seeks the advice of Aesop, who professes a belief in pure reason and discounts stories of sorcery.  Briefly, Aesop's counsel banishes Atossa's sendings and Aesop stands high in Croesus' books.

However, old Aesop continues to rag on Delarai, and she gets pissed enough that she sets him up as mentioned above.  However, Aesop has a secret: he wears a false hunchback and old-age makeup to cover his genuine youthfulness, because "people only value wisdom when it comes from age."  However, it isn't pearls of wisdom he wants to swap with Delarai.  Atossa sends her own image to appear before skeptical Aesop, in order to mock him for his own desires, his real reason for despising the coming marriage.  She also tries to get Aesop to poison their mutual enemy Croesus, but though he's flabbergasted by the appearance of real magic, Aesop refuses the temptation to do evil.

Still, all the talk about his true motives fires him with the resolve to romance Delarai as his true self.  He doffs his old-age makeup, and keeps the rendezvous with Delaria not as Aesop, but as his young student "Jason of Tyre."  Delarai is quite taken with this younger version of her foe and soon they're whispering sweet nothings in the garden.  After more lovemaking she figures out his secret and helps him escape before Leonides bursts in to accuse Aesop.  In fact, Delarai reworks her plans to embarass the chancellor.

While Delarai continues to put off her royal suitor, Croesus hasn't forgotten the insolence of Samos in refusing him tribute.  He sends Aesop to the oracle of Delphi to determine whether or not he'll be successful if he makes war on Samos.  Apparently hoping to confuse the issue, Aesop uses his double identity again.  As Aesop he represents himself to the Delphi priests as Lydia's ambassador; as Jason, he poses as the ambassador of Samos.  As he expects, the priests give each ambassador the foretelling that they think he wants to hear, rather than making any real prophecy.

Before Jason/Aesop can expose the priests on his own terms, Delarai also seeks out the temple looking for him.  This forces Aesop to protect her from the angered priests and to condemn them roundly for their corruption.  As in the Plutarch tale, the whole town of Delphi turns out to drive both Aesop and Delarai over a high cliff to their dooms.  Croesus shows up at the last moment, trying to persuade Delarai to marry him anyway and forget Aesop.  She refuses, preferring to die with her beloved.  The Delphian spears force them off the cliff...

...but because the story needs a happy ending, Atossa for some unspecified reason saves the lovers from death in the sea below, and they go on to a happy wedded life with many children.  Atossa closes the story by telling the audience that Croesus went mad, caring about nothing but his gold for the rest of his life. It's rather surprising that Atossa would be satisfied with such a meager punishment for the king who scorned and swindled her, but perhaps the writers thought it unnecessary to kill off the tyrant, given that historically he was destined to die at the hand of Cyrus the Great (though probably no one in the audience would have known or cared had Croesus gone off the cliff next).

I rate the mythicity of this frothy romance as "fair" more for some of the tropes that suggest meaning rather than because they succeed in conveying it.  Initially, there's a bit of a "West vs. East" theme in the story, with "Samos" standing in for modern American independence and rationality, while "Lydia" represents the tyranny and self-indulgence of the Orient.  Though most of the romantic dialogue between Delarai and Aesop is forgettable-- as is the performance of Turhan Bey-- there are some interesting sparks between the two of them, in that they mingle the emotions of hate and fascination for one another before they truly acknowledge their desires.  Lastly, though Aesop in the old story doesn't escape his death by falling from a great height, there are a substantial number of archaic Greek characters who escape this kind of death through some god's blessing-- though, as *deus ex machina* go, real gods would have been preferable to rescue by a mortal sorceress who has no particular reason to grant the lovers life.  But all of these motifs are pretty much stillborn children-- the sort of motifs I term *inconsummate* in this ARCHETYPAL ARCHIVE essay.

Posted by Gene Phillips at 3:03 PM
Email ThisBlogThis!Share to TwitterShare to FacebookShare to Pinterest
Labels: the marvelous