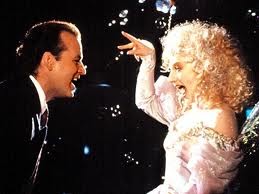 
Of all the strategies Charles Dickens employs in the original CHRISTMAS CAROL to show Ebenezer Scrooge's flaws, the most successful appears during the "Christmas Past" sequence.  During that sequence the reader sees that Scrooge, the miser who can't stand to spread his wealth around, rejoiced in his youth to receive just such bounties from his employer Fezziwigg.  The effect of the scene is to impress on both Scrooge and the readers that Scrooge has been among other things a hypocrite: enjoying largesse when it's applied to him but not willing to dispense same.

With that in mind, I find Richard Donner's SCROOGED to be guilty of the sin of hypocrisy.  Given that it's a Xmas film, not to mention the expectations aroused by any adaptation of CHRISTMAS CAROL, it's a given that it has to attempt to deliver the same moral message on how people need to care for one another, particularly the stand-in for Ebenezer, Frank Cross (Bill Murray). But given that at heart SCROOGED is a grossout comedy-- a genre which is all but based in extreme sadism, wherein he audience takes amusement at terrible things happening to people, whether they deserve them or not-- all of the film's attempts at pushing a message of lovingkindness seem more than a little strained.

Just as Ebenezer Scrooge's sin of Mammonism manifested through the way he ran his business, Frank Cross's very different sin-- that of promulgating "bread and circuses" to brainwash TV mass-audiences and make them buy more products-- manifests though his job as a TV executive.  Everything he does is calculated to screw around with beloved classics for the sake of ratings, including:

--A version of CAROL with Buddy Hackett as Scrooge and Mary Lou Retton as Tiny Tim,

--An action-opus in which Santa Claus teams up with "Lee Majors, the Six Million Dollar Man" in order to fight off a team of psycho terrorists,

--And an advertisement for the CAROL special designed to make the viewers literally afraid not to watch it, and which allegedly causes one old lady to drop dead in front of her TV.

Of course, even though the film has to tow the line with the notion that all of these are Very Bad Things, the truth is that the script takes particular joy in such spoofs and travesties, just as Bill Murray's Cross is fun to watch even when he's firing loyal employees on Christmas Eve or stealing a taxi from a burdened old woman.  It's not precisely that the audience likes seeing cruelty as such; rather, they like seeing their expectations for decent behavior turned upside-down.  Further, to some extent Cross' behavior is merely a more manic version of the "I'm all right Jack" attitude of his fellow TV execs: doddering Preston (Robert Mitchum), who thinks the station should skew its programming to include family pets' reactions, Cross's Marley-esque mentor Lew, who according to Cross paid for all his girlfriends, and smarmy up-and-comer Brice, who wants to edge Cross out of his job.

Despite my charge of thematic hypocrisy, SCROOGED does have a lot of funny bits, even if Murray mugs a little too often for my taste.  Just as readers of CHRISTMAS CAROL take pleasure in seeing the miser brought low, all the nasty acts of the absurdly tyrannical Cross (interesting name given the non-Santa aspect of the holiday) are set-ups for his slapstick humiliation by the Ghosts of Christmases Past, Present, and Future.

Of the three ghosts, Christmas Past (David Johansen) is the least interesting, presenting himself as a slobbish cab-driver who takes Cross to the various haunts of his youth, revealing explicitly that Cross became fascinated by television as a compensation-mechanism to cope with his irrational and unforgiving father (one need not have taken Psych 101 to realize that Cross has also imitated the behavior of this dubious father-figure.

However, the film outdoes itself with the Ghost of Christmas Present by essentially satirizing two saccharine images of children's entertainment: throwing together the image of sugar-plum fairies and the Billie Burke incarnation of Glinda the Good Witch from 1939's WIZARD OF OZ.  Carol Kane essays this role with incredible energy, and manages to steal the show from Murray in her scenes with him.

The conclusion is the biggest letdown, in which Murray, a reformed man, interrupts his own Xmas special to deliver a tortured appeal to audiences to stop watching television and reach out to one another.  Murray tries to give the speech his twisted comic appeal, but it just doesn't hold together when one realizes that in SCROOGED the real "gift that keeps on giving" is its freewheeling abuse of pretty much everything, whether deserving of mistreatment or not.

Even when I first saw the film, I thought the filmmakers undercut their own alleged message in one scene where Brice, the unctuous Uriah Heep-imitator, is victimized by having him blamed for the foulup of the Xmas special and then molested by a less than attractive female.  Since the filmmakers already diverged from the main theme of CHRISTMAS CAROL, I thought it might have been interesting if Brice, rather than just getting dumped on, had last been seen getting mobbed by the Three Ghosts, indicating that he too was going to get some "tough love."  But probably even that wouldn't have kept the film from being "scrooged over" by its own internal inconsistencies.
Posted by Gene Phillips at 3:19 PM
Email ThisBlogThis!Share to TwitterShare to FacebookShare to Pinterest
Labels: the marvelous