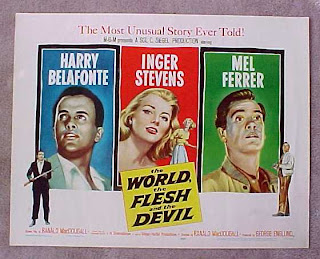 
"There's enough for three."-- Sarah Crandall, only apparently talking about the food in her picnic basket

THE WORLD, THE FLESH, AND THE DEVIL, one of cinema's earliest "after the Bomb" scenarios, may strike modern audiences as a trifle too obvious and mannered in its attempt to posit a better world arising from the ashes of the old.  The entry from THE OVERLOOK ENCYCLOPEDIA OF SCIENCE FICTION FILMS asserts, perhaps correctly, that the film's final image-- of the three stars resolving to make a new civilization together-- implies the end of "monogamy and racial purity."

However, the same entry also claims that Mel Ferrer's character Benson is a bigot, a charge from which Belafonte's character Ralph explicitly exempts him (in a conversation with the only other character, Inger Stevens' Sarah).  More, the Encyclopedia falsely states that Benson is aghast when he thinks Ralph and Sarah may be a couple.  In point of fact, when Benson first encounter with the only other local survivors of the Bomb, he's too ill to show any concern for who's shacking up with whom.  In the very next encounter, when Sarah's tending Benson at bedside, he says nothing about their relationship.  Instead, Sarah's the one who brings up her non-existent relationship with Ralph, and Benson is mildly surprised that they're NOT doing anything.

While it's possible that WORLD's filmmakers meant to take a shot at conventional monogamy, the narrative still validates the underlying ideal of true love.  Belafonte's Ralph survives the fall of the bomb by dint of being underearth at the time, he then makes his way to New York City, where an old TV-broadcast helpfully informs Ralph that the citizens all fled to the countryside. One must presume they died of radiation poisoning out there, thus sparing the film-audience the sight of a New York clotted with dead bodies.  The emptied city does remind one of the much later notion of the "neutron bomb," which theoretically would kill people but leave the buildings in their cities standing.

Just at the point Ralph begins to lose his grip to the crushing loneliness of being alone in the big city-- he starts talking to department-store dummies and naming them-- he encounters Sarah.  The two of them remain wary of each other at first, but soon they're taking pleasure in one another's company.  Only once does race come up: when Sarah thoughtlessly declares in conversation that she's "free, white and 21."  Ralph doesn't particularly like the implication that one has to be white to be free and says so, but the script goes no deeper into race relations than that.

Long before Benson shows up, it's evident that Ralph and Sarah have fallen in love, and she's more than a little impatient with his "chaste Negro" schtick.  Ralph never decisively explains his reticence, but it seems likely that he doesn't want her to love him because he's her only choice: hence, his desire for some proof that she really loves him.

Benson, by presenting a rival for Sarah's affections, ironically gives Ralph that validation.  Sarah naturally likes both men, but neither of them wants to share.  Both finally determine to fight a gun-duel in the empty streets of New York.  However, while Ralph's on the run he sees a United Nations inscription with the commandment to "make war no more."  Ralph surrenders to Benson, undermining the battle of the alpha males with the turning of a cheek.  Benson, being a decent guy at heart, can't kill a man who's not afraid and gives up on Sarah just as she shows up.  Interestingly, the final decision is hers: though it's plain that she loves Ralph, she invites Benson to come with them and build the new civilization-- though it's anyone's guess what status Benson will have in the new world.  Number Two Husband, perhaps?

There are several films of the period that endorse a Christian attitude of renunciation on the part of black Americans, and some of them are more than a little ideologically suspect.  Here, whatever the flaws of WORLD, it seems evident that all three characters, not just the black one, have to imitate Christ in terms of renouncing their old-world habits and preferences.  Such a myth probably seems naive to modern viewers, but in its quaint way, it does attain a deeper resonance than one generally finds in "after-the-Bomb" films.


Posted by Gene Phillips at 3:47 PM
Email ThisBlogThis!Share to TwitterShare to FacebookShare to Pinterest
Labels: the marvelous