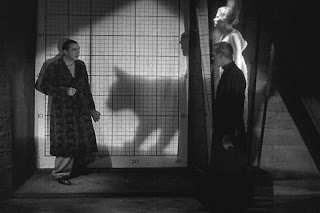 
"She had seen that the finger of Death was upon her bosom -- that, like the ephemeron, she had been made perfect in loveliness only to die..."-- Edgar Allan Poe, ELEANORA.

I doubt that any film of any genre in the 1930s more successfully captured the fascination of thanatophilia than Edgar G. Ulmer's THE BLACK CAT, only allegedly inspired by the Poe story of the same title.  The film starts and ends with the sight of Peter and Joan, a young honeymoon couple (David Manners, Jacqueline Wells) traveling on a train-- the first time moving into unsuspected danger, and later leaving the peril behind them.  But the two of them are nothing more than the viewpoint characters through which the audience looks into a world that only appears to be part of the normal breathing universe.  "We know too much of life," Hjalmar (Boris Karloff) tells Vitus (Bela Lugosi), but since Poelzing also rhetorically asks Vitus, "Are we not both the living dead," then it follows that they are both symbolically death-spirits looking at life from the outside in.

Being dead, however, doesn't cut either of them off from lusting after the youth and vigor of life.  Vitus Verdegast, eminent Hungarian psychiatrist, journeys to Austria to seek revenge on Hjalmar Poelzig, who betrayed Verdegast's military unit to the Russians during the First World War, causing the deaths of thousands and the confinement of Verdegast to an inhuman labor camp.  By chance Verdegast encounters the couple, and instantly notices in Joan a resemblance to his long-unseen-and-possibly-dead wife.  When their train lets them off at their destination, the three, along with Verdegast's servant, share a cab to the next city.  The cab is wrecked by a heavy rain, obliging Verdegast to take Peter and Joan to the only shelter nearby: the forbidding Bauhaus-inspired domicile of Poelzig, Austria's greatest architect.  (Even the fact that one character is Austrian and one Hungarian suggests the long standing conflict between the two countries.)

From then on, it becomes a waiting-game.  Poelzig knows that Verdegast has come to kill him, but he verbally manipulates the psychiatrist, tormenting Verdegast by revealing not only that he Poelzig married Verdegast's wife during the latter's untimely absence, but that the psychiatrist's daughter died as well.  What Poelzig doesn't tell his enemy is that the daughter Karen is alive and that Poelzig has married her, while keeping her unaware of her father's existence.

In addition, Poelzig has not one but two black cats roaming his fortress-like abode.  Whenever Verdegast-- who suffers from an irrational fear of cats-- sees one, he falls into a violent fit.  In one scene the doctor kills one of the felines-- which is surely the closest this story ever comes to any element of Poe's short "Black Cat" story. Eventually Poelzig further raises the stakes, as Verdegast learns that Poelzig plans to convene Satan-worshippers at his home for a Black Mass, in which Joan will be sacrificed.

There's a strong Oedipal element in the screenplay, which probably would have been stronger if it had pursued its original course: to have both the Karloff and Lugosi characters be outright villains.  The finished screenplay gives Verdegast greater moral compass, but it's evident in various scenes that he's as attracted to Joan as is Poelzig, who also sees the resemblance to the woman they both desired.  Poelzig, for his part, seems to conflate sex and death.  He expresses his desire for Joan by threatening to murder her on a sacrificial altar, and when Joan tells Karen that her father still lives, Karen doesn't even have time for a "How could you" before Poelzig kills the woman whom he claimed was "the core of my life."  Joan for her part is repulsed by both of these weird old men, but at one point, after she's been given drugs for an injury suffered in the car-crash, she briefly enters an odd hypnotic state in which she seems fascinated with them.  Academic studies would no doubt consider this a prime example of "the woman fascinated with the monster."

Phenomenally speaking, THE BLACK CAT is, like many Poe stories, a tale of the uncanny, in which none of the events are technically beyond the pale of reality, and yet all create a strong sense of "irreducible strangeness."  Since the story includes Satanists, the trope of "weird societies" needs no elaboration.  However, though I also tag BLACK CAT in terms of "perilous psychos," the madmen here aren't much like the standard horror-types, despite the script's copious references to insanity.  Like the villain of THE MOST DANGEROUS GAME, these two madmen are more like Sadean obsessives than garden-variety psychos.  As for the "bizarre crimes" trope, in comparison with other uncanny-films reviewed here, BLACK CAT has the most in common with 1967's BERSERK, in that the final vengeance of Verdegast upon Poelzig deals with extreme mutilation.


Posted by Gene Phillips at 2:46 PM
Email ThisBlogThis!Share to TwitterShare to FacebookShare to Pinterest
Labels: bizarre crimes and crimefighting (u), perilous psychos (u), the uncanny, weird families and societies (u)