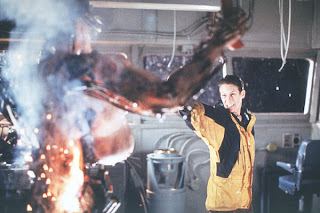 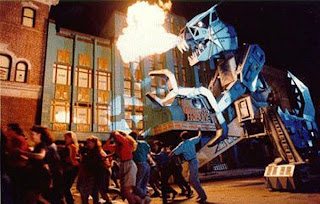 
This time out, by chance I've got two movies related only by their depiction of maliciously mauling metal menaces.

While many reviewers slammed 1999's VIRUS for its lack of originality, it has one great virtue.  If one grants the likelihood that the Sci-Fi/Syfy Channel is probably going to churn out SF-tinged disaster films by the boatload (like those reviewed here), VIRUS would be a good model as to how to do it well.

Of course, Syfy and its affiliated production companies are not ever likely to pour as much money and effort into any of their throwaway commerical-selling fodder.  But in principle, when you criticize a given producer for churning out dreck, you should always be able to point to a good example of what he's doing wrong.
In terms of characterization, the script for VIRUS (adapted from a Dark Horse comic book with which I'm not familiar) resembles any Syfy offering: characterization is minimal of all those facing the disaster except for two or three leading players.  However, even the lead players really don't get much more than a few interesting ticks.  In VIRUS the principal players are Donald Sutherland, as Captain Everton, who's basically the dumbass-in-charge who risks everyone's lives, while Jamie Lee Curtis is Foster, the spunky subordinate who takes over and makes all the right moves, even though most of the "redshirts" get killed anyway.

The premise is simple: thanks to an electrical surge aboard the Russian MIR space station, a form of electrical life comes into being.  It manifests aboard a Russian science-expedition ship at sea and slaughters most of the crew, except for a survivor who lives to tell the tale.

Enter the crew of the tugboat Sea Star.  They've just lost their cargo to a typhoon and are taking on water.  In addition their captain, who viewed the cargo as his last hope to end his debt, is about to commit suicide when the crew sights a "ghost ship," the almost-uninhabited Russian vessel.  They abandon their sinking tug and board the new ship.

The early scenes are probably the closest this horror-tale ever gets to straight drama: clearly Everton is greedy to salvage the vessel and may be willing to kill any survivors to clear his path.  But all of them have worse problems to deal with when the electrical being starts bringing to life killer cyborgs comprised of adapted metallic gizmos and dead bodies.  After various violent encounters Foster challenges the captain's competence, punches him out and takes command.  This drives Everton over the brink.  He establishes communication with the creature and offers himself up for cyborg-conversion.  Unfortunately he's dispatched rather quickly and the final confrontation is between Foster and her allies against more of the electrical creature's mechanical avatars.

Given that Jamie Lee later stated that the picture was crap, she's very good in this, giving a strong tough-girl performance that never seems beyond the bounds of possibility.  Sutherland is more uneven, but then so is his character.  But the A-level FX-work is the real star here.  As long as one doesn't expect any depth in terms of exploring the nature of an electrical life-form, VIRUS is a decent thriller.

STEEL JUSTICE is a different breed of mech-animal, a failed NBC pilot built around the idea of a future-cop with a "dinosaur partner."  One online reviewer theorized that (a) some TV-executive happened to attend a monster-truck rally starring the spectacular "Robosaurus," a mechanical tyrannosaurus that chomped up car-victims, and (b) the executive was immediately inspired to create a series using a mecha-dino with the exact same name (presumably licensed from the original creator).  It's almost impossible to imagine how this peculiar offering could have been turned into a regular series, though I suppose in theory it wouldn't be much different than all the Power Rangers concepts, which usually end with the heroes summoning a big robot to save them.

In the near future, listlessly ripped off from BLADE RUNNER with no great consistency, police lieutenant David Nash is hot to bust a group of weapons-dealers menacing his city.  He has a very personal motivation: a year prior a group of dealers bombed the car occupied by Nash's young son.  Now the depressed cop lives a haunted life, so that when he's not chasing weapons-makers he sits around morosely meditating on the toy he and his late son made together: a small robot dinosaur called "Robosaurus."

However, Nash is destined to receive instruction from a higher power.  Into his life comes a strange fellow, Jeremiah J. Jones, who claims to be a time-traveler.  He's two thousand years old and has spent his life looking for individuals who possess a unique "transforming" power.  He tries to convince Nash to "listen to his dreams" and embrace the power: Nash dumps Jones in the pokey.  But in a climactic battle with the weapons-dealers who killed Nash's son, Nash does tap into the power and transforms the toy Robosaurus into a giant robot dino that stomps all the bad guys to hell and back.

The script, directed and co-written by Christopher (SEVEN DAYS) Crowe, does make a sincere if pedestrian attempt to ground its unwieldy premise in dramatic structure.  The deceased son of Nash (also named David) conveys in one flashback line that he views Robosaurus as a protective force just like his dad.  This trope plays to the basic psychological idea that children project their need for strong protectors onto fantasy-figures like monsters or superheroes, but the STEEL script adds one complex touch.  Late in the picture, Jones admonishes Nash for seeking to take on the criminals in a suicidal attack.  Nash replies that he's willing to die because he's "tired of being helpless"-- which line shows a minor but interesting resonance with the son's line.  Nash's son compensated for his feelings of helplessness with a negative compensation, a protective fantasy-figure that doesn't exist.  Then his same-name father almost loses his life because of similar feelings, but turns them into a positive compensation, using the power of his dreams to summon a real power to help him achieve justice.

Contrary to some online writeups, there's no suggestion that the dead boy's spirit comes back in the form of Robosaurus.  There's one scene in which the toy dino appears to have moved around the apartment under its own power, which probably sparked in some viewers the idea of ghostly survival.  It's more likely that the writers meant to suggest that Nash's mind was subconsciously manipulating the toy, as a prelude to Bigger Things.