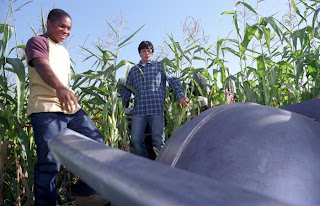 "Vortex," Season 2's opening, picks up following the "perfect storm" of soap-opera plotlines from Season 1's cliffhanger.  Clark tries and succeeds in rescuing Lana from a deadly twister without exposing his secret.  In doing so he still doesn't discover his power to fly, but this is the first time he seems conscious of the possibility.  He also succeeds in alienating Chloe, whom he leaves behind at the prom in order to go save Lana.  Lex, though tempted to let his father Lionel perish under a fallen ceiling-beam, does the right thing and saves Lionel's life, though Lionel's injury results in neural blindness, in part because Lex was a little slow with his rescue-efforts.  But most of "Vortex" concerns Jonathan Kent's desperate attempt to stop rogue reporter Nixon from exposing Clark's secret.

One aspect of that exposure is quickly neutralized: after Nixon accidentally brings the Kryptonian spaceship to life by bringing a "key fragment" into contact with said ship, the storm seizes the ship before it can do anything but float around a little.  The tempest's violence knocks loose the key-fragment and hurls the once-more-inert vessel out of the storyline, until it surfaces in two episodes later in "Duplicity."

Jonathan chases Nixon out of the Kent's cellar and into the storm-tossed countryside, but moments later-- in keeping with the many "Wizard of Oz" references sprinkled throughout the story-- a house falls on them.  Or, to be specific, it falls so as to trap them under the ground, so that no one knows what's become of them.  The forced propinquity of Jonathan and Nixon forces them to discuss their quarrel, but when Nixon, hungry for success, refuses to conceal the story for Clark's sake, Jonathan destroys Nixon's cellphone, determined that they will both die before he lets Nixon succeed.  Clark manages to unearth the duo, but he falls prey to the usual kryptonite mojo. Jonathan goes after Nixon again, and in their struggle Nixon tries to kill Jonathan.  Lex happens along in time to shoot Nixon dead, thus inadvertently protecting the Big Secret Lex himself covets.

The most interesting aspect of "Vortex" is the verbal battle between Jonathan and Nixon.  Although the reporter is clearly out for himself, he's prophecizes a "great destiny" for Clark, claims that "he belongs to the world," and scorns Jonathan for being a "small man" seeking to hold Clark down to the farm.  Though Nixon dies, the second season continues to emphasize tensions between Jonathan's desire to restrain/protect Clark and Clark's growing desire for independence.

"Heat" follows up Season 1's introduction of Clark's X-ray vision with the correlary power of heat vision, though as SMALLVILLE is built around teen angst, Clark's new power surfaces thanks to the stimulation of a hot new teacher.  However, Desiree Atkins has come to Smallville with the hidden agenda of marrying a millionaire, and in no time she's engaged to marry Lex.  Clark and Chloe soon learn that Desiree has a history of marrying rich men and using her meteor-freak powers to mesmerize other men to kill them, so that she inherits their wealth.  Desiree tries to use Clark in this manner, but though he's vulnerable to some meteor-freak powers, she can't work her magic on Super-Clark.  It's probably no coincidence (from the standpoint of the scripters, not within the story proper) that Desiree does succeed in taking control of Jonathan, trying to take advantage of the older Kent's emnity for the Luthors.  Clark manages to abort Lex's murder and Lex gives Desiree the boot.

"Duplicity" brings to a boil Clark's long-expressed desire to have a confidante.  This represents a change from the original SUPERBOY comics' conception of Pete Ross, for in the comics Pete was still Clark's best friend, but he only found out Superboy's secret ID by accident, and used that knowledge to render aid to Clark's Superboy missions without Clark ever learning that his secret had been broached. Here, Clark goes against parental wisdom by trusting Pete with his secret, which then remains the status quo as long as the Ross character stays with the series (until the end of the series' third season, when Pete Ross's character is written out).

The plot-device that alters the Clark-Pete relationship is Lex's pet scientist Doctor Hamilton.  Lex, somewhat less occupied with the secret of "aliens in Smallville" at this point, fires Hamilton for violent behavior and suggests that the scientist get treatment for his illness; the result of exposure to meteor rocks. Hamilton for his part seeks both the spaceship and the activating fragment, but instead of finding it himself he sets into motion a chain of events making it possible for Pete to stumble across the storm-tossed vessel.  Pete naturally asks his best friend for help in getting the heavy  UFO to his house.  Clark and his parents contemplate how they might get the ship back before anyone else finds it, but Hamilton gets to it first and steals it.  But he still can't get Lex's help in examining the ship, though he does inveigle blind Lionel into stopping by to give the ship a quick Braille-touch. Clark, hoping to save his imperilled friendship with Pete, reveals his true nature, but Pete is even more torqued after finding out how long his best friend lied to him.  Hamilton finally decides that Pete must know who holds the secret of the ship and kidnaps the young man.  Clark comes to Pete's rescue and Hamilton propitiously perishes in the battle.  Pete now learns the heavy responsibility of sharing the Big Secret, and the two high-schoolers mend their fences.

On a minor note,blind Lionel continues to challenge Lex despite the former's disability.  At one point Lex accuses Lionel of having returned to Smallville for the purpose of "Oedipal mano-a-mano."  Lionel corrects Lex by saying that in Oedipus it was the son, not the father, who was blinded.  But in Freudian doctrine blindness can connote any kind of injury resulting from the sexual competition of father and son, so Lex actually wins the point here.

"Red" articulates an interesting new angle on the comics' concept of "red kryptonite."  In the comic books this mutant version of the deadly element caused Kryptonians to undergo bizarre temporary transformations, but the teleseries reinvents red meteor-rock as a substance that causes Clark's suppressed "id" persona to come forth.  Even before exposure, Clark has again defied his father's conservatism by choosing to purchase an expensive class ring.  The ring happens to contain the red mineral, and in no time mild-mannered Clark is hitting on women (including Lana) and defying his parents.  Clark even has a minor altercation with Jonathan, resulting in bruised ribs for Jonathan.  Lex, oddly enough, is the only one not to perceive Clark's shift to the Dark Side, ostensibly because he's always suggested that Clark be more assertive (and hence more like Lex himself).  Fortunately, with the help of new helper Pete, the Kents figure out the source of the id-demons and de-ring Clark with a maneuver that would smack of Freudian castration were Clark not invulerable. Returned to normal, Clark manages to make excuses for his behavior, but from then on Lana becomes increasingly impatient with his "just friends" attitude.  By this time the original motivation for Clark's reluctance-- that he felt guilty when he learned his spaceship had indirectly caused the deaths of Lana's parents-- has started to drift away and in future makes only very sporadic appearances.
Posted by Gene Phillips at 9:45 AM
Email ThisBlogThis!Share to TwitterShare to FacebookShare to Pinterest
Labels: combative adventures, the marvelous