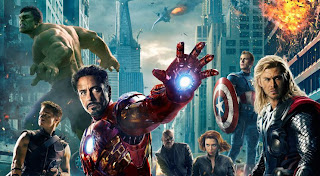 As I write this, THE AVENGERS has broken the current record for an opening box-office gross in the United States.  While this success is impressive for a comic-book superhero film, given that some critics thought the trend was burning out, it’s also vindicates Marvel Studios’ canny strategy: building up advance support for AVENGERS through advance-hype in IRON MAN 2, THOR, and CAPTAIN AMERICA.

Joss Whedon, who both directed and co-wrote AVENGERS, does a fine job of translating for modern audiences the appeal of early Marvel comics—hyperkinetic action, clever comic relief, strong characterization and hero-crossovers.  Whedon’s teleseries efforts, ANGEL and BUFFY THE VAMPIRE SLAYER, showed similar facility in all four departments, so he was surely the best choice to assemble the Avengers.

The plot is as simple as the original AVENGERS comic.  In that story, Thor’s villainous stepbrother Loki, wishing to destroy the Thunder God, launched a plot that involved using the Incredible Hulk as a pawn, but ended up involving Iron Man, the Ant-Man and the Wasp as well.  After Loki’s defeat, the five heroes banded together as the Avengers.  Here, following a storyline set up in the THOR film, Loki plots to open a cosmic gateway, allowing alien marauders to subjugate the Earth, the planet Thor loves best.  Loki’s plot runs afoul of not just Thor but also Iron Man, Captain America, Hawkeye, the Black Widow, and the Hulk (who, to be sure, only appears in the last third of the picture, after Bruce Banner finally fails to keep the green goliath under wraps).

In contrast to the mediocre fight-choreography seen in THOR and CAPTAIN AMERICA, THE AVENGERS goes all-out.  Since the alien invasion doesn’t take place until the film’s final third, Whedon keeps the plot-pot boiling just as Marvel’s creators did: by having the heroes fight amongst themselves-- Thor vs. Iron Man, Black Widow vs. Hawkeye, and— with an eye to decades of Marvel-fans’ arguments—Thor vs. the Hulk.  Whedon’s command of humor is no less strong, whether it’s evoking Marvel catch-phrases like “Hulk smash” or giving Tony Stark metrosexual references to shawarma.

Given the fast-paced narrative there aren’t many in-depth character moments, though a confrontational scene between Chris Hemsworth’s Thor and Tom Huddelstone’s Loki shows both actors to good effect.  One might complain that some of the hero’s interactions become a little too fractious a little too quickly— admittedly a characteristic of early Marvel comics as well.  But here the heroes’ quarrelsomeness, though rooted in their personalities, has been enhanced by Loki, which fact allows Whedon a certain leeway.

Thematically THE AVENGERS could have been stronger.  I suspect that Whedon patterned his screenplay not just on AVENGERS #1 but also on the animated Disney XD series, AVENGERS: EARTH’S MIGHTIEST HEROES.  In that teleseries, the supergroup arises partially in counter-response to the “black ops” of Nick Fury’s SHIELD agency.  For me this scenario concretizes the ethical basis of the superhero, making it an individual response against any kind of evil, including evils sanctioned by the government.  In the live-action films, Nick Fury midwives the group’s birth, and though there are a few canards tossed at the superspy’s questionable morality, those sociopolitical vagaries go out the window when the alien horde comes calling.
Posted by Gene Phillips at 1:47 PM
Email ThisBlogThis!Share to TwitterShare to FacebookShare to Pinterest
Labels: combative adventures, the marvelous