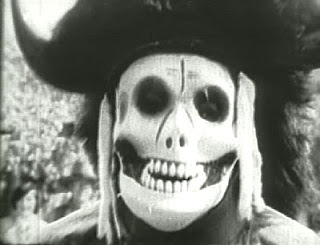 
The cowboy as light-hearted adventurer and the Civil War hero as existential punching-bag show the genre of the western at its most disparate.

RIDERS OF THE WHISTLING SKULL, fourth of the "Three Mesquiteers" B-movie series, pits the three modern-day cowpokes (in this case Ray Corrigan, Robert Livingstone, and Max Terhune) against the inhabitants of a "lost race" of devilish redskins.  The cowboys get wrapped up in helping a pretty young thing look for her father, lost while he was seeking the Lost City of Lukachuke.  They set out to investigate the mysterious mountain-formation known as "the Whistling Skull" (a big chunk of rock sculpted to look like a skull, which "whistles" when the wind blows through it).  The Mesquiteers thus fall afoul of a tribe of Indians who may or may not be the modern-day descendants of Lukachuke, but they've more than willing to send the white intruders to join the bones of the ancient dead.

The suggestion that the Indians may have lived undiscovered by civilization as a whole is enough to qualify this B-film for my category "exotic lands and customs," though the film never tells audiences anything much about the red men, except that they're hot to kill all cowboys.  There is, to be sure, a half-breed character who encourages the tribe to kill all outsiders, but he doesn't become much of a significant force in the plot either.  One online review praised its fast pace in that the action covered up all the plot-holes, and I'd tend to agree.  I'll also note that the weird effect of the Whistling Skull-- which director Mack Wright plays up for one eerie scene-- also qualifies for the "exotic lands," though this is the first time I've ever applied the trope to a feature of "the land" itself.

SHADOW OF CHIKARA is one of many titles enjoyed by this Civil War outing, written and directed for Howco by one Earl E. Wright, but it's probably the best title in emphasizing the dark nature of the proceedings.  Following the end of the Civil War, soldier "Wishbone" Cutter (Joe Don Baker) finds that his civilian life is in tatters, for his nasty wife is now sleeping with a Yankee. She forces Cutter to leave his own house.  Seeking riches in place of love, Cutter learns of a treasure of diamonds concealed in a certain mountain, and he joins up with two other ex-soldiers, "Teach" and "Half Moon," to help him find the diamonds.

For the first 20 minutes SHADOW seems like a commonplace story, but eerie music starts playing in the background as soon as the three adventurers pick up Drusilla (Sondra Locke), a young woman who's apparently been ravaged by Indians and left to die.  Cutter, somewhat less enamored of the feminine gender, wants nothing to do with Drusilla, but Teach insists that they bring her along on their journey.  Other strange things begin happening: unseen Indians shoot at the group with black arrows, and some bird, possibly an eagle, attacks one of the horses, leaving deep scars.

The group arrives at the mountain, whereupon Half Moon (who is half-Indian) suddenly realizes that this is a mountain reputedly haunted by demons.  Half Moon relates a Eden-like story of how Chikara, an eagle-spirit, once protected a certain tribe within the mountain, bringing them peace and plenty. A jealous shaman sought to kill Chikara, only to be killed, thus bringing about the exile of the entire tribe from Chikara's mountain hideaway.

Naturally neither Teach nor Cutter believe in such superstitions, particularly because they have more pressing problems: some cutthroats attack the fortune-hunters, intending to rob the adventurers and rape Drusilla.  The cutthroats are defeated, but not before the heroes learn that one of the thugs experienced an attack by a mysterious eagle.  As the hard-luck heroes make their way toward the mountain, Half Moon is killed, apparently by accident, while in Drusilla's presence.  Teach, Cutter and Drusilla manage to gain access to the mountain, but Drusilla uses her feminine wiles on both of them, leading to their destruction.

Wright's moody story never directly states that the eagle-god is real, or that Drusilla is either his creation or his priestess, but though the supernatural is only implied, I judge that on balance it has to be considered real rather than delusory.  I also judge this film an irony because it depicts a world in which the horrors of war and the horrors of a malign god seem to be one and the same: both forces that end up dooming the heroes beyond hope of rescue.
Posted by Gene Phillips at 3:35 PM
Email ThisBlogThis!Share to TwitterShare to FacebookShare to Pinterest
Labels: combative adventures, exotic lands and customs (u), the marvelous, the uncanny