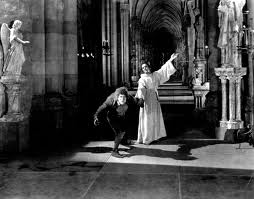 Many critics before me have observed that though certain films starring Lon Chaney Sr. had a huge influence on the American articulation of horror-films in the sound era, most Chaney roles tend toward suspense or melodrama rather than pure horror.  Chaney’s famed HUNCHBACK OF NOTRE DAME is something of a borderline case.  One can easily imagine the story writing out Quasimodo, or substituting some less grotesque character, at which point the story would become pure historical melodrama.


For that matter, it might be possible to render a version of Hugo’s story in which the hunchback’s tragic freakishness was given the same naturalistic treatment seen in other melodramas about teratological unfortunates, such as David Lynch’s ELEPHANT MAN.  To be sure, Hugo’s treatment of his deformed antihero is more naturalistic than one sees in many mainstream horror movies—not least Chaney’s next great exploration of physiognomic contortion, THE PHANTOM OF THE OPERA.  But even without the use of the tropes of horror-narratives, I’d still consider that Hugo lends an air of strangeness to Quasimodo, which qualifies both the original novel and Chaney’s treatment of it for my category of “the uncanny.”  I’d like to think that when I include the Hunchback in the pantheon of metaphenomenal monsters, I’m not being unduly influenced by how often Quasimodo appeared in monster-film magazines, but I can’t deny that could be an influence.


The main plot-thrust of the film follows that of the novel: the real struggle is less that of the hunchback Quasimodo and his tormentors than the large-scale conflicts between the court of French King Louis XI, the Catholic Church, and a quasi-proletariat that rises against Louis’ injustice, led by “Clopin, the King of Beggars” (Ernest Torrence, who played Professor Moriarty in the 1932 film SHERLOCK HOLMES).  The novel had two villains: Claude Frollo, the lustful archdeacon of Notre Dame, and his nasty brother Jehan.  The film gives Claude a saintly makeover and promotes Jehan to main villain, making him a Machiavellian type of plotter fomenting conflict for his own ends.  Jehan takes over Claude's role in manipulating Quasimodo, though the hunchback's reasons for obeying Jehan are obscure since Jehan isn't a father-figure to Quasimodo.  He also takes charge of lusting after the gypsy-girl Esmerelda and stabbing Phoebus, the young lord who pursues the girl.  Esmerelda is consistent as an innocent drawn into these complex plots, horrified by Quasimodo’s ugliness but capable of taking pity upon the tortured hunchback.  Esmerelda’s mother, who loses the girl as an infant to thieving gypsies, appears in this film-version, and makes such a brief appearance that I wondered why she was included.  Some adaptations don’t bother with the mother, and in truth she doesn’t really have much a role if one doesn’t plan to adapt the uncompromisingly tragic ending of the novel—which the 1923 HUNCHBACK does not do.


I won’t plan to address the plot in much detail.  It’s familiar to many readers from multiple adaptations, and I must confess that whenever Chaney Sr. wasn’t onscreen, I found the direction by Wallace Worsley stately but faintly boring.  Chaney’s performance is the centerpiece, and even aside from his peerless makeup, he throws himself into the role with great energy and athleticism.  Many of Hugo’s subtler sociological points are lost, but the film successfully puts across the image of Quasimodo as an accursed “Fool of God,” whose very existence places the existence of a loving Creator in doubt.


Posted by Gene Phillips at 2:31 PM
Email ThisBlogThis!Share to TwitterShare to FacebookShare to Pinterest
Labels: freakish flesh (u), the uncanny