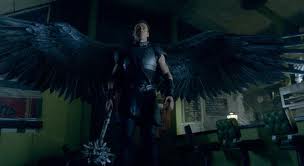 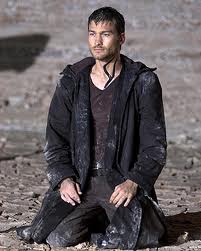 I’ve read more than a fair amount about mythology, but I confess that I don’t have a lot of detailed information about the Christian division sometimes called “angelology.”  I do know that for moderns the Biblical figures of Gabriel and Michael have become the most recognizable of the angelic host.  In fiction of a non-religious stripe, these two prominent servants of God are often opposed to one another in some way (as they were not in the Bible).  At times they’re figures, as in the two movies I review here, in the character of battling brothers in the Cain-and-Abel tradition.

LEGION, a horror-drama heavy with action-elements, bears a structural similarity to John Ford’s archetypal STAGECOACH, in that a disparate group of people are brought together at a secluded outpost and forced to fight for their lives against an invading horde.  The trope has often been re-imagined in terms of apocalyptic horror, with the defenders battling zombies or demons, but in LEGION the marauders are angels sent by God when the creator decides to wash his hands of his creation.  Freed of any compulsion to protect or succor mankind, LEGION’s angels act precisely like their demon kindred, both in Biblical and extra-Biblical sources, and start possessing humans—particularly the “weak-willed” in this storyline—to use against their enemies.

Those particular enemies come together at an isolated truck-stop restaurant out in the Mojave Desert.  Most of these characters are forgettable cannon-fodder for the action-scenes, with two exceptions: Charlie, a pregnant waitress, and Jeep, the teenaged son of the restaurant’s owner, who dotes on and protects Charlie even though she doesn’t reciprocate his feelings.  This selfless feeling, and Charlie’s unborn child, are the only things that can redeem humanity.

Shortly after the ensemble of disparate characters receive their first visit from an "angels-in-demon's-guise,” they meet Michael, who arrives with a trunkful of assault weapons and tells them that they’re the only hope of humanity.  Michael himself was appointed to slay Charlie’s offspring, whose birth in some unspecified way can prevent the apocalypse.  He rebelled precisely because he admired Jeep’s altruism, but apparently this rebellion cuts him off from any supernatural powers, so that he can only help the humans with the use of firearms.  After the desperate defenders repel several attacks from possessed humans, often with freaky demonic talents, God finally sends down his “Big Gun,” the angel Gabriel.

Although the characters mouth all the solemnities and incredulities one would expect of ordinary humans caught in a holy shooting war, the script doesn’t delve into Christian mythology in any meaningful way.  It’s an interesting if minor inversion to see angels acting like demons, and the film’s title almost certainly references the connotation that the name “Legion” has for a demon in Mark 5:9.  In that passage, Jesus exorcises a demon who seems to be a multifold entity, as it claims that ‘we are many.”  The angels in LEGION also act not like defined personalities, but like an infestation that can only manifest through victimizing human beings—though LEGION was probably less inspired by the Bible than by NIGHT OF THE LIVING DEAD.

The only angels who possess defined personalities are Gabriel and Michael, who symbolically figure as, respectively, the obedient and disobedient “sons” of God.  LEGION’s script probably borrows this conceit from Milton’s PARADISE LOST, in which the obedient angels agree to bow down before mankind while the disobedient ones refuse and are so consigned to hell.  But LEGION necessarily reverses the importance of being obedient, for at the eleventh hour Michael, after being slain by Gabriel, rises from death and prevents his sibling from ending the life of the “Christ-child-that-is-never-actually-called-a-Christ-child.”  Moreover, Michael’s defiance succeeds in getting God to change his mind, so that the Apocalypse is deferred once more.

Despite these myth-motifs, LEGION’s script isn’t really interested in the tonality or resonance of Christian myth.  Rather, the film “worships” the phenomenon of superior FX.  One such FX-scene shows the angel Gabriel spinning around to protect himself from gunfire with his wings.  On one hand, it’s an enjoyable scene just in terms of kinetic excitement, but it’s also amusing in that it puts me in mind of comic-book characters like Thor or Wonder Woman using similar absurd devices to ward off bullets.  I’d be the last to deride comic-book devices, but I must admit that this sort of thing doesn’t lend itself to the sort of “high seriousness” one might expect of a film dealing with the End of Days.

In contrast, GABRIEL—a film with a much smaller budget but which manages to keep from looking cheap—succeeds just where LEGION fails, in terms of conveying the emotional resonance of Christian myth.  Guilt, pride, transgressive lust, the loss of faith— all of these aspects of emotional conflict come to the fore in GABRIEL, and they carry with them much of the dramatic impact one finds in authentic Biblical stories, at least before they’re subjected to the bland and righteous popularizations, like this one.

GABRIEL has much of the hyper-noirish look of the 1998 Alex Proyas film DARK CITY, as well as making use of the trope of a world that is essentially a “copy” of an Earthlike-environment. But where DARK CITY accomplished this through science-fictional devices, GABRIEL recasts the metaphysical idea of “Purgatory”—the realm to which souls go when their fate’s not yet decided—and makes this otherworld the site of yet another apocalyptic battle of good and evil.

Purgatory, as noted above, looks like nothing but a modern urban “city of dreadful night,” and it’s inhabited by the souls  of the not-yet-judged, who think and act as if they were living humans.  But the souls of Purgatory have little to do in the story, which revolves around an ongoing contest between the forces of God’s angels—called “the Arcs”—and the forces of hell, “the Fallen”—another trope that strongly resembles Proyas' DARK CITY.  Angels and demons both take on human form when they enter Purgatory, but they can work only minor miracles (like spontaneous healing) and depend far more on human weapons, especially guns.  By common agreement Heaven and Hell send their agents—though never more than seven at any given time—to contend for possession of Purgatory.

The film begins as one of the noblest angels, Gabriel, enters the contest.  He defeats his first few adversaries but soon learns that the city is dominated by Sammael and his henchmen, whose favorite demonic vice seems to be prostitution (a good choice given how frequently the topic appears in Biblical texts).  Most of Gabriel’s potential allies have lost the will to fight, accepting the demons’ rule, or have gone into hiding, such as one of Heaven’s most notable angels, the redoubtable Michael.  Gabriel decides that he can only beat Sammael by whittling down his legion of supporters.


As I’m analyzing this film in terms of its mythic tropes, I can’t avoid disclosing the very noirish Big Reveal at the end: to wit, Gabnel finally learns that the real Sammael was killed some time back, and that Michael—who is rebellious in a bad way this time—has taken his place.  In contrast to bland Bible-stories, in which evil is no real threat to good, GABRIEL’s stifling visuals insist on the prevalence of corruptive forces in the world.  For those viewers attracted to plaster saints, such an admission would probably be blasphemous.  But in the world of GABRIEL, corruption is the yin to the yang of redemption.  It’s an adventurous take on the usually constipated world of Christian metaphysics, and deserves for that reason alone to be better known.