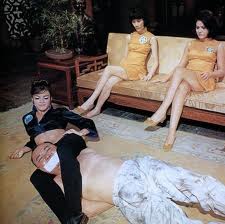 Poor hard-luck lady Sumuru!  Here's a lady who stumped for women's lib long before the Second Wave of Feminism, formed her own (implicitly lesbian) community, and had an arsenal of weird weapons like those of her predecessor Fu Manchu.  But whereas Fu Manchu's fame insured that at least some of his adventures in cinema proved admirable-- notably MASK OF FU MANCHU and DRUMS OF FU MANCHU-- this distaff evil mastermind had the misfortune that her first two adaptations came from famed schlock-producer Harry Alan Towers.

To be sure, I've not yet seen 2003's SUMURU, in which Towers again had a hand, and Towers did manage to collaborate on some moderately-entertaining Fu Manchu films in the 1960s (though he did some awful ones as well).  But both MILLION EYES OF SUMURU, directed by the British Lindsay Shonteff, and GIRL FROM RIO, directed by Spanish Jess Franco, show a marked lack of focus and creativity.

The earliest Fu Manchu films from Towers had strong production values, and, even if they looked a little cheap at times, the production teams managed to keep things moving well enough that the flaws could be overlooked. In contrast, both MILLION and RIO are full of painfully slow setups that draw attention to their status as setups-- tedious street scenes, awkward conversational interludes, and unimaginative fight-scenes.  Shonteff is a little better than Franco in this regard, as his routine mise-en-scene is often preferable to Franco's showy dependence on the fish-eye lens.  Additionally, while both films have dozens of beautiful women on display-- which may well have been the only thing Towers thought would sell the films-- the costumes on MILLION are cool, trippy '60s catsuits, while Franco's costumers were apparently rejected fashion designers wreaking their bizarre tastes upon the bored-looking models of RIO.  The only small advantage RIO has over MILLION is that the former sports a cool theme song by frequent Franco collaborator Daniel White. 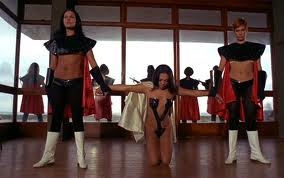 Both films have Bond-girl Shirley Eaton in the role of Sumuru, who devotes herself to the ideal of an all-female civilization (called "Femina" in RIO).  However, the scripts only dimly touch on the lesbian undertones of the ideal, not even managing to use it well in terms of simple exploitation. Eaton gives a forceful performance despite the dodgy lines, but her ideal is also compromised in that both films in that she can only fund her "island of women" by chiseling money out of rich men (and maybe the occasional woman).  Thus Sumuru (renamed "Sunanda" in some versions of RIO), despite her super-science, is reduced to the level of a brothel-madame.  You never saw Fu Manchu that hard up for cash.

Speaking of super-science, both of these films include very minor scientific weapons that seem even less relevant to the stories than the sort of death-ray one finds in various 1930s serials.  In MILLION Sumuru turns a man into a statue (of sorts) with a stone-making ray, while in RIO she tortures the hero with conveniently invisible rays.  These phenomena propel both films into the "marvelous" category, though they appear on screen so briefly that one wonders why the scripters included them.  Did they think that no one would accept the films as "superspy" fodder unless they had a couple of barely-seen super-weapons in them?

In both cases, Sumuru finds her plans undone by male agents. In MILLION it's George Nader (assisted by comedy relief everyman Frankie Avalon, who utters the memorably bad line, "Cut the knife"), while in RIO it's Richard Wyler.  There's not much to choose between Nader and Wyler, but Wyler's a little more macho and does slightly better stunts.  In addition, instead of a comic relief, Wyler gets the questionable assistance of a criminal played by a slumming George Sanders. Both films end with male armies invading Sumuru's sanctum and using automatic weapons to mow down dozens of lovely women, which seems to put a damper on the pleasures of the whole "island of women" fantasy.

Each film has just one strong scene.  In RIO, we have the goofy but memorable sight of George Sanders laughing and reading a POPEYE comic book while his thugs torture a young woman.  Shonteff does slightly better with his opening of MILLION, which at least explains the "million eyes" conceit in terms of Sumuru's countless female servitors. Shonteff shows the pitiless damsels watching cooly at scenes of destruction-- a bridge blowing up, a man being strangled by a woman's legs. This is the closest either film comes to imparting a mythic feel to Sumuru's entourage-- but it's a fleeting pleasure at best.
Posted by Gene Phillips at 5:03 PM
Email ThisBlogThis!Share to TwitterShare to FacebookShare to Pinterest
Labels: combative adventures, the marvelous