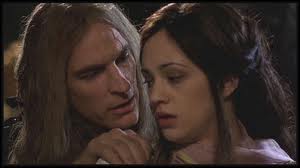 
I watched Dario Argento’s PHANTOM OF THE OPERA on home video ten years ago, but I must have blocked out the memories.  Before my recent re-screening, all I remembered was that, like most Argento films as well as Robert Englund’s 1989 take  on Gaston Leroux, this 1998 flick was replete with many gore murders.  Yet having re-screened the Englund film and found that it had some interesting content, I returned to Argento’s film with reasonable optimism.  I’m not a huge Argento fan, but even the weaker films tend to display Argento’s flair for creative death-scenes.

The film starts about twenty years before the Paris Opera House is built in the late 1800s.  A tearful couple, evidently unable to care for their infant child, places their baby in a basket and lowers it into the sewer.  Like Moses’ famed craft the basket floats down a subterranean river until a bunch of rats spot it.  They jump into the water and push the basket to shore, having apparently decided to raise the child as one of their own.

This is the first clue that Argento’s PHANTOM is going to be so far from the source-material as to make the 1983 Markowitz telefilm look like a model of fidelity.  I get the feeling that Argento skimmed the book, came across the short section in which a ratcatcher drives rats before him, and had the inspiration that the enmity between the rats and the ratcatcher was the most interesting part of the story.


In the name of fantasy, I can buy a lot of animals-raising-humans scenarios.  Wolves, apes, birds, lions—all grist for the mill.  But rats—or any animal too intrinsically small to suckle a human child—could only work as elements in a comedy.  And given the reputation of rats as filthy disease-carriers, that comedy would have to be of the blackly ironic variety.  I can imagine a director with a manic sense of humor—Ken Russell, perhaps—making such an absurdity work within an absurd world.  But Argento, for some bizarre reason, plays it straight.


Twenty years later following his adoption, the Phantom—he has no other name—is skulking beneath the Paris Opera House.  He’s established something of a legend, sustained by the opera’s lower-class employees. He doesn’t seem to be doing anything in particular—certainly not composing any operas.  He’ll kill anyone who trespasses on his underworld domain—he speaks the above line about being a rat to one such trespasser before killing him-- and he has a long-standing feud with the opera’s ratcatcher, a bumptious clod who boasts of all the rat-tails he’s collected over the years.


Despite having lived with rats all his life, this Phantom has no deformities, not even so much as a bad skin condition.  He’s also flawlessly urbane.  Shortly after he hears Christine (Asia Argento) sing for the first time, he meets her in a hallway.  She speaks to him first, convinced that she heard him speak to her first.  Possibly Argento meant to suggest a psychic link between them, though there’s no evidence of it in other scenes.  He praises her ability but at no time suggests that she become his musical pupil.  Though he doesn’t seek to tutor Christine, he does follow the usual procedure of tormenting Christine’s chief competitor, the diva Carlotta—played for very broad comedy, though the 1990 telefilm did the same thing better. Christine becomes more intrigued with the handsome stranger than with her current suitor, Raoul de Chagny. Once more Raoul becomes simply a young nobleman on the make, but Christine prefers to regard him as a “brother.”  Curiously, in addition to the usual figures from the novel—the harried managers, the conceited but unworthy diva—Argento includes Raoul’s usually-omitted brother in the cast, though under a different name.  Argento uses the brother just as the 1925 film did, as someone with whom Raoul can exchange a few meager lines.


This Phantom seems more like Tarzan than the Leroux character.  This Phantom bonds with rats like Tarzan does with apes, though the former prodigy never expressly commands the rodents to do things for him. The Phantom’s extremely strong, for he tosses one man like a rag doll and shrugs off gunshot-wounds during a fight-scene.  Whereas other Phantoms fulfill the “outré outfits skills and devices” trope in terms of the costumes they wear or the weapons they utilize, this seems to be the only one who possesses an uncanny physical ability.  I've included the trope "perilous psychos" because the Phantom is deranged by his upbringing, though he's not the sort of mastermind who performs the "bizarre crimes" of other versions, nor does he sport any "freakish flesh."

As there’s no teacher-student relationship between Christine and the Phantom, this seems to be the first film where the Phantom is literally her “demon lover.”  She answers her summons to meet him in his lair—atypically, she makes the boat-journey into his doleful domain alone. Down in his lair the Phantom, though no composer, has the requisite pipe-organ and the two of them have the standard singer-pianist duet.  But since there’s no unmasking scene to show Christine that he’s not a fit lover, she lets passion overwhelm her. For once, the Phantom actually gets some.

Most Christines seem blissfully unaware of their Phantoms’ murderous reputations. Even with that in mind, though, Asia Argento’s version seems remarkably dense.  After having sex with a man who lives with rats in a dank underworld, she’s shocked that he’s something less than a gentleman.  He wants her to stay in his lair, and when she refuses, he simply takes the boat and leaves her stranded.  Fortunately, Raoul finds way into the lair and helps her escape.  Upon seeing him, Christine displays an unappealing fickleness, claiming that she’s always loved the nobleman despite having blown him off earlier.  Later, after Carlotta’s been removed as lead performer and Christine takes over, the Phantom storms the stage in mid-performance to abduct her.  Raoul, several policemen, and the comically overblown ratcatcher give chase.  In the ensuing struggle, although mighty “Phantom of the Rats” manages to kill his brethren’s nemesis, police bullets kill the vermin-loving villain as well.  Yet even as she flees his presence—with Raoul steering her away in the rowboat—Christine weeps and wails at being parted from her demon lover.  After that, viewers probably shouldn’t entertain any illusions of wedded bliss for Christine and Raoul.

Asia Argento gives the audience a sexed-up Christine but she’s also petulant, changeable and superficial, while Raoul is so overheated he seems ludicrous. In addition, he’s given makeup and costumes that make him seem callow and unattractive. Sands plays his seductive role with stoical seriousness, but since no one could have given tragic dimension to a man reared by rats, it’s understandable that he never generates much intensity.  Almost the entire “Phantom of the Opera” plot has been shoved into the background to make room for Argento’s signature death-scenes.  However, none of these prove memorable. And when Dario Argento makes a movie in which even the murderous set-pieces are as dull as dirt, you’ve got past the idea of artistic visions spinning off source-material in new directions.  You’ve just got one helluva bad movie.
Posted by Gene Phillips at 12:21 PM
Email ThisBlogThis!Share to TwitterShare to FacebookShare to Pinterest
Labels: outre outfits (u), perilous psychos (u), superlative skills (u), the uncanny