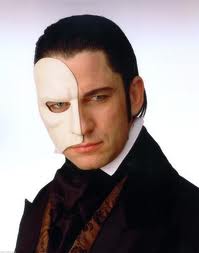 I’ve seen none of the stagings of the famed Andrew Lloyd Webber musical, so I won’t dwell on what differences the movie— whose script is credited to Webber and director Joel Schumacher—may have from the stage-play.  As with other reviews in this series, my concern is only with the film’s indebtedness to the original book and its other cinematic adaptations.


Although the Dwight Little version seems the first movie to place the Phantom-tale within a framing-device, Schumacher’s film uses the device for a more sentimental effect, opening as Raoul de Chagny, now a very old man, visits the dessicated ruins of the Paris Opera House for an auction.  Implicitly Old Raoul “remembers” the bulk of the film, though as with most other movies of this type, he’s not confined to remembering only the things he personally saw.  In contrast to most usages of the frame concept, the film cuts back to Old Raoul a couple of times before the concluding frame-sequence.


This version keeps many elements from the book, naturally re-arranged and even expanded.  As in the book two new managers are taking over the 19th-century Paris Opera House from the old manager, and as in the book they prove less than enthusiastic about learning that they have to deal with the opera’s resident ghost.   Christine is a chorus girl along with her friend Meg, daughter of opera-functionary Mademoiselle Giry, who here as in the book acts as an intermediary between the Phantom and the opera’s managers.  Carlotta is on hand for the changing of the guard, but when she sings for the company, a huge curtain falls and almost hits her—one of many near-fatal accidents brought about by the Phantom.


When Carlotta departs in a huff, Christine gets her big chance, for Mme. Giry tells the managers that Christine can sing Carlotta’s part.  Faced with an impromptu audition, Christine impresses the company and gets the role.  In addition, she tells Meg of having recognized her childhood sweetheart Raoul in the party, though he hasn’t yet recognized her. Strangely, though Raoul doesn’t recognize her when she auditions, he does a little later, when she’s performing on stage.


Christine’s great talents are the result of her secret teacher, the “Angel of Music” whom she’s heard since her father passed away during Christine’s childhood.  This is a minor deviation from the book, where Christine doesn’t hear the voice of the “Angel” until she’s somewhat older, attending a musical conservatory.  Also in contrast to the book, where only the readers are encouraged to associate the mysterious teacher with Christine’s dead father, this Christine strongly entertains the idea that her tutor may be the literal spirit of her father.


After her successful performance, the Phantom lures her down to his subterranean world, rather earlier than he does in most movie-versions.  The 1925 film’s imagery of Christine’s supernatural conveyance—first by horse, then by boat—is recapitulated in the film’s best musical scene.  Christine seems rapt by the entire experience, though one presumes that, since she’s considering that this bizarre masked man may be her father’s spirit, her emotion hasn’t shifted into the domain of eros as yet.


There follows a duet between them as he plays his piano, and then, an incomplete unmasking-scene, in that she yanks off the Phantom’s mask and sees his face, but the audience does not.  He rages at her feminine curiosity before he transports her back to the real world, giving her a ring emblematic of their bond and telling her to stay away from Raoul. Seeing his deformed face apparently doesn’t dispel in Christine that the Phantom’s the spectre of her father, for she still seems convinced of the idea late into the picture.


The diva Carlotta attempts to regain her position at the opera, but as in the book the Phantom sabotages her performance so that she croaks like a toad.  Unfortunately for his courtship of Christine, the Phantom goes further than this.  Because a stagehand has mocked him by talking of the Phantom’s “noseless” face and his skill with a noose, the Phantom hangs the man right on stage during a performance, echoing a similar scene in the 1962 Hammer adaptation.


For once, a version of Christine seems duly freaked-out by the notion that her teacher (and father?) may be a murderer: even Leroux’s version seemed blissfully blind to the hanging-incident.  She seeks the company of Raoul, and their old passions re-ignite.


Shortly afterward comes the scene of the Bal Masque.  In some versions of the story, this takes place after the Phantom has told Christine that she’s engaged to him, and warns her not to see anyone else.  Naturally this Phantom, though he never explicitly claims to be her father, can’t very well claim that the two of them are engaged.  Nevertheless the Phantom becomes jealous seeing Raoul with his prized pupil.  Whereas the Phantom usually dons the costume of the Red Death and passes amid the celebrants without much interaction, this time the Phantom—who deems himself the true owner of the opera—addresses the entire assemblage, telling them that they will soon perform his composition, “Don Juan Triumphant.”  Then he uses his knowledge of stage-magic to disappear back to his private underworld, leaving Raoul confounded by a hall of mirrors.


At this point Mme. Giry confides in the tormented Raoul, revealing her part in the secret origin of the Phantom.  In the book, Eric is abandoned by both parents and ends up in a traveling circus that tours throughout Europe and Asia, where Eric finally finds an outlet for his devious genius with the Persian royalty—thus paving the way for his return to Paris.  Here, Giry as a young girl sees the Phantom pass through Paris in a carnival freakshow.  She witnesses how he kills one of his nasty keepers via strangulation, and helps the deformed boy conceal himself beneath the opera-house.  Thus this Giry becomes far more of a direct benefactor, rather than a convenient go-between.  One might expect that she might have taken on a parental role to the Phantom, as the character of Carriere does in the 1990 telefilm.  But though she apparently facilitates the Phantom’s rise to power, there seems to be no emotional connection between the two of them in the film, any more than in the book.


Christine, feeling agitated by the looming threat of the Phantom’s attentions, seeks out the local cemetery, still half-convinced that he’s her father and that she can appeal to him somehow.  The Phantom apparently follows her there, but so does Raoul.  Thanks to Mme. Giry’s backstory, Raoul can at last tell Christine that the Phantom is no relation to her. The two men duel with swords.  Raoul wins the bout but spares the Phantom at Christine’s insistence.  The Phantom escapes once more.

At last Raoul and the opera’s managers convince Christine to be a Judas goat, giving a performance of FAUST designed to lure the Phantom into the hands of the police.  He comes out and the two of them sing another duet before the audience and the waiting police, during which Christine possibly begins to believe in their “passion play” for the first time.  Yet she unmasks him onstage, revealing his ugliness to the audience in a crueler manner than any Christine before this one.  In retaliation, the Phantom causes the great chandelier to fall upon the audience, and once more spirits Christine to his lair.

A note on the Phantom’s “ugliness”: while the stage-version made the Phantom suitably hideous, the Schumacher film confines itself to giving actor Gerard Butler a little putty-like deformity that hardly seems worthy of all the fuss.  One might presume that the minimal monster-makeup insured that some viewers could still entertain the illusion of a comely Phantom.


Raoul follows the Phantom, but this time, the Phantom captures him.  As in the book, the Phantom bargains with Christine, promising to spare Raoul’s life if Christine marries the Phantom.  She doesn’t consent to the bargain, but she gives him a kiss that essentially redeems him, so that the Phantom frees the young lovers and disappears.  Christine’s love for Raoul is undiminished, but she does show some divided feelings for her erstwhile demon lover.

The picture ends with the final frame, as Old Raoul visits the gravesite of his late wife Christine, only to find that some other visitor has left a single rose upon the grave—implying that the Phantom’s love, no matter how frustrated, has endured.

As a romance, the Schumacher version is one of the best, with all three principal actors giving vivid performances.  Aside from the “Angel of Music” set-piece I praised above, none of the musical numbers particularly grabbed me, but the quality of their performance is never in doubt.  The film’s greatest problem is the underwhelming nature of the Phantom’s makeup.  It seems pretty easy for Christine to sing that the Phantom’s face “holds no horror for me,” when it can’t possibly inspire horror in the audience-members.
Posted by Gene Phillips at 12:41 PM
Email ThisBlogThis!Share to TwitterShare to FacebookShare to Pinterest
Labels: bizarre crimes (u), enthralling hypnotism and illusionism (u), freakish flesh (u), outre outfits (u), the uncanny