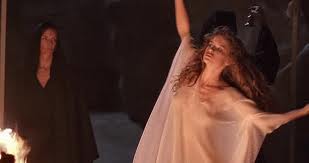 SPELLBINDER, a minor supernatural horror drama, comes off like "WICKER MAN for Dummies," with a small side-dish of Tom Tryon's DARK SECRET OF HARVEST HOME.  It's a fairly predictable opus, whose most interesting aspect is the prevalence of female power oriented toward the destruction of the male gender.  Interestingly, about two years before SPELLBINDER director Janet Green helmed THE LADIES CLUB, which dealt with an all-female vigilante group that went around castrating rapists.

Jeff is a young lawyer who's just thrown over his last girlfriend because she wasn't intellectually stimulating.  He comes to the rescue of the beauteous Miranda (Kelly Preston) from an abusive boyfriend. He falls in love with her combination of hotness and intellectual hauteur, but she has worse problems in that she's being stalked by a Satanic cult run by her mother. Or-- is she????

The script, one of the few film efforts of TV-show producer Tracy (SLIDERS) Torme, is predictable and largely artless, except for two scenes.  One is a very strange scene in which Miranda's Satanic mother (played by Audra Lindley of THREE'S COMPANY) comes to Jeff's office in order to verbally harass him, and makes the peculiar claim that she's unearthed his mother's bones for some ritualistic revenge (though nothing comes of this).  Later, the film has one spooky scene:: Jeff and Miranda are trapped in a house by a dozen Satanists, who begin pushing in on a large picture-window-- which seems to *bend* in a supernatural way rather than simply breaking apart.

As I've suggested from the mention of WICKER MAN, Jeff's not going to prosper from his championing of the fair sex.  But apart from the two scenes mentioned, SPELLBINDER is only worth watching for Kelly Preston's Playboy-model looks.
Posted by Gene Phillips at 5:08 PM
Email ThisBlogThis!Share to TwitterShare to FacebookShare to Pinterest
Labels: the marvelous