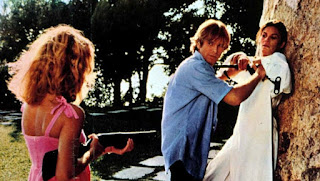 
The only reason I rented (and am reviewing) Franco Prosperi's LAST HOUSE ON THE BEACH is because it's so clearly indebted to Wes Craven's LAST HOUSE ON THE LEFT, which usually makes horror-reference books due to the intensity of its violence (subsumed by my "bizarre crimes" trope).  However, whereas Craven injects enough grotesquerie into his scenario to qualify it as a horror-film, BEACH is simply a naturalistic thriller, and not one of any particular merit.  Compared to cruder thrillers it generally looks good from a cinematographic stance.  Most of the cast-members were amateur actors, with the exception of experienced thesps Florinda Bolkan and Ray Lovelock, who naturally get the meatiest roles.

A trio of brutal thieves complete a bank robbery and head for the country to hide from the cops.  They chance to find a villa inhabited by seven women (the film's shooting title was "La Settima Donna," the "seventh woman.") One of the seven in the villa is a domestic whom the robbers kill almost immediately.  This leaves the hoods with six comely female prisoners: five of whom are students under the charge of Bolkan, a nun wearing civilian clothes.  Shake them all together and you get your usual stew of rapine and revenge.  Bolkan delivers the strongest performance, maintaining a constant reserve that's in keeping with both her calling and her immediate situation.

Prosperi keeps the sex and violence level comparatively low compared to other thrillers in this vein, though to be sure he isn't responsible for the script.  I've seen very little of his other work, but his 1960s peplum HERCULES IN THE HAUNTED WORLD (which he both scripted and directed) is one of the more well-regarded of its type.

Anyone who saw my somewhat positive review of MOUNTAINTOP MOTEL MASSACRE might well wonder how crappy a movie has to get before I stop analyzing it and really bag on it.  I did dismiss SCI-FIGHTERS are "ninety minutes of dullness," but if called upon to rain hate upon a film of the slasher variety, I'd be happy to jump with both feet on HAPPY HELL NIGHT.

Slashers take a lot of flack for usually employing very simple character-types, many of whom are simply set up as targets for some psycho-killer.  Nevertheless, there's a minor art to doing this and still making the stereotypical characters fairly appealing in some way.  NIGHT's stereotypic characters are probably no flatter than many of those in SCREAM, which would resuscitate the subgenre four years later.  But the scripters-- director Brian Owens and two others, none of whom went on to do much else in film-- bring no charm to any of the characters.  Originally titled FRAT FRIGHT, it concerns a bunch of stupid collegians trying to outdo one another in terms of fraternity pranks.  One of them conceives the idea of sending a pledge-- the younger, screwup brother of a fraternity member (Sam Rockwell)-- to the local asylum, where he must snap a photo of a prisoner who committed murder many years ago but hasn't spoken or interacted with his captors in all that time.  This leads to a chain reaction, revealing that all those years ago, the father of both brothers (Darren McGavin) feathered his nest with a Satanic contract.  For some reason tampering with the prisoner-- actually a demonically-possessed ex-priest-- makes it possible for him to go on a killing spree once more.  He proceeds to stalk about murdering dumb teens and occasionally older victims until he's duly exorcised-- OR IS HE?

Rockwell and McGavin's characters are so thinly written that neither actor can do much of anything with the unrewarding roles.  There's a brief suggestion of a fraternal conflict between Rockwell and his brother, but it comes to absolutely nothing.  The skin content is small and the gore is generally boring, made even more tedious when the demon-priest spouts witless witticisms that amount to nothing more than "No (fill in the blank.")  The worst of these is when he kills a person watching an MTV-clone called "STV," and the none-too-funny fiend says, "No STV."  It's one thing to rip off scenarios from HALLOWEEN and NIGHTMARE ON ELM STREET-- some would say those kind of homages are almost expected. But riffing on MTV in 1992 was the work of a very desperate and unskilled author.

The only scene that was a little interesting involves a Catholic priest praying in his church before a statue of Christ on the cross.  In a dimestore imitation of a Freddy-killing, the statue comes alive and implicitly kills the priest.  FWIW, even though this faux resurrection is accomplished on the cheap, with an actor covered in white paint rather than via CGI, it's pretty good makeup.  However, the effectiveness of the supernatural scene is reduced in that the living statue isn't seen to kill his victim-- and further, it's the only example of the demon-priest wreaking this sort of magical Kruger-effect.
Posted by Gene Phillips at 3:39 PM
Email ThisBlogThis!Share to TwitterShare to FacebookShare to Pinterest
Labels: bizarre crimes and crimefighting (n), the marvelous, the naturalistic