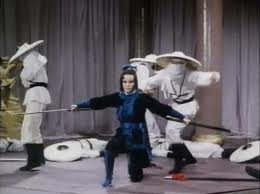 This period kung-fu film, whose translated title seems to mean precisely nothing, is sometimes titled WOLF DEVIL WOMAN 2.  The events of the story have nothing to do with the 1982 film WOLF DEVIL WOMAN, but it looks like ESCORT uses many of the same sets and costumes of the earlier film, in addition to its female star Chang Ling.

Picking up on a trope used in the earlier film, from girlhood heroine Pearl, a young noblewoman, receives training designed to increase her leg-strength, consisting of her wearing heavy iron shoes. By the time she reaches young womanhood, she runs around normally despite the weight.  But evil forces conspire against her family, all of whom are wiped out.  Only Pearl survives, because her uncle, just before he dies, instructs her to take off her shoes.  Once she does so, she finds that she can leap about with gravity-defying bounds, allowing her to escape the assassins temporarily.

If this were her only skill, the film would deserve the label "uncanny," for her enhanced strength would be along the same lines as that of Tarzan, whose formidability results from the rigor of his life with the apes.  However, there's also some oblique references to magic here, as well as some technology that doesn't belong in medieval China, which bump the film into the marvelous category.

Though Pearl escapes her family's killers, she has no real fighting-skills, though she does manage to trounce a gang of bandits who assault her later.  She also meets a handsome young swordsman and his comic retainer, though only at film's end will she learn that the swordsman is no less than the Emperor himself, traveling incognito as he seeks out the same group of assassins, albeit for his own reasons.

Pearl's enemies overtake her once more and she's flung into a mountain crevasse.  Her fall is broken by a pool inside the mountain, but the pool is part of the domain of a crippled old hermit; a domain filled with peculiar giant flowers and mushrooms.  The old man lost his legs to the same fiends who killed Pearl's family, and for years he's been cultivating a "medicine pool" which would somehow help him gain his revenge.  He yells at Pearl, claiming that she's soaked up all the power of his pool, but she tries to make nice by becoming his apprentice.  Later, after various comic training sequences-- none of which involve weapons-- the old man dies and claims that he's passing his spiritual power on to Pearl.  The audience sees no evidence of this, except that when Pearl goes after her enemies, she not only possesses her leaping-power but peerless sword-skills.

The more serious fight-scenes that follow include some wild fantasy-battles, though Chang Ling herself isn't an especially convincing fake-fighter.  In the end, Pearl's forced to spare the main villain because he's the brother of the Emperor, and must face the Emperor's presumably more lenient justice.  Oddly, Pearl and the Emperor part ways at the end, with an odd remark about her being unable to stay with him because she's a "commoner."  The opening made it look like she was of noble family, but maybe the translation's at fault there.