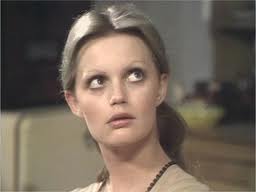 Though I wouldn't normally review the episodes of a television-anthology series (like, say, TWILIGHT ZONE) as distinct works, the episodes made for Brian Clemens' BBC series THRILLER have often been released to television in formats that suggest telemovies rather than TV episodes.  Further, these short (usually a little over 60 minutes) stories have often been included in metaphenomenal film-concordances, so whatever their origin, their reception is that of full-fledged movies.

I don't anticipate reviewing a lot of THRILLER movies.  Some of them are adequate timewasters, but many of them display not only their cheapness but also a cavalier tendency to fill screen time with meaningless scenes of people driving cars or ascending stairs.  In other words, many of them are extremely boring, regardless of the acting-talent involved.

A PLACE TO DIE, directed by Peter Jefferies (one of three THRILLERS he executed), is an above average exercise in TV-style terror.  Doctor Bruce Nelson and his wife Tessa move to a small rural English community, planning to make a new life.  Unfortunately for them, prior to the move Tessa injured her ankle in a minor accident, so that she limps and walks with a cane.  The superstitious locals-- many of whom also have a limping deformity, diagnosed by Bruce as congenital due to inbreeding-- regard her as the destined bride of their true deity: Satan himself, though at times he sounds more like a pagan crop-god.

The Brian Clemens-Terence Feeley script certainly isn't interested in the issues of religion and aesthetic life raised by the far superior WICKER MAN from the Peter Schaffer play. Still, even if one anticipates the real reason that the locals go out of their way to be extra kind to the new arrivals, the tension remains high because all of the actors play their roles with an intensity not found in a lot of THRILLER films.  There's a touch of the idealization of the "archetypal blonde goddess" here-- the Satan-worshippers also fixate on Tessa because she's "moon-pale and moon-golden"-- in spite of the fact that everyone in the film is Caucasian.  The presence of a mute character dressed in faintly Harlequin-esque garments adds to the general sense of strangeness, so that this fulfills the uncanny version of the "weird families and societies" trope.
Posted by Gene Phillips at 4:28 PM
Email ThisBlogThis!Share to TwitterShare to FacebookShare to Pinterest
Labels: the uncanny, weird families and societies (u)