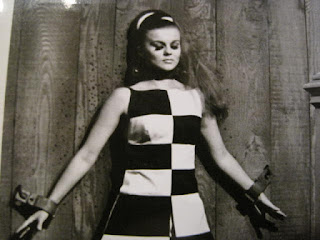 
The one thing that distinguishes the “Matt Helm” films of the 1960s is how well they capture the “PLAYBOY swinger” culture of the period.  The films take the name of the hero, and titles of selected books, from the Donald Hamilton “Matt Helm” paperback series, but nothing else, for the books are hardboiled, naturalistic espionage adventures.  The four films starring Dean Martin as superspy Helm exist in a world even more flagrant with science-fiction gadgets and gimmicks than the entirety of Bond films from that decade.  The phenomenality of this world, with its solar death rays and coat-buttons that turn into grenades, cannot be other than marvelous in nature.


The symbolic discourse of the Helm films, though, is more dubious.  Though I’ve said the films embody the “swinger” cultural fantasy, saying that doesn’t give one any means by which to judge the *mythicity* of these spy-fantasies.  As mentioned elsewhere, a narrative has high mythicity in relation to the complexity of its symbolic discourse, quite apart from its value as pure entertainment.


So what if the entertainment is politically incorrect?  The Helm films, like many superspy narratives— particularly the James Bond novels of Ian Fleming, the main source of the subgenre—constantly put hot women on display, though not as explicitly as the infamous PLAYBOY spreads.  At the same time, the superspy genre wasn’t entirely devoted to the humiliation of women, and it spawned not a few characters—Emma Peel, Modesty Blaise—who became icons of feminine (and sometimes feminist) rebellion.


As it happens, one of Ian Fleming’s characters, Pussy Galore of the 1959 Bond novel GOLDFINGER, has become one of the mythic touchstones of both the novel series and the film adaptations of the Fleming books.  And this mythicity remains strong despite the fact that her creator depicts her in rather demeaning terms, while her film-adapters depict her in more empowering (and for this time, more politically correct) terms.  The coyly-named Miss Galore, then, offers a paradigm for showing mythicity in spite of the creator or adapter’s political orientation.


In Fleming’s book, Galore—a lesbian henchwoman of the titular villain Goldfinger-- symbolizes all of Fleming’s conservative—even primitive—opinions on the nature of lesbianism.  By the book’s conclusion Bond wins Pussy over for Team Hetero, though there's some intimation that she joins him against Goldfinger as a way of reducing her sentence.  That said, in her prose appearance Pussy’s mythicity rates as “fair” given that Fleming makes her the vehicle of his sociological beliefs in a relatively thoughtful manner, no matter what one thinks of said beliefs.


In contrast, the Pussy Galore of the 1963 film GOLDFINGER barely references the lesbian nature of the book-version, though there are a few lines to indicate that Pussy resists Bond’s suavity because she plays for another team.  This Pussy is portrayed on screen by actress Honor Blackman, who prior to the 1964 film had essayed a heroic female spy-type on the AVENGERS teleseries.  Possibly in deference to fans who expected Blackman to play another such character, film-Pussy defends herself against Bond’s advances with judo-skills.  Bond still manages to convert her to his team, this time with a forceful persuasion that some would consider rape.  In the end she still joins him against Goldfinger, however, with a little less implication that she did it to save herself some years in prison.
Therefore, when I evaluate the way the Matt Helm films stack in comparison in terms of either demeaning or empowering archetypes of femininity, they stand or fail not in terms of political correctness, but according to the “Pussy test.”


Oddly, THE SILENCERS begins with hero Matt Helm (Dean Martin) no longer working for the American intelligence organization I.C.E., though the nature of the dispute is never disclosed. He doesn’t seem worried about being out of a job, and still maintains an expensive bachelor pad, a secretary, and assorted seduction amenities, not least being an automated bed that dumps into occupants into a waiting pool.  (No worries about a dearth of “precious bodily fluids” here.)  Female agent Tina (Daliah Lavi), one of Helm’s many former lovers, successfully brings Helm back into the fold to thwart the master plan of Chinese mastermind Tung-Tze (Victor Buono), which will foment nuclear war between the superpowers.  By film’s end Tina’s mission to return Helm to the field will look a little strange, for then it’s revealed that she’s a double agent working for Tung-Tze.  Say what you will of Bond’s villains; at least they don’t go out of their way to encourgage the hero in his heroic efforts.


As in many superspy films, the sophisticated “bad girl” finds competition for the hero’s favors from a more naïve heroine, often a non-combatant accidentally drawn into the spy game.  When Helm and Tina seek out an informant—played by apparently slumming musical-star Cyd Charisse—the informant is killed and Gail (Stella Stevens) is the last to hear the informant’s dying words.  Due to various contrivances Helm suspects Gail of being a henchwoman of his enemy.  He then goes out of his way to maltreat her, such as ripping off her dress to look for concealed weapons.  Gail calls him a “sadist” at this point, and there certainly does seem a sadistic vibe in the script, going far beyond the usual movie-motif of showing two potential bedmates butting heads.  Though the audience pretty much knows that Gail is just an unlucky innocent, she’s still the victim of innumerable “comic” humiliations.  At least when the James Bond of the GOLDFINGER book bends Pussy Galore to his will, he actually thinks he’s doing her a good turn.


Probably the most noteworthy scene in the film—far more memorable than the hero’s anemic fights and gun-battles against the villain’s forces—transpires when Helm forces Gail to accompany him on a cross-country trip to check out the last words of the informant.  When they camp out in the car for the night, Helm—despite his professed belief that Gail’s an enemy spy— casts forth enough innuendos that Gail tries to sleep outside the car.  The script promptly spends several minutes deluging her with rain and mud, so that she eventually gets back in the car and succumbs to the inevitable.  One wonders if the scriptwriter was punishing some girl who left him sitting alone in his car at Makeout Point.


Eventually Helm and Gail are captured by Tung-Tze’s forces and are conveniently brought to the villain’s base of operations, where Helm proceeds to break free and destroy everything with his button-grenades.  Tina proves herself to be bad and Gail overcomes her naivete enough to assist Helm to a small degree.  The climax isn’t very impressive even for a Bond imitation, though it’s of interest that Victor Buono—known for scenery-chewing villains like “King Tut” on the BATMAN teleseries—plays the character of Tung-Tze straight, succeeding in giving him a quiet menace.


MURDERER’S ROW follows the same pattern as SILENCERS.  Malevolent mastermind Julian Wall (Karl Malden) captures American scientist Dr. Solaris in order to wring from him the secret of (what else?) a solar super-weapon, with which Wall hopes to bring the world to its knees.  In this Wall has the usual small army, and two main allies.  One is the “bad girl” of the story, Wall’s mistress Coco (Camilla Sparv), who proves somewhat sympathetic to Helm’s cause, though for a change she doesn’t become one of the superspy’s bed-partners.  Wall’s other main aide is “Ironhead,” a tough enforcer-type who has a metallic dome covering the top of his skull.  This character proves more visually imposing rather than Malden’s unimpressive mastermind-character, and makes it possible for Helm to engage in a few half-decent fight-scenes.


Again, the most impressive element in the script is the “innocent outsider/good girl” who gets drafted into Helm’s adventure—but the script’s treatment of Suzie (Ann-Margret) is precisely the opposite of SILENCERS’ treatment of Gail.  As Suzie is the daughter of the captured scientist Solaris, she’s automatically given a greater motive for becoming Helm’s aide despite her inexperience, but the script also goes out of its way to make her as clever and vivacious as Gail was made klutzy and awkward.  Indeed, Ann-Margaret’s characterization of Suzie is of a piece with a similar “hot number” in 1964’s VIVA LAS VEGAS. In that film, Ann-Margret’s energy was well-matched with that of Elvis Presley.  Here, when Suzie tries to dance with Helm at a discoteche, he’s almost immediately exhausted by her energy—one of the few times any of the four Helm films acknowledge Dean Martin’s advancing age.  Perhaps Ann-Margret’s greater star-power insured that the scripters didn’t try to put her through the same wringer they used on Stella Stevens.


MURDERER’S ROW, in addition to giving audiences a more vibrant heroine, is richer in its employment of quasi-surrealistic fantasy-scenarios.  Helm is picked up in the scoop of a huge steam-shovel.  Helm drives a hovercraft through the streets of a major city.  Ironhead imprisons Helm in a giant centrifuge and jokes that it’ll turn Helm into a “milkshake” with its pumping action.  Given that from the first the series was focused on exploiting the most fantastic aspects of the Bond film-series, it’s somewhat pleasant to see ROW go all-out in the absurdity department.


Finally, we come back to “the Pussy test.”  Suzie is certainly a more admirable heroine than Gail, but does she possess any greater symbolic complexity?  The answer is no, though with the caveat that none of the characters, including Matt Helm, are anything more than simple stereotypes.  Oddly enough, SILENCERS ends with a come-on for the same-year sequel, and pays unusual attention to repeating the name of  the secretary-character seen briefly at the film's beginning: “Lovey Kravezit.”  Maybe the producers wanted to make sure everyone in the audience "got" the transparent pun modeled on “Pussy Galore.”  But the imitation of the name is all that the Helm series could duplicate.  In every other way, strangely for a series so devoted to heterosexual conquest, the filmmakers just couldn't manage to “get Pussy.”