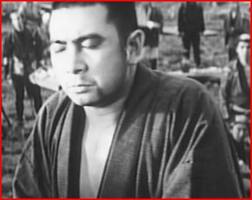 In one of my essays for my litcrit blog THE ARCHETYPAL ARCHIVE, I drew a comparison between the medieval adventure-story of the character "Amlethus," which Shakespeare transformed into the sophisticated dramatic play HAMLET:

",,,the original Hamlet stories of the medieval historian Saxo Grammaticus, taking an adventurous approach, present the hero as cleverly pretending madness as a ruse to deceive his enemies.  Shakespeare transforms this notion into a critique of Hamlet's own rational mind and of his responses to his father's murder-- and in so doing, signals that the reader must be more critical toward Hamlet than Hamlet is.  Whereas in the adventure-themed folklore story of Hamlet the evil can be cast out without harm to the society, in a drama the hero is implicated in the evil and is "purged" no less than the villain."

The two films considered here take the opposite approach: the earlier starts out as a purgative drama, while the other takes the shape of a hot-blooded adventure-tale.  Both concern a species of the "uncanny-metaphenomenal" I've not yet written about: that of the blind warrior who seems to possess senses beyond any naturalistic sphere.

In 1962 ZATOICHI (the full title is THE TALE OF ZATOICHI) launched the first in a series of samurai stories focused upon the blind swordsman of the title (though only "Ichi" is his proper name; the entire designation translates to "blind itinerant low-class Ichi.")  The name denotes an important sociological motif in the first of the Zatoichi films, which continues to appear in at least some of the subsequent films in the series.  Like many heroes of popular fiction, Zatoichi addresses conflicts within his society. Prior to losing his vision, Zatoichi, born into a low class in Japan's "Edo era," is expected to be deferential to his betters, but he anticipates ill treatment and becomes a peerless swordsman in order to defend himself.  After losing his sight, Zatoichi wanders Japan, plying his trade as both a masseur and a gambler.  Sooner or later, however, his skills as a swordsman are called into play.  In the first entry, two rival gangster-factions are battling in the town where Zatoichi happens to wander.  One group tries to hire him against their enemies, while the other enlists another samurai to take on the blind swordsman.  There are other dramatic crossplots, but the inevitable conflict of the two warriors is the center of the drama.

Only a few scenes are devoted to the blind warrior displaying his peerless skills, easily the superior of many sighted men, and thus are the only manifestations of the uncanny-metaphenomenal within the "outre outfits skills and devices" trope.  These exhibitions are clearly secondary to Zatoichi's interaction with the other characters he meets-- splendidly essayed by lead actor Shintaro Katsu, who exclusively played the role in films and TV until his 1997 death.  Zatoichi himself has decidedly mixed feelings about his lonely, borderline-criminal existence.  In keeping with other serious samurai-dramas of the time, though there are situations that demand combat, there is no pleasure taken in combat, none of the glorification of the hero that marks the adventure-mythos.  Other Zatoichi stories may cleave more toward adventure than this one, but the original opus clearly follows the dramatic path.

The 2008 film ICHI posits that the wandering swordsman passed his skills on to a female student, also blind, who also took his name.  As Young Ichi has no family, she's taken in by a group of *goze* (a guild of blind female musicians), but after Ichi's raped by a man, the guild casts her out.  Despite having killed her rapist, Ichi's loss of her peer group is the greater trauma, so she too takes up an itinerant lifestyle, wandering the land in search of her father-surrogate.  Instead she finds surrogates for a couple of brothers: Kotaro, a little boy who calls her "sis" and Toma, a young man roughly her own age.  Toma has sword-skills roughly comparable to Ichi's own but can't use them readily, having undergone an emasculating trauma as a result of having accidentally blinded his mother during sword-practice.  Happily, though this all sounds like it should have a Freudian subtext, what with Ichi seeking her "lost father," the psychologizing is kept to a minimum. 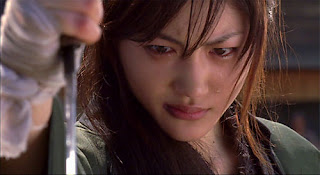 Both Ichi and Toma become involved in battling a gang of marauders called the Banki-to, led by a man who once dueled Zatoichi and lost.  The presence of these unquestionable villains does much to edge the story more toward the pattern of the adventure-mythos.  In addition, Ichi's near-miraculous displays of swordswomanship are handled with a greater attention to sheer spectacle.

This isn't to say that the dramatic aspects are neglected.  I've seen some reviewer-complaints to the effect that Ichi is too one-dimensional in comparison with her male predecessor.  I don't agree.  Actress Haruka Ayase plays a character who has largely withdrawn into herself due to her traumas, yet even from the first, her capacity for normal emotion is strongly suggested.  In an early amusing scene, Ichi saves the largely powerless Toma from several bandits.  When he tries to claim, as a salve to his pride, that he actually saved her, Ayase barely changes expression, but just enough for Toma to accuse her of laughing at him ("You snorted, didn't you?  You snorted through your nose!")  Later, she confesses to Toma that she can't form bonds with others due to her exile from her guild, which has left her feeling as if she has no borders-- a thing that proves particularly ennervating to a blind woman.

There's also a fair amount of wry humor here, though I will admit that the actor playing the main villain overplays his role, when he would have proved more menacing as a subtler kind of adversary.