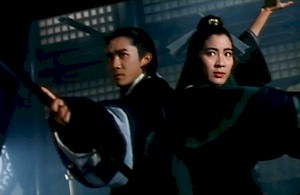 
I've only seen a handful of Chinese/Hong Kong-produced movies based on Asian novels, but with the exception of CROUCHING TIGER, HIDDEN DRAGON, those I've seen are notable for a plethora of melodramatic incidents and for tossing out characters willy-nilly, as if expecting that the audience will already know the significance of each and every character. BUTTERFLY AND SWORD, for instance, introduces one supporting character near the film's beginning who doesn't show up again until the climactic conflict, where he proves to be the only way the other characters manage to vanquish the head villain.

Of course, BUTTERFLY is a big splashy adventure-romance, and from one vantage it shouldn't be penalized for lack of verisimilitude any more than THE EXPENDABLES.  Both adventure-films are about highly kinetic stuntwork first and everything else second-- though when such a film takes a stab at characterization, a reviewer is obliged to mention it anyway.

BUTTERFLY takes place in a fantasy-version of the Ming Dynasty, and concerns, as do so many other films in this genre, massive battles between rival kung fu schools/clans.  The focal characters comprise a fairly pedestrian four-sided triangle, three of whom began as street urchins who band together as petty thieves in their youth and somehow become martial arts masters in their adulthood.  These are leading man Brother Sing (Tony Leung), who is loved by Sister Ko (Michelle Yeoh).  Brother Yip loves Sister Ko, who can't see him, while Brother Sing marries a woman outside the martial-arts tradition, nicknamed Butterfly (Joey Wang).  Ko is jealous of Butterfly and Yip is jealous of Sing, leading to the usual heartache.  Sing, Ko amd Yip also function as assassins for their Master Li, attempting to winnow away the competition-- a fact which doesn't make them especially sympathetic, given that the film spends no time trying to explain why their side is better than the opposing group.  Only Sing is portrayed as slightly reluctant to go on with this life-- he maintains a sort of "Clark Kent" identity as a harmless businessman in order to shield Butterfly from his ttue work-- but when push comes to shove, Sing proves willing to go around knocking off the competition.  Sister Ko particularly wants her group to become "masters of the martial arts world" with the idea that this will help her persaude Sing to stay by her side, but Sing can't think of her as anything but an elder sister, despite the fact that they have no blood relation.  Nothing interesting is done with this potential quasi-incest vibe, and it's never clear just why Yip can't just man up and proclaim his love.  In an alternate ending seen on one DVD, Ko commits suicide and Yip joins her with some last-minute romantic appeal.

BUTTERFLY is a colorful, messy and somewhat gory production, with dozens of kung-fu stunts that go far beyond the level of "uncanny kung fu" that I've treated in this review.  There are a lot of kung-fu films in which characters do fantastic things that still (in theory) don't violate natural law, in that they've the result of a fighter's unusual skills.  But when BUTTERFLY has one character rip a stone pillar from its roots to use as a club, and later comes back to life even after his head's been kicked off (!), I think we're dealing with the category of the marvelous-- presumably "explained," to the extent that these things are ever explained, with the Chinese concept of kung-fu masters using "chi" to accomplish all manner of marvelous feats.  Michelle Yeoh's glamorous aura helps her steal every scene she's in, and the fight-scenes are never dull, thanks to the choreography of action-director Siu-Tung Ching.  That said, BUTTERFLY is far inferior to Ching's best work in works like THE HEROIC TRIO, THE DUEL, and HOUSE OF FLYING DAGGERS.


One other categorization-aspect of the film that interests me is the question, "Who's the hero"-- or in this case, "who's the quasi-superhero?"  Yip barely appears in the story, not unlike the last-minute savior mentioned above, so at best both would appear to be "support-cast," not central heroes.  Butterfly certainly is never more than support-cast.  This leaves Sister Ko and Brother Sing, who are roughly comparable to many of the male-female fighting-duos throughout kung-fu cinema in all three of its phenomenal categories.  But though many such films the duo are essentially co-equal partners in the story, and should share billing as "central heroes," BUTTERFLY isn't one of these.  Sister Ko functions less like a battle-partner than an impediment to Sing's reunion with Butterfly.  Thus, were I attempting to categorize BUTTERFLY AND SWORD's central heroes for the "Everything Resembling a Superhero List" that I've mentioned from time to time, only Brother Sing would qualify for inclusion there.


Posted by Gene Phillips at 3:32 PM
Email ThisBlogThis!Share to TwitterShare to FacebookShare to Pinterest
Labels: combative adventures, the marvelous