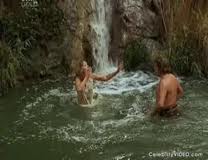 I see that a number of imdb reviews declare this to be one of the best of the British "Carry On" series, and I'm no exception to this rule.  While I haven't usually found the Carry On films to be all that funny, JUNGLE coaxed a fair number of chortles from me.  In fact, it's the best "jungle-adventure" spoof I've ever seen in movie-form, and in other media its only real competition would be the teleseries GEORGE OF THE JUNGLE and some of the MAD comics-parodies.

Perhaps because the British people originated most though not all of the basic rudiments of the jungle-adventure genre, the Carry On crew is unusually thorough in demolishing most of the cliches of that genre.  It begins with a typical collection of dotty (and randy) Brits journeying to the depths of the African jungle.  Not all in the party have come for the same reasons. Professor Inigo Tinkle (Frankie Howerd) has come looking for the rare Oozlum bird, while Lady Evelyn Bagley (Joan Sims) is searching for some clue that might explain the long-ago jungle-disappearance of her husband and her young son.

For some reason the setting of the jungle does a great job of bringing forth the mainstay of the Carry On films: sex, sex, and more sex-- though with what we would term a "PG" mentality today.  At least two of the mighty white hunters pursue the rather mature charms of Lady Bagley, while her traveling-companion June (near-soundalike for "Jane") ends up with a wild man named Ugh-- who turns out to be Lady Bagley's lost son, though one never knows what wild beasties raised the blundering jungle-man, who has the GEORGE-like habit of swinging into trees.  And whereas Tarzan at least knew what human women looked like-- though Edgar Rice Burroughs was careful to state that the hero was never tempted by African females, only by his first encounter with a woman of his own kind-- Ugh has apparently never seen a woman until encountering the safari.  In an odd touch, the first pair of female breasts he focuses on are his mother's (maybe remembering infantile experiences?)  Later he proves much more interested in the way June busts out all over, but though Ugh and June intend to rendezvous in June's tent, a gorilla ends up in June's tent and Ugh winds up in his mother's bed.  Perhaps needless to say, neither Ugh nor the gorilla scores that night.

Ugh isn't a very formidable jungle hero, but in keeping with the type, he does at least have the Tarzan-ish power to call a herd of elephants for a big rescue-scene.  Naturally, he does so at the wrong time and to the wrong enemies.

The other main source of uncanny phenomenality-- not to mention sexy hijinks-- is an Amazonian tribe comprised entirely of white women, except for a male king, who is of course Lady Bagley's lost husband.  Despite the fact that almost all the women in this "exotic land" are stunningly attractive, none of them have been able to birth male offspring, but they're more than willing to keep experimenting with the new arrivals from Britain.

It's interesting that although as noted all of the Amazons are white-- apparently such a dominant trope that the scriptwriter doesn't even bother explaining how they got there-- one of the advertising posters showed them as dominant black women: 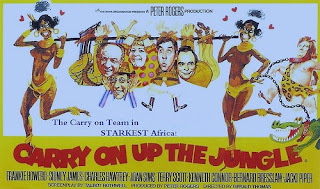 However, this poster was more accurate as to the actual look of the women: 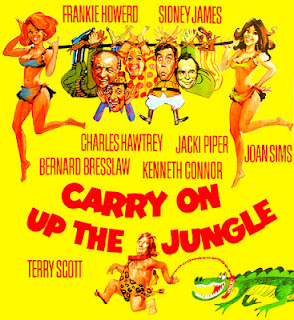 The "female native" poster is about the only objectionable thing one could find in the film's harmless depiction of black natives.  There are various bearers, led by a goofus named Upsidaisi (probably a joke aimed at "Umsloppogas," the heroic chieftain of KING SOLOMON'S MINES), and there's a black tribe that threatens to kill and maybe eat the dopey white trespassers.  But in no way could one think that the black characters here were any sillier than the white ones, and indeed they're a good deal less so.

Posted by Gene Phillips at 2:04 PM
Email ThisBlogThis!Share to TwitterShare to FacebookShare to Pinterest
Labels: exotic lands and customs (u), outre outfits (u), superlative skills (u), the uncanny