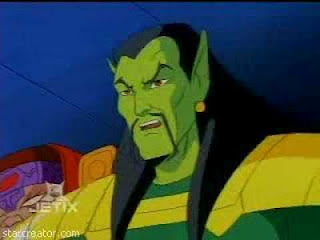 I barely saw the 1990s IRON MAN cartoon in its original broadcast, but a recent DVD compilation of its two seasons spurred me to check it out in detail.  It proved a tough slog.  In another review I said that AVENGERS: EARTH'S MIGHTIEST HEROES did an excellent job of translating the appeal of Marvel comic books into animated TV adventures.  IRON MAN's first season is so bad that it's very nearly the polar opposite of AEMH, though the balance of the second season brings the whole's rating to merely mediocre.

I have no idea who thought it was a good idea to take a cartoon titled "IRON MAN" and have the main hero share the stage with a group of Marvel heroes who enjoyed their own not-especially-successful comics-series around the same time, FORCE WORKS. I don't know why anyone would've thought that a cartoon about Iron Man had to mirror the events of the character in the comic books (Iron Man had formed the Force Works team around that time).  Did someone think that they could spin FW off into its own TV series?  The world may never know.

The presence of the FW heroes (Hawkeye, Scarlet Witch, War Machine, Spider Woman and a portentous deadhead named Century) isn't the only thing nearly crowding Iron Man out of his own cartoon.  The main villain is Iron Man's old foe the Mandarin, who maintains a small division of super-villains torn from the pages of Marvel comics.  The villains, like the heroes, are tedious and lacking any of the character touches that helped make Marvel the leader in its field. A particular awful adaptation is the super-villain Modok, a world-beater in the comics, but turned into Mandarin's dim stooge for the sake of an easy comic relief.

The stories of the first season are almost uniformly flat and unexciting, to say nothing of their being crudely animated.  Most stories deal with Mandarin and his thugs making some sort of attack on Stark Industries, only to be beaten back by the Armored Avenger and his costumed coterie.  Most of the character's origins and backgrounds are ignored, and of the few characters who do get an origin, the Mandarin gets his before Iron Man does!  (More on the sociological undertones of the Mandarin's origin later.)  Once or twice the series makes some facile comment on Tony Stark's character flaws, but it's like a bad imitation of even the most simplistic Marvel melodramatics.

The second and last season had nowhere to go but up, and evidently a new animation team decided to eject most of the Force Works characters from the series, though two of them, War Machine and Spider Woman, remained present in their civilian identies and only rarely donned superheroic garb.  The stories, though no better than average, observed basic story-construction principles and made some effort to explore Tony Stark's nature as a "lone wolf" hero.  The Mandarin's flock of supervillains were also ditched, and the villain himself was sidelined until the season's climax.  In their place, the series incorporated several of Iron Man's rogues' gallery (Firebrand, Sunturion), and even adapts a few comics-stories tolerably well (the "Armor Wars" continuity).  One could probably watch the episode "Hulk Buster" and get a good sample of the series at its average best.

To return to the matter of the Mandarin's re-imagined origin: the comic-book villain was a standard "Chinese peril" villain-- that is, not made a villain because he was of the "yellow race," but because, being Chinese, he  represented a rival to the growing American technocracy of the period.  In the comics, the Mandarin was a half-Chinese aristocrat who acquired ten super-powerful rings from the alien ship of a dragonlike alien.  In the teleseries, the Mandarin gains his rings from a race of still-living dragon-aliens, one of whom is given what may be Marvel Comics' all-time-cheesiest monster-name: that of "Fin Fang Foom."  This was not particularly resonant, but it wasn't objectionable.  However, the series' scripters were apparently leery that they might be accused of racism if they dared adapt a villain with any link to a "Yellow Peril" past.  Therefore, the new Mandarin is a European who gains the power and general look of an Asian overlord from an ancient Chinese enchantment.  This struck me as a more insidious form of racism: an attempt by the scripters to keep their hands clean by refusing to use an Asian character as a villain for fear of adverse reaction.

Ironically, by doing this the cartoon also managed to accidentally promote another racist stereotype: the Mandarin-origin shows a goodguy-Chinese preparing to sacrifice his life to save two white people from death. The character-- given the awful name of "Wellington Yinsen"-- survives to become a captive of the Mandarin at the same time Tony Stark is abducted by the villain. As a similar "Yinsen" character did in the comics, this one helps Stark make his fabulous armor and thereby escape the villain's clutches-- after which Yinsen dies and the Mandarin obsesses about regaining the armor for his own use.  Happily, the 2008 live-action film showed more intelligence in adapting the Vietnam-era origin of the comics, resulting in a work that was much more affecting.

Posted by Gene Phillips at 2:51 PM
Email ThisBlogThis!Share to TwitterShare to FacebookShare to Pinterest
Labels: combative adventures, the marvelous