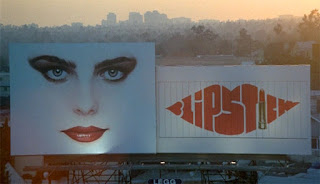 In his book THE PROBLEM OF PAIN, C.S. Lewis writes:

There is no possibility of arguing from mere danger to the uncanny, still less to the fully Numinous. You may say that it seems to you very natural that early man, being surrounded by real dangers, and therefore frightened, should invent the uncanny and the Numinous. In a sense it is, but let us understand what we mean. You feel it to be natural because, sharing human nature with your remote ancestors, you can imagine yourself reacting to perilous solitudes in the same way; and this reaction is indeed ‘natural’ in the sense of being in accord with human nature. But it is not in the least ‘natural’ in the sense that the idea of the uncanny or the Numinous is already contained in the idea of the dangerous, or that any perception of danger or any dislike of the wounds and death which it may entail could give the slightest conception of ghostly dread or numinous awe to an intelligence which did not already understand them. When man passes from physical fear to dread and awe, he makes a sheer jump, and apprehends something which could never be given, as danger is, by the physical facts and logical deductions from them.


I've discussed the distinctions between the qualities of Lewis' trinity of "fear, dread, and awe" in this ARCHETYPAL ARCHIVE essay,  but I won't go into a lot of theory-oriented detail here.  Rather, I want to apply the theory to three "perilous psycho" movies in order to what puts them either in the realm of the naturalistic (and thus dealing principally with "the fear of danger") or in the realm of the uncanny (and thus dealing principally with "ghostly dread.")


Of the three films cited here, LIPSTICK would be the least likely to find its way into the annals of metaphenomenal cinema.  Helmed by longtime television-director Lamont Johnson, LIPSTICK is a very straightforward thriller in which a young model named Chris (Margaux Hemingway) is raped by an acquaintance-- her young sister's schoolteacher Gordon (Chris Sarandon).  Her victimization is followed by yet more humiliation, when the innocent-seeming Gordon succeeds in convincing a court that his sex with this high-rolling fashion-model was consensual in nature.  Later, when Gordon menaces Chris's little sis Kathy (Mariel Hemingway), Chris gets hold of a shotgun-- rather conveniently within her reach just when she needs it-- and blows the rapist scumbag away.

LIPSTICK is about as elementary as an adult-targeted thriller can get.  Chris is horribly maltreated by her tormentor; Chris gets even with vigilante justice-- and also gets vindicated for manslaughter charges just as easily as her rapist did for his crime.  The script is so horribly schematic and by-the-numbers that even mediocre knockoff-flicks on the revenge-theme-- such as LAST HOUSE ON THE BEACH, a blatant rip of LAST HOUSE ON THE LEFT-- are more resonant than this glossy, empty exercise.  At no time does the sparsely-written screenplay even attempt to get into the heads of either the rapist or his victim, not even in the most simplistic manner typical of telefilms.  At no point does this film evoke any emotion except the naturalistic fear of danger.

LIPSTICK deals with a instance of "acquaintance rape," committed by an ordinary-looking man with a psychotic edge.  The villain of 1981's EYES OF A STRANGER (played by John DiSanti) looks just as ordinary as LIPSTICK's rapist-villain, but he operates on a larger scale, terrorizing the women of Miami by both raping and killing several victims.  By itself, however, the larger scale of this psycho's endeavors does not transform the narrative's phenomenality from naturalistic to uncanny, from the realm of simple fear to a more complex dread.  The Lifetime cable-channel is replete with dozens of telefilms featuring serial killers, serial rapists or combinations thereof, few of which evoke the sense of uncanny dread.

EYES debuted in theaters at a time when psycho-slasher films were still in ascendance, but this film's killer has little in common with the more colorful fiends of the period: he isn't deformed, wears no distinctive mask or clothing, and uses no special gimmicks or bizarre methods to commit his murders-- all in spite of the fact that one of the writers credited with the EYES screenplay also worked on the seminal 1980 FRIDAY THE 13TH.  Nevertheless, for all the naturalistic touches here, the script does give the villain a larger-than-life quality that confers a sense of dread to the proceedings.  For one thing, though the psycho-rapist never earns a distinctive nom du crime, on occasion the heroine, news reporter Jane Harris (Lauren Tewes), dubs him "the Phone Freak" because he preys on women after tormenting them with lascivious phone calls. His first on-screen victim complains about the perverted phone calls to the police, only to be told that she's just one of many women being so harassed, which conveys the sense of Miami being gripped by an epidemic of malicious male behavior.  The conspiracy of evil males particularly afflicts Jane Harris due to the fate of her younger sister Tracy (Jennifer Jason Leigh), who lost her sight due to a trauma brought on by kidnapping and molestation.  Jane attempts to rouse the public against the serial murderer, only to find out that the Phone Freak occupies her own building.  This leads to a creepy scene in which the Freak invades Jane and Tracy's apartment and tries to rape the blind girl-- who nonetheless defends herself pretty well until her sister comes to the rescue (accompanied by a Tom Savini "exploding head" effect).

I can easily imagine a Lifetime movie adapting the essential plot of EYES and reframing it into entirely naturalistic terms.  However, the approach of director Ken Weiderhorn-- best known for 1977's Nazi-zombie film SHOCK WAVES-- gives the proceedings a vibe that suggests the uncanny despite all the mundane trappings. 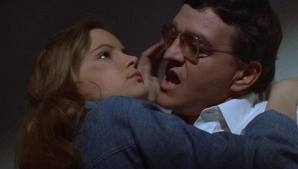 Whereas the villain of EYES communicates a perverse "Jack the Ripper" theme despite the film's surface naturalism, COLOR OF NIGHT swings back toward the realm of the naturalistic even though it too deals with a serial killer who racks up an impressive body count.

Rather than being motivated by pure lust, COLOR's villain is your basic "psycho with a grudge."  Hero-psychologist Bill Capa (Bruce Willis) finds his heart full of Hitchcock-esque insecurities after one of his patients kills herself before his eyes.  Despite his self-doubts, Capa finds himself committed to take over a colleague's "encounter group" after that colleague is savagely murdered by a knife-wielding killer, heavily garbed so as to keep the psycho's gender ambivalent.  As the psycho targets other victims, Capa finds himself thrust into the role of amateur detective, despite the fact that real police detective Martinez (an abrasive Ruben Blades) strongly discourages such investigations.  All of the members in the encounter group are obnoxiously demented in one way or another, making all of them potential suspects.  In addition, Capa finds himself enthralled by a mysterious woman named Rose (Jane March), with whom he has a lot of hot sex even though he doesn't fully know who she is.  Naturally, she turns out to be implicated in, though not directly responsible for, the continuing murders.

The nature of this film's psycho-stalker is in some ways more extreme than that of EYES OF A STRANGER.  The knifing-scene isn't unusual in any way, but in the film's "big FX" scene, he does execute a naturalistic version of a "bizarre crime" by attempting to push a parked car off a rooftop onto Bill Capa's head! Atypical as this murder-attempt is, though, I don't think it edges into the realm of the uncanny.  In essence the modus operandi of trying to drop a car onto a victim's skull is only a slight extension of other scenes in which the mystery-killer tries to menace Capa on the freeway with standard auto-chase scenes. 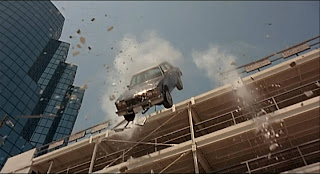 Similarly, at the climax the psycho menaces Capa with a nail gun, which might remind many slasher-fans of the murderous tools employed by the uncanny-type slashers seen in 1978's TOOLBOX MURDERS and (even more fittingly) 1985's NAIL GUN MASSACRE.  Yet, whereas the mundane tools in these films become icons of the killers' savageries, the nail gun in COLOR remains nothing more than an instrument of "fear," and never ascends to the creepier level of "dread."

COLOR does have some very steamy sex scenes going for it, but the characters' psychological complexes are anything but, well, complex. Director Richard Rush had not helmed a feature film since 1980's THE STUNT MAN, and following the box-office failure of COLOR, Rush never again assumed directorial duties.  The script by Billy Ray and Matthew Chapman follows the basic structure of Hitchcock's VERTIGO (Capa's trauma eventuates in the loss of his color vision in the same way VERTIGO's traumatized protagonist is symbolically castrated by his inability to endure high places).  Rose seems less like an individual character than a condensation of Freud's "madonna-whore" complex, with a lot of sexual ambivalence thrown in for good measure.  It's a shame that COLOR is such a workmanlike script, for Bruce Willis and Jane March engage their thin roles with a great deal of gusto (and not only in their sex scenes).  As things stand, COLOR interests me largely as an illustration of how the "bizarre crimes" trope can remain within the sphere of the naturalistic, even though it possesses the potential for the uncanny (e.g,, the less-than-uncanny "nail gun.")