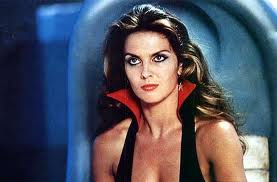 In contrast to the just-reviewed STAR ODYSSEY, Luigi Cozzi's STARCRASH is the perfect example of how one *should* do a bad ripoff of STAR WARS.

I criticized ODYSSEY for having no narrative drive.  Cozzi's film at least shows that its director understood one great appeal of STAR WARS and space-opera: the fast-paced shuttling around from one exotic planetscape to another.


That's not to say that Cozzi has the skill to give this exotica any visual panache.  Whether his heroine Stella Star (Caroline Munro, above) visits a planet of dense snow or an underground mining-facility, the settings never look like anything but jumped-up movie-sets.  This isn't entirely the result of the production's low budget.  The annals of film and television SF-shows are replete with many works where good direction covered up a paucity of production values, and still conveyed the sense of the exotic so necessary to a freewheeling space-opera.

Like STAR ODYSSEY, STARCRASH dispenses with the Skywalker-esque "callow youthful hero" plotline of STAR WARS and centers its narrative on the Solo-esque "tough experienced outlaw-hero."  In fact, STARCRASH deals with two outlaw-hero, glamorous Stella Star (looking a lot like comic-book character Vampirella in early scenes) and dippy-looking Akton (Marjoe Gortner).  The beneficent emperor of their far-flung galactic empire (Christopher Plummer) decides for some reason that these clever lawbreakers are perfect choices to discover the nature of a great superweapon by an evildoer named Darth, er, Zarth (Joe Spinell). On top of that the emperor wants them to keep a watch out for his missing son Simon, who went looking for the same superweapon.  Despite their brushes with the wrong side of the law, Akton and Stella turn out to be totally stand-up heroes who risk their lives without a qualm.

As studiously derivative as the plot is, there might have been some hope for the film as basic entertainment-- rather the way one can enjoy Roger Corman's BATTLE BEYOND THE STARS despite its near-total dependence on both STAR WARS and THE MAGNIFICENT SEVEN.  But as is often the case with Italian-directed movies with American stars, the cockeyed dialogue pushes STARCRASH into the realm of "good-only-for-being-outrageously-bad."  Moreover, leads Caroline Munro and Marjoe Gortner, though never known for superlative acting, were apparently told by their director to over-emote in nearly every scene.  For some reason, only Christopher Plummer and-- agh!-- David Hasselhoff manage to seem halfway sane, no matter what ridiculous lines they must speak.

One minor interesting aspect is that this is one of the few STAR WARS imitations in which the female heroine, Stella, is the main "star" of the story, since Akton disappears on his own separate mission for long sections of the story.  But since the production didn't spring for fight-coordinators, Munro, like Gortner, looks pretty dorky in her fight-scenes.


Posted by Gene Phillips at 3:48 PM
Email ThisBlogThis!Share to TwitterShare to FacebookShare to Pinterest
Labels: combative adventures, the marvelous