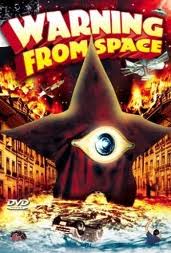 I decided to bracket these two 1950s SF-films because one is called simply THE COSMIC MAN, while an alternate title for WARNING FROM SPACE is "The Cosmic Man appears in Tokyo."  Both are slightly dull, obviously under-budgeted timekillers that judge man for his shortcomings but don't have much to offer beyond a little light polemic.

As many before have observed, COSMIC MAN is not much more than a colorless recapitulation of the storyline of 1951's THE DAY THE EARTH STOOD STILL, minus the cool robot and the parallels to Christian mythology.  The Cosmic Man (John Carradine, not evincing more than his usual sonorous voice) comes to Earth to poke around and study the humans' primitive ways.  Officers of the military are freaked out by his giant ping-pong-ball spaceship, which no instruments can penetrate.  Resident scientist Karl Sorenson attempts to offer a voice of reason and ends up being contacted by the curious alien.  The military doesn't like that and attempts to shoot the Cosmic Man down like a dog, but he wears a shield that foils all their efforts.  Cosmic Man also befriends a young woman and her son (standing in for similar characters in DAY), but they are if anything flatter than the scientist and the colonel in charge of the military task force.

Director Herbert Greene and scripter Arthur C. Pierce create almost zero suspense in their scenario, attempting at the eleventh hour to duplicate the Christ-motif of DAY by having the Cosmic Man sacrifice his life for the young boy but then "rise again"-- or at least, it's implied that he may live again after his dead body gets teleported away.

The film's only distinction is that this was Pierce's first SF-script.  Pierce would go on to script and direct a handful of minor SF-films, the best of which was 1960's BEYOND THE TIME BARRIER.


WARNING FROM SPACE is a good deal less preachy, though it does make a few comments about human beings' unreasoning fear of the unknown, giving it a slight similarity to 1953's IT CAME FROM OUTER SPACE.

In this case, however, the aliens aren't merely passing through.  Rather, the starfish-shaped creatures have observed that a mammoth meteor is approaching Earth.  The aliens attempt to warn human beings, but they arouse only fear.  Finally one of them assumes human form and makes human beings aware of the danger.

From that point, the remainder of the film deals with humanity's attempt to divert the meteor.  Oddly given Japan's experience as the first target of a nuclear weapon, a nuclear device proves the only method by which the deadly meteor can be diverted.   Still, I can't help but feel that the scripters were simply borrowing from the GODZILLA scenario in this respect.

WARNING, while not long on thrills, nevertheless does well with the costumes of the starfish-aliens.  They'll strike some viewers as risible, but the thing I enjoyed most in the entire picture was a skillful time-lapse sequence in which the alien-turned-female agent slowly transforms back into starfish-form.  It was the one part of the film that attempted to put across the "sense of wonder" in the best SF-cinema-- something that the later COSMIC MAN dismally failed to communicate.
Posted by Gene Phillips at 3:42 PM
Email ThisBlogThis!Share to TwitterShare to FacebookShare to Pinterest
Labels: the marvelous