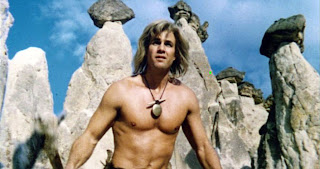 
These two films, made in different countries and belonging to different genres, still resemble each other in featuring heroes who race around their planets, encountering all sorts of weird dangers, but never impeded by anything resembling a strong plot.

Of the two, YOR THE HUNTER FROM THE FUTURE -- based on an Italian comic book, and compiled from a 4-part Italian TV-miniseries-- remains popular with lovers of "bad movies" precisely because the flick is so unabashedly simple-minded.

The film, directed by long-time genre-workhorse Antonio Margheriti, begins as if it were a caveman-and-dinosaurs film, since it starts out with the muscular Yor saving a girl named Kala and her father-like protector Pag from a big dino.  Yor, in addition to being the only blonde caveman in sight, wears a strange metal medallion.  He knows only that he had the necklace with him in infancy, when his tribe found and adopted him.  He's not exactly obsessed with trying to find out where he came from, but this mystery will be largely the only thing close to a coherent plotline in the film.

No sooner does Yor save Kala and Pag then he has to save two more times, from blue ape men and from diseased-looking desert-dwellers.  However, as if in imitation of the many "blonde goddesses" seen in jungle films, the desert-dwellers have a blonde goddess of their very own, name of Moa, who just happens to be wearing a medallion just like Yor's.  In addition, there's a big piece of ice in the desert-people's cave-- ice which has a humanoid figure inside.  In Margheriti's one concession to science-fiction verisimilitude, the script does mention that this isn't ordinary ice as it only melts very slowly, thus supplying the leprous-looking types with a motive to hang around the human icicle.

Yor manages to fight off the desert-lepers and escape with Moa, Kala and Pag.  Moa doesn't get a chance to tell Yor much about her obscure origins, though, for when Yor's back in turned, jealous Kala tries to kill Moa.  But just so the audience doesn't feel Kala's a bad person, some more ape-men intrude, starting a fracas in which Moa is conveniently killed.

Eventually Yor and company arrive at a fishing-village, where Yor kills another man-eating dinosaur.  The village tries to reward him by giving him a hot young virgin-- who's more than a little eager to be the reward-- but Yor has learned from sad experience to value monogamy, and turns the little nymphet down.  Yor gets all the babes-- which is probably the main reason this cheesy trashfest is still popular.

A village elder explains that they also fear an attack by mysterious "gods," for one of their number accidentally killed a god who visited them.  Shortly thereafer, sky-ships blast the village to pieces.  Yor gets hold of a boat and with his buddies tries to travel to the island where the gods make their home.  He's separated from his friends but learns the Big Truth: their world was once more advanced, only to fall apart due to atomic chaos (which presumably explains the rebirth of the dinos).  The all-too-human gods comprise the last of the once-advanced civilization.  But there's a schism in the works: the culture is ruled by the extremely Darth Vader-ish "Overlord," who cast out Yor's parents, and Yor himself as an infant, for having threatened his reign.  Fortunately, for Yor and his friends, the forces of the, er, rebellion are still active, and with their help Perseus takes down his evil grandfather Acrisius-- oops, wrong myth.  Then Yor flees the island to go back to fighting dinosaurs.

The same year's SPACEHUNTER shows off better acting and better production values, but though it too has a hero and his aides running around a planet with a fuzzy goal, it's not as much fun.

Three beautiful survivors from a destroyed space cruiser are cast away upon a failed colony world plagued by disease.  They're promptly taken prisoner by the risibly named "Overdog," (Michael Ironside) who rules with an iron hand-- or rather, a pair of iron claws built into his cyborg body.  Overdog's act provides a reason for authorities to send a mercenary in quest of the women, though they themselves are never important characters.

Peter Strauss plays a raffish "lone wolf" hero, appropriately named "Wolff," a bargain-basement Han Solo type.  He and his robot partner (Andrea Marcovicci) descend to the planet and promptly get into a firefight with some scruffy locals.  The robot is destroyed, but Wolff stays on the trail.

He doesn't get to remain alone for long.  A packrat-looking young girl named Niki (Molly Ringwald, several years away from being a star) tries to steal his transportation, but despite this "meet-aggravating" he consents to let her be his guide on the hostile world.  Shortly after this encounter, Wolff is attacked by an old competitor, Washington (Ernie Hudson), who's also planning to liberate the women for a reward.  Wolff knocks his rival around and steals his transportation.

Niki doesn't prove to be much of a guide, as twice she fails to lead Wolff clear of dangers, including mutant baby-creatures and a race of lake-dwelling Amazons.  Finally the two of them encounter Washington again and Wolff is forced to make a deal to split the reward to get the other mercenary's help.

The two mercs penetrate the fortress of Overdog, where the cyborg holds arena-contests to find the most spirited subjects-- whom he then subjects to a machine that drains their life force into him.  Niki also sneaks into the fortress without Wolff's knowledge and ends up running a gauntlet of dangers in the arena.  Her reward for this is to have her life-force tapped by Overdog, who explains that he needs her youth because "I'm very old."  That probably wasn't the first time she heard that line. 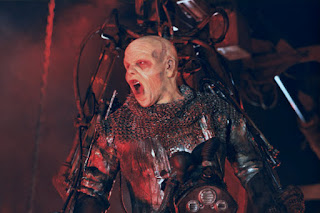 Wolff and Washington succeed in taking down Overdog with a big explosion, and the three heroes escape with their prizes.  The action is decent if a little predictable, though certainly better than one might expect from Lamont "LIPSTICK" Johnson.  I liked the designs of the weird alien vehicles, but the cyborg-costume of Overdog isn't much to speak of.

Possibly the best aspect of SPACEHUNTER is the ersatz "father-daughter" vibe that grows between Wolff and Niki, best illustrated by a scene in which he gives her a bath because he's sick of looking at a dirty urchin.  It sounds like the sort of scene that could become creepy, but Johnson does keep it clean, and even makes the scene faintly amusing.