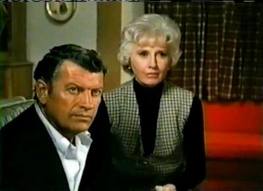 
I happened to screen close together these two 1970s telefilms, whose only other common bond is that they star acclaimed Hollywood actresses in their mature years, and that they share marvelous phenomenality.

REVENGE! recalls the 1960s vogue for featuring older actresses in horrific roles, what some wag once styled as "granddame guignol."  Indeed, the vogue would continue throughout the 1970s, and Winters had already made her first contribution to that corpus of films in the same year with WHAT'S THE MATTER WITH HELEN?

In Joseph Stefano's brisk script, adapted from a suspense novel, Winters' character Mrs. Hilton is out for "revenge."  Her knocked-up daughter committed suicide thanks to her rejection by the baby's father.  Mrs. Hilton, who happens to own a house once used by an earlier owner to confine his mad wife, gets the idea to visit vengeance upon her daughter's seducer.

However, the mad lady captures the wrong person: innocent businessman Frank.  Confined to a basement, Frank denies being the guilty party.  Fortunately for him, Mrs. Hilton dearly wants a confession and apology, though it's not clear whether she plans to kill him anyway.  Thus she keeps Frank alive, long enough for his wife Diane to miss him.

Becoming frantic at her husband's unaccounted disappearance, Diane ultimately seeks the aid of psychic Mark Hembrec (Stuart Whitman).  However, in the story's most devious twist, Hembrec is a fake psychic, but Diane's turmoil unleashes real powers in herself.  She guides Hembrec to the Hilton house without even consciously identifying it as the place of her husband's captivity.  After that, the film plays a waiting game: will the two investigators tumble in time to save Frank?

REVENGE is a taut suspense-flick and nothing more.  There's potential for some metaphysical speculation once Hembrec the Faker is convinced that psychic powers do exist, but nothing comes of it.

THE HOUSE THAT WOULDN'T DIE was adapted by one Henry Farrell from yet another original novel.  Farrelll's credits were pretty strong in the "granddame" department, as he contributed to WHATEVER HAPPENED TO BABY JANE, HUSH, HUSH, SWEET CHARLOTTE, and the aforementioned WHAT'S THE MATTER WITH HELEN.  The director this time out was the well-seasoned John Llewellyn Moxey, who delivers a strong spooky atmosphere.

Granddame though Barbara Stanwyck was at the time, she plays a straight heroine-type, one Ruth Bennett.  Ruth's own aunt dies and leaves her an old house dating from the Revolutionary War.  Ruth plans to move in and invites her adult niece Sara (Kitty Winn) to come along.  Little is said about Sara's family but given that Ruth and Sara have a close mother-daughter relationship, it appears Sara's own mother is dead.  While Ruth and Sara look the old place over, they make the acquaintance of two locals, both aged appropriately for each woman, young Stan (Michael Anderson Jr) and mature Pat (Richard Egan).

Then, after a little prefatory spooky stuff, a spirit possesses Sara, who attacks Ruth.  Sara later recovers without knowing what happened.  Ruth wants to know what happened to her niece, and begins researching the past of the house.  Pat also gets possessed, giving Ruth a brutal kiss and later getting into a fight with Stan.

With the appropriate research in hand, the victims reconstruct the house's history: that there had been a family in which a father murdered his daughter and her lover for having defied his wishes.  The daughter has been possessing Sara, while the cruel father has been inhabiting Pat.  There's no mention as to why the spirit of the lover doesn't show up. Maybe because it's not his dwelling-place?  There's a strong climax in which Ruth is finally able to lay to rest both unquiet spirits.

In contrast to REVENGE, there's a slight degree of mythicity here, suggested by the implied Freudian family romance in the story.  I have not read the novel on which the film is based, but even the bare outlines of the ghost-story seem to suggest paternal jealousy of the young couple, though there's a little diversionary material in that the murdered lover and the father took the opposite sides in the war.

Aside from this aspect and Moxey's sure hand with the supernatural, Stanwyck's gritty attitude is the best aspect of HOUSE.
Posted by Gene Phillips at 3:48 PM
Email ThisBlogThis!Share to TwitterShare to FacebookShare to Pinterest
Labels: the marvelous