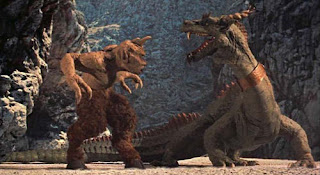 The keener and the clearer is the reason, the better fantasy will it make.-- Tolkien, ON FAIRY STORIES.

Years ago I remember reading a hostile review of Ray Harryhausen's CLASH OF THE TITANS in which the reviewer stated his opinion that such films were about nothing but creating as many impossible things as possible.

There was a certain degree of truth in this, but what the reviewer missed was that a good fantasy-filmmaker doesn't just choose "impossibilities" at random.  Much of the quality of such a genre-film rides on the creator choosing the *right* impossible things.

As it happens, the difference between choosing things the right way versus the not-so-right way can be seen via a comparison of two contemporaneous films, 1958's SEVENTH VOYAGE OF SINBAD and 1962's JACK THE GIANT KILLER.  The first film, whose stop-motion effects were masterminded by Ray Harryhausen, is renowned as the first of Harryhausen's feature films in the genre of magical fantasy.  The second film-- which shared VOYAGE's producer, director, and two of its actors, but not Harryhausen on effects-- is clearly an attempt to duplicate the success of the previous film.  JACK, though far from being the worst cinematic "knock-off" ever made, fails to choose the "right impossible things."

The lack of Harryhausen seems to have made the most difference in quality, for Nathan Juran's direction in VOYAGE is winsome while his work in JACK seems desultory.  The scripters of record-- Ken Kolb for VOYAGE, Orville Hampton for JACK-- were jobbing screenwriters. neither of whom were known for a large repertoire of superlative scripts.  If anything, Hampton had worked on more metaphenomenal films, yet Kolb's script catches just the right blend of the wondrous and the prosaic, while Hampton's is largely pedestrian.

VOYAGE weaves together three principal Arabian Nights concepts: the concept of the obedient genie-in-the-lamp, patently made famous by the tale of Aladdin, and two of the storied voyages of Sinbad.  One of these concerns Sinbad's attempt to free himself from a desert isle with the help of the gargantuan bird "the Roc," while another deals with Sinbad and his men being trapped on an isle with a huge cannibalistic man-beast.  The last story quite possibly traces back to the Cyclops episode of the ODYSSEY, so it's fitting that Harryhausen combines elements of Odysseus' adventure with that of the Arabian Nights hero. The one element not common to any of these particular borrowings, though one strongly associated with "fairy tales" generally, is VOYAGE'S main plotline: "the rescue of the maiden/bride."

When Sinbad's ship first strays near the Isle of Colossa, the captain is on his way to Baghdad with his betrothed Princess Parisa.  Sinbad-- apparently once a commoner, but now the adopted son of the Sultan of Baghdad-- is scheduled to marry Parisa of the kingdom of Chandra, thus cementing good relations between the rival powers.  Nevertheless, for once love and politics do go together, for Sinbad and Parisa are genuinely in love.

Sinbad orders the ship anchored off Colossa, after which he and his men go ashore for provisions. Instead they are obliged to come to the rescue of a stranger, Sokurah the Magician, who is being chased by a giant man with one eye and goat-like legs.  The sailors seem doomed to defeat, but Sokurah summons a genie from a lamp-- a lamp we later learn was filched from the giant's treasure-trove-- and commands the genie to block the giant with a wall of force.  The giant is stymied long enough for Sokurah, Sinbad and the sailors to flee back to their ship in a longboat.  However, in the process Sokurah loses the lamp, which the cyclops later reclaims and returns to his treasure-cave.

Without lingering on fine details, the magician, still desperate to acquire the lamp, decides that he will move heaven and earth to use Sinbad as a catspaw.  When bribery fails, Sokurah arranges to foil the adventurer's nuptials by secretly casting a spell on Parisa, shrinking her down to doll-size.  Sokurah tells Sinbad that nothing can cure the afflicted woman save a potion made from the shell of a Roc's egg-- which means that, whatever his suspicions, Sinbad must take the magician back to Colossa in the hope of curing Parisa.

Though the adventures that follow do indeed set up the hero's encounter with many "impossible things," the script is superlative at rendering the wonderful things more believable by using the prosaic as a counterpoint.
To get to Colossa, Sinbad must employ freed convicts as part of his crew, which of course creates an assortment of non-fantastic problems.  Twice the shrunken Parisa uses her size to help Sinbad in what seem mundane ways-- freeing the captain and his men from the cyclops' cage by unlatching the lock, or descending into the lamp of the genie Barani in order to gain his help. Moreover, while the emotional range of the characters is necessarily simple, it's never simplistic.  When Parisa learns that Barani, having been imprisoned in the lamp for thousands of years, wants only to be a mortal boy, her quasi-maternal compassion stands in contrast to Sokurah's desire to use Barani as a slave.  And though the cyclops does not speak and has no "origin-story," even this creature has a certain ferocious dignity.  Harryhausen's aesthetic attention to detail extends to the evocative fairy-tale sets and settings, while the Oriental-esque score by Bernard Herrmann easily matches the rich visual imagery. 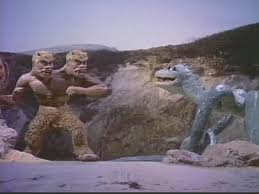 In contrast, JACK THE GIANT KILLER uses many of the same elements seen in VOYAGE but succeeds in giving them at best only a trifling degree of mythic resonance.

Whereas Harryhausen, Juran and Kolb managed to find common ground between the original Sinbad-tales, the Odyssey, and the basic "princess-in-peril" story, Juran and Hampton seem to have chosen the "Jack the Giant Killer" stories simply because it suggested a way to work in a lot of titanic creatures.  The special effects team-- of whom the best known members were Jim Danforth and Wah Chang--  follows the pattern Harryhausen set in a mechanical fashion. If Harryhausen began VOYAGE with a giant, satyr-legged creature menacing normal-sized humans, then JACK does the same.  If VOYAGE had actors Kerwin Matthews and Torin Thatcher locked in combat as respective hero and villain, so must JACK-- though Thatcher plays a different type of character, if not a particularly successful one. If VOYAGE has a genie in a bottle, JACK has a leprechaun in a  bottle. If one of VOYAGE's climactic scenes pits its cyclops against a green dragon, JACK must have a two-headed giant battle a giant green sea serpent.  The last conflict contains an element of probably unintentional humor, when the tentacled sea serpent "bitch-slaps" the giant across both of its ugly faces.

The most interesting alteration in JACK is that though Jack, just like Sinbad, spends most of the film attempting to free a princess from an evil sorcerer, Elaine lacks the elegant simplicity of Parisa, and registers as nothing more than a cypher.  She becomes more visually interesting when the sorcerer Pendragon uses his Satanic magic to morph Elaine into a witchy beauty, but she isn't evil in any interesting way, and doesn't really do anything that evil before Sinbad manages to transform her back to normal.

Whereas Harryhausen and Kolb apparently had an instinct for combining different strains of myth and folklore, Hampton's script simply imposes a superficial conception of "evil witches" over the template of Jack's giant-killing adventures.  Only once does Pendragon do something authentically "witchy," when he conjures in the name of Isis while kissing a skeleton's hand, but the script merely throws this bit of magical detail out with no context.

Though VOYAGE's Sokurah is no more complex than Pendragon, his motives for gaining the supreme power over the lamp has a strong elemental appeal.  In contrast, there seems to be no particular reason as to why Pendragon wants control over the kingdom of Cornwall.  Too often Pendragon's demons, when not being rendered in stop-motion, appear as nothing but actors in monster-suits, and many of the stop-motion creatures have plastic-ky eyes, detracting from any sense that they might be alive.

JACK is not a terrible film, but it has no imaginative center.  VOYAGE is using myth and folklore for entertainment aimed at juveniles, but it comes much closer to the tone and feeling of the originals.


Posted by Gene Phillips at 4:13 PM
Email ThisBlogThis!Share to TwitterShare to FacebookShare to Pinterest
Labels: combative adventures, the marvelous