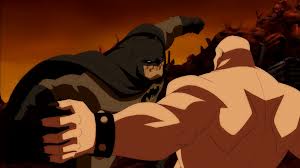 
Frank Miller's 1986 graphic novel THE DARK KNIGHT RETURNS presents almost the same adaptation problems as the Moore-Gibbons WATCHMEN of the same year.  Both graphic works presented highly idiosyncratic visions of the American superhero genre.  Miller made direct use of Batman and a handful of other DC characters, while Moore and Gibbons used a group of DC-owned characters as a template for their otherwise original "Watchmen."

Given that both works were extraordinarily popular, one should expect that any adaptations would be required to follow the originals very scrupulously-- perhaps so scrupulously as to eradicate any chance for the adaptors to evince their own creativity.  Such was the case in respect to the 2009 live-action adaptation of WATCHMEN.

The adaptation of TDKR has one advantage over the 2009 WATCHMEN.  Since TDKR is animated, it's better able to emulate the idiosyncracies of the Frank Miller art than the live-action WATCHMEN could emulate its model.

Further, Miller's approach to his narrative was less "monumentalist" (in Nietzsche's sense of the word) than that of Moore-Gibbons.  WATCHMEN is structured like a novel, or perhaps (to use one of Moore's repeated images) like the interdependent parts of a mechanical clock.  Miller's narrative is more organic, alternating scenes full of tense, terse suspense with sudden outbreaks of chaos and violence.  This form of narrative made it possible for director Jay Oliva and scripter Bob Goodman to keep the essential plotline of the graphic novel but also to improvise a bit more. I won't dwell on the improvised scenes except to say that none of them work as well as the corresponding scenes from Miller's narrative.  However, none of the improvisations detract from the mordant, tough-as-titanium-nails story, so at least they do no harm. At most, the bisection of the narrative into two separate DVDs led the script for Part I to elide the continued presence of Superman, who's almost the only other costumed character still extant in Miller's world. Thus, the whole Superman subplot-- in which the Man of Steel has become the obedient puppet of the American government-- gets crammed into the 76 minutes of Part 2, instead of being worked into the first part and creating a proper sense of anticipation for the "titans' clash."

Only in respect do Oliva and his animators successfully go beyond what Miller did.  Miller's visual narrative favors a "quick-cut" strategy, in which every panel quickly conveys some key information or insight.  Even the two big fight-scenes from the novel's second part-- both involving Batman taking on the hulking "Leader of the Mutants"-- depend on quick cuts and close-ups, so that there is no space allotted for the involved fight-choreography characteristic of many superhero features.  Oliva happily does not follow Miller in this approach, and instead gives the audience two well-choreographed punchups between the two bulky opponents.
The worst aspect of TDKR is that it backs off on Frank Miller's trademark hardboiled language.  Anyone who hasn't read the GN may not notice the omissions, but the video will be horribly sanitized to anyone expecting fidelity to Miller's dialogue.  For example, in the GN a Gotham citizen is asked by the media for his reaction on Batman returning to crimefighting after a ten-year absence.  The citizen enthusiastically approves of Batman's return and hopes that "he goes after the homos next."  The video uses the same citizen but reduces the character's line to something so bland that I don't even remember it.  The video-producers probably feared that had they used Miller's original line, some pundits, much like those Miller satirizes, would have jumped on the video, accusing it of "gay-bashing" despite the fact that it's clearly meant to be an ironic condemnation of the person speaking it. But while the video's self-censorship makes good business sense, it nevertheless reduces the integrity of the story. 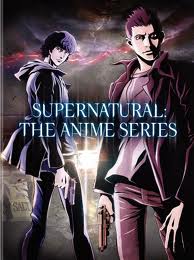 Though TDKR is at least a creditable adaptation, SUPERNATURAL THE ANIME SERIES demonstrates that some ideas just don't lend themselves into animated spin-offs.

There's nothing intrinsically wrong with the idea of Japanese storytellers providing their take on an American series, or vice versa.  And given that the live-action SUPERNATURAL has provided some strong scares and shocks throughout its eight seasons, one might expect that some Japanese artists might be able to ring in their own cultural approach to horror.

Unfortunately, the twenty-two episodes of this Japanese TV show-- whose segments are introduced by the live-action stars Ackles and Padalecki-- tend to plod along, offering few shocks and seemingly concerned with riffing on the live-action series' mythology (only from the show's first two seasons).  There are many metaphenomenal series-concepts whose mythology is loose enough that an animated show can riff on it to good effect, but SUPERNATURAL is not one of them.

The animators clearly like the seriocomic appeal of Dean, barely getting any of Sam's mojo.  Not surprisingly, the Winchester Boys end up fighting a few more Japanese demons-- a *kappa,*  a poverty-god-- than they would ordinarily encounter.  Even the better episodes rate no better than a "fair" episode of the live-action series.  Toward the end of the DVD, I did get one laugh: when Ackles and Padalecki say to their audience, "Really? You're still watching our lame promos?"