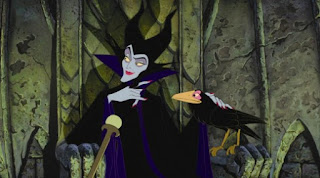 It could be argued that SLEEPING BEAUTY is the first “Disney prince” film, since so much of the action revolves around the male lead.  Certainly my best childhood memories of the film—possibly in an early re-release, as I would’ve been age four for the first release—are of the bravura closing act of the film, with particular emphasis on Prince Philip’s escape from the castle of Maleficent.  As a child I was particularly fascinated by the magical transformations in the escape-scene, wherein the Three Good Fairies change arrows into flowers, or protect Philip from boiling oil with a rainbow.  This was perhaps my first exposure to an “otherworldly fantasy” in the form of a full-length film, though I imagine I’d seen short cartoons on similar subject matter.


Two earlier “princess films,” SNOW WHITE and CINDERELLA, followed a pattern common to many European folktales, in which a girl of high standing is reduced to domestic drudgery, only to recover her former status by marrying up. What this trope meant in the folktales has received a good deal of speculation, but in this essay I can only deal with what it may’ve meant in the Disney films.  For SNOW WHITE and CINDERELLA, it’s essential that the central female characters should accept their domestic duties with grace and good cheer.  This in turn earns them the regard of woodland creatures and of supernatural benefactors, both of which are oriented on helping the “princess-brought-low” to escaping the life of drudgery through marriage.


SLEEPING BEAUTY is not the same sort of animal.  Though the Disney film works in a sequence about Princess Aurora being raised in lowly circumstances—though to be sure, she never knows any other state of affairs—the main trope of the original folktale is that of “the princess enchanted.”  In the standard “Sleeping Beauty” narrative, the princess’ enchantment causes her and her kingdom to sleep for hundreds of years, until she’s awakened from her sleep by the kiss of a prince.
Though waking the princess with the kiss of a total stranger passed muster in 1938’s SNOW WHITE, for whatever reason the script of 1959’s SLEEPING BEAUTY chose a diametrically opposed approach.  Precisely because Aurora is raised in humble circumstances—a “fortunate fall” if there ever was one—she has the chance to “meet cute” with Philip, so that they can fall in love prior to discovering that they have already been engaged to one another by their parents.  This comic plot means that both Aurora and her kingdom don’t descend into sleep for more than a day or so, so that Aurora can be rescued, not by the mere stereotype of a marriageable prince, but by a true love aroused with no thought of one’s improvement in social standing.


Still, though many viewers might not mind the excision of domestic drudgery from Aurora’s program, it must be admitted that without these or something similar, Princess Aurora seems to have it a little too easy.  Without the necessity to show “grace under pressure,” she seems to exist for two purposes, to be beautiful and to be married.


All this said, it might not be correct to consider BEAUTY as either a “princess” or a “prince” film.  The true conflict is, for the first time in a Disney film, between two feminine forces—quite in contrast to the original folktales, where both good and bad fairies exist solely to establish the circumstances under which the princess is first cursed, and then allowed to survive the curse under certain conditions.  At times the whole thing is brought about by some functionary simply forgetting to invite the “bad fairy,” which brings about the whole conflict.


BEAUTY, in contrast, polarizes the forces of good and evil more decisively.  It’s no accident that malicious Maleficient isn’t invited; good fairy Meriwether makes this explicit.  Indeed, Maleficent is so deliciously in love with being evil that one imagines she might’ve cursed Aurora even if she had been invited.  The king-fathers of both Aurora and Philip are utterly impotent in this conflict, and neither child has a mother with any function in the story—doubtless because Maleficent and the Three Good Fairies subsume the roles of “bad mother” and “good mothers” respectively.  From the first, the battle-lines are drawn between the three fairy-sisters—who are chubby and somewhat competitive with another, but eminently forces of life—and cadaverous Maleficient, who rules a gloomy death-realm and has but one totem-animal, an unnamed raven, who provides her with affection.  Further, it could be said that the script takes the essence of the folktale’s concern—that of an enchantment that stands outside time—and reverses it.  Maleficent mocks Philip with the threat of keeping Philip imprisoned until he’s a bent old man, so that he cannot possibly be united with his ever-youthful beloved.  The fairies intervene to foil the time-binding enchantment and thereby to restore the proper alliance of young lovers.


Given this relatively cosmic scope— suggested in part by Maleficent’s claim to harness “the powers of hell”-- one might argue that even though Prince Philip slays the matriarchal dragon in the end, he’s just as much a pawn as Aurora in the fairies’ chess-game.  At the very least it seems evident that the fairies can’t conquer the Dragon of Death without Philip, and he needs their help just as much to counter Maleficent’s forces.  It’s an unusual take on the heroic tale, where mothers, even magical ones, usually do not participate much.  One can find a smattering of hero-tales in which male hero and female heroine team up to defeat evil—say, Buck Rogers and Wilma Deering, whose alliance dates back to 1929.  But how often can one see Buck Rogers defeat evil thanks to an alliance with Wilma’s mother?


In a DVD commentary on BEAUTY, it’s said that SLEEPING BEAUTY was the end of an era for Disney, due to the rising costs of making such sumptious, highly stylized fantasies.  Certainly none of Disney’s 1960s animated features are quite as ambitious as BEAUTY, and I’d say that even the best works of the Michael Eisner years—LITTLE MERMAID being among the main contenders—there’s not quite the same focus on otherworldly enchantment.

I've labeled the mythos of SLEEPING BEAUTY as being akin more to "drama" than "adventure" given that the heavy emphasis on romance, while I label it "combative" due to the invocation of a "good vs. evil" battle at the climax.

Posted by Gene Phillips at 2:07 PM
Email ThisBlogThis!Share to TwitterShare to FacebookShare to Pinterest
Labels: combative dramas, the marvelous