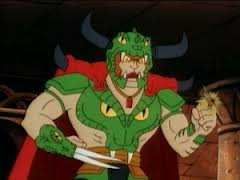 
There are many worse commercial telecartoons than CONAN THE ADVENTURER.  The thirteen episodes of the show’s first season sport some decent costumes and action-scenes, and reasonably literate—if politically correct-- scripts.  If the “Conan” name hadn’t been attached to the cartoon, one could enjoy ADVENTURER as an average iteration of “Dungeons and Dragons”-style adventure.


When the cartoon first came out, I for one was displeased by the serial’s attempt to coattail on the name recognition of the Conan franchise, given that the cartoon goes against almost every value of the Robert E. Howard prose-series.  ADVENTURER doesn’t even translate Howard’s values as well as the early Marvel comics-series of the 1970s or the 1982 live-action film, both of which remain the best adaptations of the Conan concept.  One could best think of this cartoon as “sorcerous-swords-and-sorcery,” for, in the producers’ attempt to appease the media watchdogs, Conan’s trademark blade never cuts anyone’s flesh.  This sword-- as well as all the weapons wielded by Conan’s multi-ethnic retinue of supporting characters-- only possesses the power to magically exile the heroes' foes, the evil serpent-men, back to their own dimension.  A glowing translation to another world thus renders this Conan-world as bloodless and aseptic as the 1983 MISTER T cartoon—which ADVENTURER sometimes resembles.


The most interesting facet of the series is one of literary detection: what elements did the writers borrow from the prose stories of Howard, and what elements came from the 1982 film?


The essential setup is certainly borrowed from the film.  In the John Milius-directed opus, Conan’s Cimmerian tribe, which has mastered the “secret of steel” handed down from elder giants, is annihilated by the marauders of evil wizard Thulsa Doom.  In the cartoon, Conan’s Cimmerians discover the power of a meteoritic “star metal” from which they construct weapons.  The metal is coveted by the serpent-men, invaders from an alien dimension.  Wrath-Amon, leader of the serpents, invades the Cimmerian village for the metal, but instead of slaughtering people, he contents himself with turning Conan’s parents and grandfather into stone statues.  This gives the young barbarian a pro-social motivation to dedicate his life to pursuing the evil wizard, not just for blood vengeance but to restore the lives of his kindred—which, predictably enough, the hero fails to do before the end of the first season.


The idea of the serpent-men, creatures able to move among humanity in assumed human forms, was conceived by Howard, though he made only one use of the concept, and the comic books only used it slightly more often.  It remains a good notion for a serial peril, though given the audience at which ADVENTURER aimed, none of the paranoiac potential of the idea comes through.  Still, there’s a minor charge to seeing Conan’s sword reveal the serpent-men’s true faces, even in this bloodless context, and the master villain Wrath-Amon is the strongest element of the series, both visually striking and given dynamic voicework.


Other bits and pieces of Howard-lore are worked into the stories, most of which are reinterpreted for the “PC police.”  A standout example is an episode that mentions a race of cannibals.  They’re given the same name as a tribe of black cannibals in a Howard story, but in deference to racial sensibilities, the cartoon’s cannibals are all white.


Particularly amusing are those episodes in which Conan is treated like the incarnation of “un-PC” tendencies, and his multi-ethnic buddies must teach the barbarian “Goofus” how to be “gallant.”  I might value some of these PC messages for their intent, if not their elegance of expression.  Still, it’s funny to see Howard’s Conan—who once boasts of breaking an ox’s neck to show off his strength—getting lectured on treating animals as his “equals.”


Though the series ends with the fate of Conan's relatives unresolved, the first season does end on a strong note, propelling Conan into direct combat with Wrath-Amon’s deific master, the serpent-god Set—an episode which is stronger for not having a single pro-social message in sight.