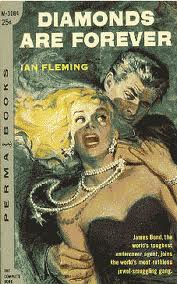 
The fourth James Bond novel boasted one of the most evocative titles in the series.  Roughly fifteen years later, that title would provide the germ of the theme song for the 1971 film.  The theme song “Diamonds are Forever,” along with the one from GOLDFINGER—both sung by Shirley Bassey— are possibly the most recognizable songs to be associated with the Bond franchise.


However, the novel is not one of the best Bond books, nor is the movie one of the better films, despite its being the last such film from the “Eon Productions” team to feature Sean Connery as Bond.  Both do have certain strengths, and neither is the worst in their respective categories, but their negatives tend to exceed their positives.


Whereas the second and third Bond novels emphasized larger-than-life villains, DIAMONDS the novel leans back toward the purely naturalistic world seen in CASINO ROYALE.  The book had its genesis in Ian Fleming’s readings on the real-life diamond smuggling trade, which he later used as the basis of a nonfiction work as well.


Sadly, though Fleming’s attention to verisimilitude is admirable as he has 007 follow a diamond smuggling pipeline in defense of British economy, verisimilude alone does not make a good novel.  The villains of the previous two novels are defined by their ethnic and/or cultural characteristics, and Fleming produced memorable Bond-foes in Mr. Big and Hugo Drax. But in DIAMONDS Bond’s main opponents are the two Italian-American gangsters who control the smuggling operation.  And though Felix Leiter repeatedly warns Bond as to how savvy American hoods can be, Bond shows little regard for this breed of American gangster, regarding them as vulgar and stupid, maybe only a grade better than the Bulgarian thugs excoriated in CASINO.  One of the master planners, Jack Spang, doesn’t appear on stage under the novel’s end, while the overt villain, his brother Serrafimo, has little personality and doesn’t even have the traditional hero-villain verbal exchange with Bond.  His only odd characteristic is that for no clear reason Serrafimo is a nut about the Old West, so much so that he maintains his own western ghost town, named “Spectreville.”  Apart from foreshadowing Fleming’s use of the word “spectre” for a criminal organization in a later book, the word here suggests to me the famous first line from DAS KAPITAL, in which Europe was haunted by the spectre of capitalism.  Of course Bond is hardly anti-capitalist given his defense of Great Britain’s right to exploit the diamond mines of Africa.  At most Bond merely dislikes American capitalism for being less classy than the European breed.


I’ve mentioned elsewhere that Fleming frequently portrays some of his villains as virtual freaks of nature, which can under the right circumstances lend an uncanny strangeness to some of his Bond narratives.  The author does this twice in DIAMONDS, making one gangster into a hunchback while another is described as looking “like a villain in a horror-comic.”  (Was Fleming aware of the censorship rage about horror comics in both his country and the United States?)  However, there’s nothing “strange” about these mundane hoods, so the “freakish flesh” trope remains naturalistic, in keeping with the rest of the novel.  Even the homosexual hit men Wint and Kidd, who provide some of the better moments in the film adaptation, are rather colorless.  Despite all this, though, the vulgar American thugs come very close to killing Bond, thanks to his foolish decision to provoke them, and the only thing that saves 007 is the book’s heroine Tiffany Case.


Though Tiffany’s name might conjure the feminist bugaboo of “making women into property,” the character is fairly independent despite being a cog in the smuggling ring, and doesn’t allow Bond, masquerading as a gem-smuggler, to take any liberties with her.  As she’s patently named after the famous diamond-dealing jewelry franchise, one might presume that Fleming meant her to have a mental toughness akin to the physical hardness of diamonds.  Her backstory establishes that she acquires this toughness the hard way, after having been ravaged by several thugs sent to terrorize a cathouse owned by Tiffany’s mother.  She is therefore one of Fleming’s favorite character-types, the woman who closes herself off from men because of an early encounter with poor specimens of that gender.  This sort of melodrama is legitimate enough in Fleming’s world, but he cheats on his own ground rules.  Bond makes a pass or two while under cover, but he really does nothing to melt down her icy reserve.  Yet, by novel’s end, Tiffany has very conveniently fallen in love with Bond, and so risks her own life to save him from Serrafimo.  He later rescues her in turn from Wint and Kidd, but the novel ends with the suggestion that Tiffany may still go to jail for past misdeeds.


The film DIAMONDS ARE FOREVER takes the opposite phenomenal approach to the novel.  The script keeps Wint and Kidd, a few minor gangsters (or just their names), and a version of Tiffany Case, who becomes a standard bimbo with no backstory.  But the Spangs are replaced by a bonafide Bond supervillain.  Ernst Stavro Blofeld, this time essayed by actor Charles Gray, repeats THUNDERBALL’s “hold-the-world-hostage” routine by launching an orbiting laser-satellite, which alone propels this film into the category of the marvelous.  Bond and Blofeld both use a fair number of other marvelous gadgets as well, but the satellite is one of the film’s best moments, capturing, even in its limited screen-time, the poetic horror of “death from the skies.” 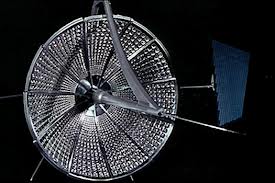 As one DVD commentary puts it, DIAMONDS—which followed the largely serious Bondfilm ON HER MAJESTY’S SECRET SERVICE—offered Eon’s producers the chance to retool the Bond franchise. One change involved the inclusion of more burlesque-style humor in the franchise.  DIAMONDS bad jokes aren’t as numerous as those of the early Roger Moore films.  Still, 007’s trademark anonymity—the raison d’etre of a spy—is cavalierly tossed to the winds when Tiffany Case apparently recognizes the name of James Bond as if he were a full-fledged celebrity.


It’s also said that the producers attempted in many respects to copy the model of their first thoroughgoing success GOLDFINGER.  What they seem to have copied most about GOLDFINGER was that film’s excision of all the drudgery of a spy’s work—tailing people, gathering information.  One didn’t expect a lot of that drudgery to appear in the film GOLDFINGER, but there’s still a tenous connective tissue between the plot’s events.  In DIAMONDS Bond pursues Blofeld’s trail in an erratic fashion, as the filmmakers seek to work in as many rapid-fire Michael Bay-style location-changes as possible.  I’ve seen 1940s superhero serials that showed more attention to verisimilitude than DIAMONDS evinces.


Whereas the novel strove to build an exacting model as to how the diamond smuggling operation took place—extending even to the means used by the gang-bosses to pay off their employees—the film DIAMONDS follows the diamond pipeline for the purpose of killing off the people associated with it.  Apparently (though this isn’t stated) Blofeld has pretty much acquired all the diamonds he needs for his gem-powered satellite, and sends assassins Wint and Kidd to follow the pipeline and kill off anyone who might be an unnecessary loose end.  By this time, however, British Intelligence has already assigned James Bond to the case, so Bond is also able to follow the pipeline and engage in contretemps not only with the two gay killers, but also various other Blofeld flunkies.


Thus, in contrast to the novel, here Tiffany Case’s life is in danger by her own employers.  This is illustrated about halfway through the film by the gruesome death of the comically named bimbo “Plenty O’Toole,” whom Blofeld’s hoods mistake for Tiffany.  Despite having been sentenced to death, though, Tiffany is later captured by Blofeld’s gang, but for some reason she isn’t simply knocked off. Instead Blofeld brings him to his sanctum sanctorum, where she proves to be of more ambivalent aid to Bond than she was in the novel.  Apparently we’re to assume that Blofeld took a shine to the girl once he met her, though this is still an insufficient reason to explain her survival.


Still, if one abandons any expectations of verisimilitude in viewing DIAMONDS, parts of it work very well as a kinetic assault on the senses.  Bond’s encounter with a faux “moon-landing crew” is poorly mounted, as is Bond’s escape from “death by cremation.” However, as noted earlier, I liked the film’s treatment of Wint and Kidd.  Their bland appearance makes them more credible as practiced stone killers, and their lines to one another evoke something in the line of a gay Laurel and Hardy.  The diamond-satellite provides the film’s best scene, though my second-favorite is the scene in which 007 nearly has his ass handed to him by two athletic Blofeld henchwomen, “Bambi” and “Thumper.”  Bond’s trouncing at their hands is not unlike the many beatdowns the prose-Bond suffers throughout that series, though I suspect Fleming would have stopped short of letting his hero get beat up by two women.  Still, Tiffany and Plenty are given such short shrift as characters that the near-victory of these two tuff girls might be seen as the revenge of the fair sex. 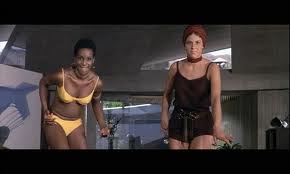 Finally, heresy though it may be, I liked Charles Gray’s icy take on Blofeld better than the previous two incarnations.  It’s interesting that there’s no mention in this film of Bond’s short-lived bride Tracy Draco, gunned down at the end of MAJESTY’S by Blofeld.  Perhaps the filmmakers were seeking to distance themselves from anything that suggested the more serious side of James Bond’s world—a mood they would later seek to exploit in FOR YOUR EYES ONLY.

Posted by Gene Phillips at 1:55 PM
Email ThisBlogThis!Share to TwitterShare to FacebookShare to Pinterest
Labels: combative adventures, the marvelous