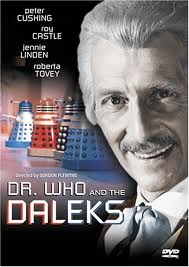 I reviewed the second of the 1960s "Doctor Who" films here, and found it "pedestrian" despite a better-than-average FX-budget for a British SF film of that period.  The first film evinces a smaller budget but a somewhat better script, even given the film-franchise's attempt to rewrite the "Time Lord" version of the character into a rather dithery Earth-scientist (potrayed in both films by Peter Cushing).

The script derives from an episode of the teleseries, which detailed the origins of the Doctor's most popular villains, the Daleks.  The Doctor, his two granddaughters and Ian (boyfriend of the older granddaughter) are accidentally propelled through time and space by the scientist's TARDIS time machine.  They end up on a planet that has endured nuclear devastation in the past.  Over the centuries the planet's inhabitants have split into two ethically opposed camps.   The Doctor's party first encounters the peaceful society of the "Thals," who live within what's left of nature, using a special serum to immunize themselves against the still potent radiation polluting their world.

In contrast,the Daleks remain sequestered in their fortress-city. having protected themselves from the radiation with ambulatory "suits" of metal that make them resemble small tanks.  They are entirely defined by their technology and yearn to destroy the harmless Thals, blaming them for the catastrophe though it's made clear that the Daleks triggered it. The Doctor and his friends naturally side with the Thals against the Daleks, in part because the latter creatures also aspire to conquer the Earthmen's planet.

The division of a species into the two races strongly echoes the Eloi/Morlock dichotomy of Wells' TIME MACHINE.  Wells presented the schism as a tragic inevitability, but  DALEKS takes a position not unlike that of George Pal's 1960 THE TIME MACHINE, where the hero educates the passive Eloi to fight against their oppressors.  Similarly, Ian gives the Thals a crash course in fighting back,and the Thals toss aside their pacifism in jig time.

One might surmise that this pro-war stance may have been designed to encourage in its audiences the general attitude of justified militarism.  Be that as it may, it does represent a greater dimension of sociological thought than I saw in the sequel. 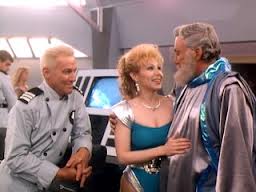 I can't say the same for the South African SF-adventure SPACE MUTINY, which most American viewers will know from the lambasting it received on "Mystery Science Theater 3000."

There's not much I can add to the many deserved cutdowns this film has received.  Despite lifting its FX-scenes from the teleseries BATTLESTAR GALACTICA, the film looks more like 1976's LOGAN'S RUN.  Admittedly the advent of STAR WARS's breakthrough in FX the next year made most SF-films of the 1970s look primitive by comparison.  But apart from bad FX, MUTINY like LOGAN'S suffers from some of the worst costuming ever seen in the history of SF-films.

Almost everything I could attack has been repeated ad infinitum, from the ghastly overacting of John Philip Law as the comically named villain "Kalgan" to the ridiculous "Enforcer vehicles" that move with all the speed of Zambonis.  Just to say something remotely original, I'll note that the heroine "Lea" does show herself capable, like her STAR WARS namesake of shooting a decent ray-gun, and she probably gets the film's best scene, gulling a stupid guard into thinking she's going to have sex with him.  But even adequate scenes are rendered risible by all those awful Disco-era costumes.
Posted by Gene Phillips at 1:53 PM
Email ThisBlogThis!Share to TwitterShare to FacebookShare to Pinterest
Labels: combative adventures, the marvelous