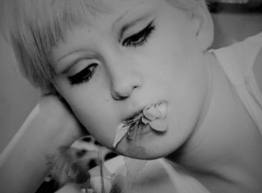 
I've no knowledge of the 1962 Fernando Arrabal play on which Alejandro Jodorowsky based his first feature-length film, but I rather wonder whether the original play was set in what Jodorowsky calls (in a DVD commentary) a "post-atomic" world.  By his own admissions throughout the commentary,
Jodorowsky never cares about the "nuts and bolts" aspect of science fiction.  What he consistently admired in the films he viewed in childhood-- FLASH GORDON, THE HUNCHBACK OF NOTRE DAME-- were the "monsters."

Thus there's little or nothing in FANDO's actual narrative to suggest that any of its strange inhabitants have survived a nuclear conflict.  Most of the story was filmed in the barren wilderness of Mexico, which may have appealed to Jodorowsky as emblematic of a post-apocalyptic world.  It's possible that I missed something in my two viewings of the film, with and without the commentary, but in any case I choose to regard as FANDO as "uncanny" rarher than "marvelous."

Jodorowsky sets his titular characters-- impoverished performer Fando and his paraplegic girlfriend Lis-- on a voyage of self-discovery that, like most ironies, will end badly.  In the course of their voyage they encounter blood-drinkers, transvestites, people who live in mud and an aged woman who represents herself as Fando's mother.  Both Fando and Lis act as if all of the strange people they meet are perfectly normal, suggesting that Jodorowsky wants to present a world where the very concept of normalcy is alien.

Jodorowsky is clearly versed in a variety of religious and spiritual texts, from the psychological studies of Jung to the world-weary meditations of Buddhism, but FANDO is not overly concerned with spirituality, but the failure of same.  The repeated visual trope of FANDO is one in which Fando is obliged to push Lis around on a wheeled cart as they seek the fabled "city of Tar," where they've heard that Lis may be cured.  In keeping with the fatality of an irony, they never find it.  More importantly, however, their mutual dependence on one another becomes a torment to both of them, and eventually culminates in a desolate conclusion.

FANDO AND LIS is never less than visually stimulating, and it's certainly true to the filmmaker's theme of the monstrous.  Whether or not it outshines his more famous EL TOPO-- which I have not viewed-- remains to be seen.
Posted by Gene Phillips at 2:28 PM
Email ThisBlogThis!Share to TwitterShare to FacebookShare to Pinterest
Labels: the uncanny, weird families and societies (u)