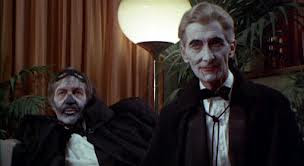 MADHOUSE, an Amicus/AIP co-production, is best remembered as Vincent Price's last starring film. For the next twentysomething years he would largely appear as a guest star or support-cast member (13 GHOSTS OF SCOOBY-DOO, anyone?)  Reputedly MADHOUSE did not make as much money as earlier and better known Price horror-thrillers, such as THEATER OF BLOOD and the two DR. PHIBES films, and so MADHOUSE may have contributed to Price's career downturn.  However, it might be argued that the "operatic" style of Price's horror films was on the way out anyway, thanks to the influence of grislier fare like THE EXORCIST and TEXAS CHAINSAW MASSACRE.

The concept of MADHOUSE clearly follows in the tradition of the Phibes films-- if only because the plot revolves around a mysterious masked figure killing people in bizarre ways. Director Jim Clark--  who spent most of his career as a film editor, with MADHOUSE his only noteworthy directing credit-- proved unable to deliver anything resembling the opulent look of the Phibes films.  Budget could be part of the problem, but many of Clark's setups are unimaginative and seem concerned merely with getting the story told.  This is a shame, because there's more psychological story-potential in MADHOUSE than in the wild but shallow films after which it's patterned.

According to this CINEFANTASTIQUE review, the script, executed by two writers with very little writing experience before or after MADHOUSE, took very little from its supposed source novel, Angus Hall's DEVILDAY, so I tend to credit writers Ken Levison and Greg Morrison with the basic attempt to bring more psychological heft to the story of Paul Toombes, an aging horror-actor who has gained new fame thanks to the reappearance of his old films on television.

However, the film opens on an incident that precedes the main story by several years.  Toombes (Price) holds a lavish party to celebrate his recent marriage to a much younger woman, Ellen Mason.  In attendance are three major players in the story.  First comes Herbert Flay (Peter Cushing), a friend of Toombes from his salad days, both a former actor and the writer-creator of Toombes' best-known character, "Doctor Death."  Second is another actor, Faye (Adrienne Corri), who worked with Toombes in one of his films and who, from her first scene, is clearly smitten with Toombes.  Third is Oliver Quayle (Robert Quarry), who introduces himself to Toombes in a scandalous fashion.  Moments after Toombes has extolled Ellen as the only woman he could ever trust, Quayle snarkily reveals that he is a maker of pornographic films and Ellen was one of his stars.  Quayle gets the reaction he wants: Toombes is furious with his wife-- ostensibly because she didn't mention her checkered past, but possibly because he thought he was getting virgin goods in the marriage-deal.  Toombes storms off, breaking up the party.  Much later, he seeks out his marriage-boudoir, intending to forgive Ellen-- only to find that she's been savagely murdered, and left in such a position that her severed head falls off when Toombes touches her (a pretty good trick if you can pull that off!)

Police suspect the famed horror-star of murder but they can't prove him guilty, and the murder goes unsolved.  Years pass, during which the films of Toombes, particularly with him playing the Phibes-like killer "Doctor Death," gain new fans through TV broadcasts.  Toombes is persuaded to journey from America to England to make a TV series reviving Doctor Death, but on the voyage there, he meets Liz, a young starlet who attempts to cozy up to him, hoping to coattail on his fame.  Not least because this reminds Toombes that he accused Ellen of being a career-climber, he rejects her outright.  Interestingly, just before Toombes encounters Liz, he wakes from sleep as the camera shows us the book he was reading, entitled MY OEDIPUS COMPLEX.  More on that later.

Toombes remains ambivalent about reviving the violent image of Doctor Death, particularly when he meets one of the producers of his show: none other than Quayle.  Toombes drily comments, "I thought television was a family medium," or words to that effect.  He has somewhat better relations with a young publicist named Julia, but Toombes is livid to learn that in this version of "Doctor Death" he's expected to team up with a female assistant, portrayed by Carol, a no-talent protege of Quayle's-- also possibly one of Quayle's bedmates.

Also in England Toombes meets his old friends Herbert and Fay, now married, but Fay is a sad case.  Thanks to a fiery car accident, she lost her natural hair to the blaze and lives in seclusion.  She's also developed a strange mania for mothering a brood of tarantulas, whom she treats as her babies.  Since she mentions that there were spiders in the one film she made with Toombes, clearly she's transferred her desire to bear Toombes' children to the arachnid critters that appeared in their one shared film.

Liz, the scheming starlet, is the first to be killed by a masked maniac dressed as Doctor Death.  Carol is another victim, and so are Liz's parents, who try to blackmail Toombes with evidence that might incriminate the actor in their daughter's death.  Up to this point, it seems fairly possible that Toombes has formed a double identity, in that all the victims are people who have affronted or annoyed him-- and two of them, like his wife of a day Ellen, were nubile career-climbers. Toombes worries that he may have become unhinged from his years of playing horror-figures.  He confesses to an interviewer that the appeal of horror-films is that they allow people to indulge "the impulses we don't admit we have" (a Freudian take if there ever was one).

However, it's the death of the first truly innocent victim, the likeable publicity agent Julia, that ends the suspicions of a double identity.  Following Julia's murder Toombes encounters and fights with the masked killer.  The murderer almost kills Toombes in a special "death-bed" devised for the TV show, but Toombes survives.  However, shortly later he appears to die in a fiery accident.

Only then does the audience learn that the murders were committed by Herbert, who resented that his "Doctor Death" character-- whom he intended to portray himself-- was taken away from him by the studio and given to Toombes.  Fay mopes about at the news of Toombes' death, but she's elated when Toombes appears at the Flay house, revealing that he faked his own death.  Toombes fights with Herbert, but Fay takes the side of her original love, stabbing Herbert to death and allowing his body to be eaten by her spiders.  For a crowning touch, Toombes, having grown sick of his own acting-persona, decides to let his normal identity remain dead, and decides to spend the rest of his days using makeup to masquerade as Herbert Flay, and live with the only woman who really loved him.

Folklorist Alan Dundes made an interesting-- and highly Freudian-- take on Shakespeare's play KING LEAR in an essay entitled "To Love My Father All."  Dundes compares LEAR to folklore-stories in which daughters are almost compelled to marry their own royal fathers, and argues that both in these stories and in LEAR, what is being conveyed is "a projection of incestuous desires on the part of the daughter," rather than the father, as most authorities tend to assume.

MADHOUSE does have some Lear-like overtones. Lear wants to be loved, or at least esteemed, by all of his daughters, but he learns that two of them only want the property he can give them.  Toombes is constantly being assailed by beautiful young women-- he jokes in the first scene about all the women he's "killed"-- but to his regret he learns that none of them want him for anything but career advancement.  Even Fay harbored some hope that Toombes might help her career, though unlike the younger women, she genuinely fell in love with Toombes.  It's clear from the lack of romantic scenes between Herbert and Fay that she married him as a distinct "second choice."

In other words, writers Levinson and Morrison pulled off a "Cordelia sneak."  LEAR is ostensibly about the King but may also (if one agrees with Dundes) be seen as mirroring Cordelia's desire to show herself as the daughter who truly loved her father for himself. MADHOUSE focuses on the aging horror-star, but the lens through which we see him is the lens of Fay's eye.  Toombes' experiences show him that all the younger women are no good for him, with the exception of the one innocent-- and she's not guilty of making any advances upon the older gentleman.  The only fit mate for Toombes is Fay, and she's the one with whom he ends up, having apparently turned as mad as she.

I'm sure many horror-critics have overlooked Fay's role in the story, focusing on the flimsiness of Herbert's motives. Viewers are asked to believe that Herbert decided to murder just one woman in Toombes' life, then apparently was satisfied with that vengeance for several years until the TV revivals stoked up his resentment again.  Even for a horror-thriller, this is weak tea-- though Herbert's weakness as a character makes much more sense in the story's design, if he is in reality of no more consequence than the forgettable King of France, Cordelia's husband in LEAR.

I can't be sure that the screenwriters came up with the bit of business with Toombes having an "Oedipus Complex" book to hand in one scene.  For all I know, that touch could have come from Price, or from Robert Quarry, who claimed he rewrote some of the film's dialogue.  But the book certainly complements the film's Oedipal thrust.  Actress Corri was almost 20 years Vincent Price's junior, so that she could have been his daughter at one point of his life-- yet she's also 20 years older than the "dollybirds" who seem to flock around the older man, trying to leech off him.  In comparison to them, she is more a "mother" than a "sibling"-- creating a confusion not unlike the LEAR play, where, as one source remarks, " Cordelia returns at the end of the play with the intentions of helping him, ultimately reversing her role as daughter to mother."

Posted by Gene Phillips at 4:44 PM
Email ThisBlogThis!Share to TwitterShare to FacebookShare to Pinterest
Labels: perilous psychos (u), the uncanny