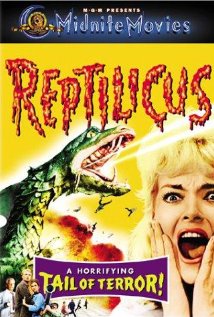 Confession time: I like at least one thing about REPTILICUS, and not in a "so bad it's good" way.

Long before I saw the Americanized version of Denmark's contribution to the Giant Monster Hall of Fame, I'd seen a few clips of the titular marionette-of-mayhem in the teleseries GOMER PYLE.  Gomer was apparently a big fan of watching old Repti at a drive-in theater.  At least I seem to remember the same clip(s) appeared in more than one episode-- which was presumably a shot at the maturity-level of giant-monster movies.

Though the film isn't juvenile as such, it certainly has more than its fair share of absurdities.  Reptilicus is a barely animated construct that makes even THE GIANT CLAW credible by comparison.  Though the critter looks about as durable as a pipe-cleaner, the narrative repeatedly insists that his scales are strong enough to repel shells from the local military.  Reptilicus also spits acidic poison, courtesy of crude animated effects added to the American release, but since they were interpolated in this belated fashion, they barely fit the existing continuity.

Also dragging down the film is one of the least likeable protagonists seen in any era of giant-monster films.  When first introduced to a group of cordial Danes, hook-nosed actor Carl Ottensen plays the American major Grayson as if he's got a major stick up his butt.  Maybe the writers were going for the sense of a military man resentful of his assigment to a desk job, only to meet a challenge like nothing he's ever experienced.  But if such was the intention, the script fails to deliver that irony.  Grayson softens somewhat when he meets a pretty UNESCO lady scientist, who comprises the film's most notable imitation of the American breed of giant monster-flicks.  Romance is back-burnered, though, in favor of assorted tours of the wonders of Denmark. Late in the film this bozo has the brainstorm that leads to Reptilicus' defeat, but the giant snake still comes off with more personality.

The film has one good aspect.  Reptilicus starts out as nothing but a dismembered tail naturally quick-frozen in ice.  From this little flesh-chunk the mighty monster regenerates itself into a fullblown force of carnage.  The cosmological intent here is to invoke the penchant of reptiles to regenerate lost legs or tails, though the idea of a creature regenerating itself the other way round is patent pseudo-science.  But if the script does nothing else right, it does set the challenging problem as to how to fight a monster that's less dangerous on its own than if it's blown into several pieces, all capable of similar regeneration.  Naturally the paltry FX-budget undermines the potential awe of this idea, but given modern-day advances in technology, a remake of REPTILICUS would have a leg (and a tail) up on any dozen of the lame "giant beastie" telefilms that show up on the Syfy Channel.
Posted by Gene Phillips at 12:39 PM
Email ThisBlogThis!Share to TwitterShare to FacebookShare to Pinterest
Labels: combative dramas, the marvelous