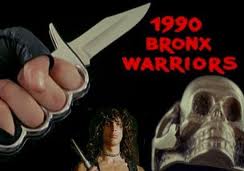 From THE WARRIORS Castellari and his collaborators essentially took the notion of colorfully costumed gangs battling one another.  The 1979 Walter Hill film takes place in a modern-day setting, however, so the essential concept of both films is more properly derived from John Carpenter's 1981 effort.  Both Castellari films take place in an oppressive future society where the gangs are posited as revolutionary forces against the tyrants.

The main plot-thread of ESCAPE FROM NEW YORK is that the hero is obliged to venture into hostile territory to save the President of the United States from the inhabitants of New York, now a massive high-security prison.  The first Castellari film, 1990: THE BRONX WARRIORS, keeps the basic idea that a person of influence-- in this case a wealthy heiress--- blunders into the "no man's land" of New York's Bronx, which is entirely ruled by the aforementioned Halloween-costumed gangs.  She's saved by Trash, the more or less beneficient leader of  a group called the Riders.  However, instead of negotiating with the Riders for the heiress' release, the government sends a hired mercenary named Hammer (Vic Morrow) to re-acquire the heiress (essentially altering the heroic character played by Kurt Russell in the Carpenter flick to an outright villain).  The hero, played by Mark Gregory, has a moderate raffish charm but the film benefits more from seasoned performers like Morrow and Fred Williamson, and some decent costume-designs. 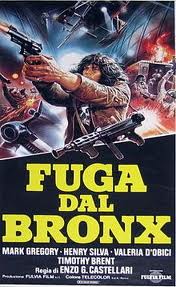 ESCAPE FROM THE BRONX ratchets up the sense of social inequity as the tyrannical government decides to force all inhabitants from the Bronx before razing it for a future development project.  Trash is again the hero, though he's lost his old gang; however, he recruits new adherents in his efforts to force the government out of his stomping-grounds and return the power to the gangs. The scenes in which the fascist cops are expelling the innocent lowlifes from their homes are the more potent sequences, but ESCAPE looks like it was shot with much less attention to action scenes and costumes, while between the shooting of the two films Mark Gregory managed to lose some of the sculpted musculature that made him look like a dystopian version of Italy's Maciste. Henry Silva is on hand in a role that duplicates that of Vic Morrow, but he's more subdued and therefore much less effective.
Posted by Gene Phillips at 2:42 PM
Email ThisBlogThis!Share to TwitterShare to FacebookShare to Pinterest
Labels: combative adventures, the marvelous